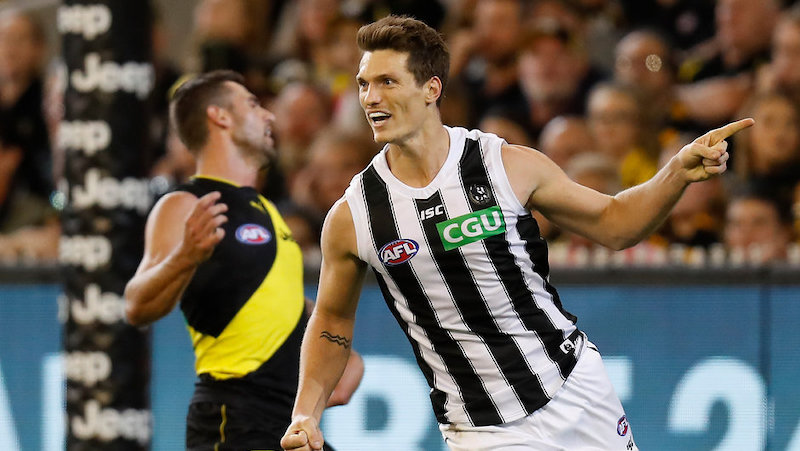 Round 19 of the 2019 AFL Premiership Season kicks off on Friday night with a blockbuster fixture that will see Collingwood take on Richmond at the MCG. Catch this huge clash from 7:50pm AEST.

There's a real live final fever on the DFS Down Under show at the moment! On Wednesday night Smatho and Hef paid particular attention to the qualifying contests among their weekly wrap up of everything DFS. Check out their thoughts on this particular match as well as the entire weekend of AFL football on Episode 24!

*CHECK OUT OUR MAGPIES VS TIGERS CHEAT SHEET*

The Tigers have been a team to target all season. They’ve conceded the second most fantasy points of all teams in the league, compared to Collingwood who have conceded the seventh least. However, over the past five games the Tigers have become a lot stingier, while the Magpies have gone in the opposite direction. For the most part, how you stack your line-ups in this slate will come down to how you see the game script unfolding.

There’s no significant difference between the two teams here. The Tigers are ranked 5th for giving up points to backs this season and the Magpies are 6th. The Tigers rank 4th for giving up points to centres, while the Magpies are 15th, although both are trending in opposite directions over the last five games, which makes it a fairly even position.

The forwards are one of the more interesting positions in this slate. You can see below that the Tigers rank 1st in the competition for giving up points to the oppositions top 3 scoring forwards. On the other hand, the Magpies rank 15th. Considering the likes of De Goey and Cox have gotten a hold of the Tigers in the past, it may be worth stacking Magpies forwards on Friday night.

The ruck is the other position that has a big difference in this slate. Obviously, the Magpies have an absolute superstar in Brodie Grundy, while the Tigers have a bunch of B and C graders in the ruck. Grundy looms as a set and forget type of play here.

Let’s take a look at some of the players we’ll be targeting on Friday night.

Mason Cox ($4,800 MB / $7,610 DS) – Not usually one to consider, but Cox’s record against the Tigers speaks for itself. Obviously, he had the monster game against them in last year’s Prelim, but that’s not the only time he’s caused the Tigers trouble. In fact, Cox has kicked 2+ goals in each of his last five matches vs Richmond.

Jordan De Goey ($7,300 MB / $11,280) – De Goey is another Magpie that plays his best footy when the whips are cracking, especially when the Tigers are the opposing team. He’s kicked nine goals from his last two matches against the Tigers.

Jeremy Howe ($5,900 MB / $8,810 DS) – Howe has also shown the ability to go big when he faces Richmond. The high-flyer has recorded 2x 100+ scores in his last three completed games against the Tigers, including a monster 131 against them in 2018. The 100 he scored against the Tigers in Round 2 this year is his highest score of the season so far.

Brodie Grundy ($11,400 MB / $17,520 DS) – The obvious play in this slate. He’s coming off a monster 181-point performance against the Giants last weekend and gets a look at a soft match-up again on Friday night. He’ll dominate whoever ends up lining up on him.

Adam Treloar ($10,300 MB / $15,640 DS) – The standout midfielder in this slate. Treloar absolutely loves playing against the Tigers. He had 152 against them earlier this year and 147 against them last year. Has 100+ scores in 12 of his last 13 games this season and there’s no reason why he won’t continue this trend. 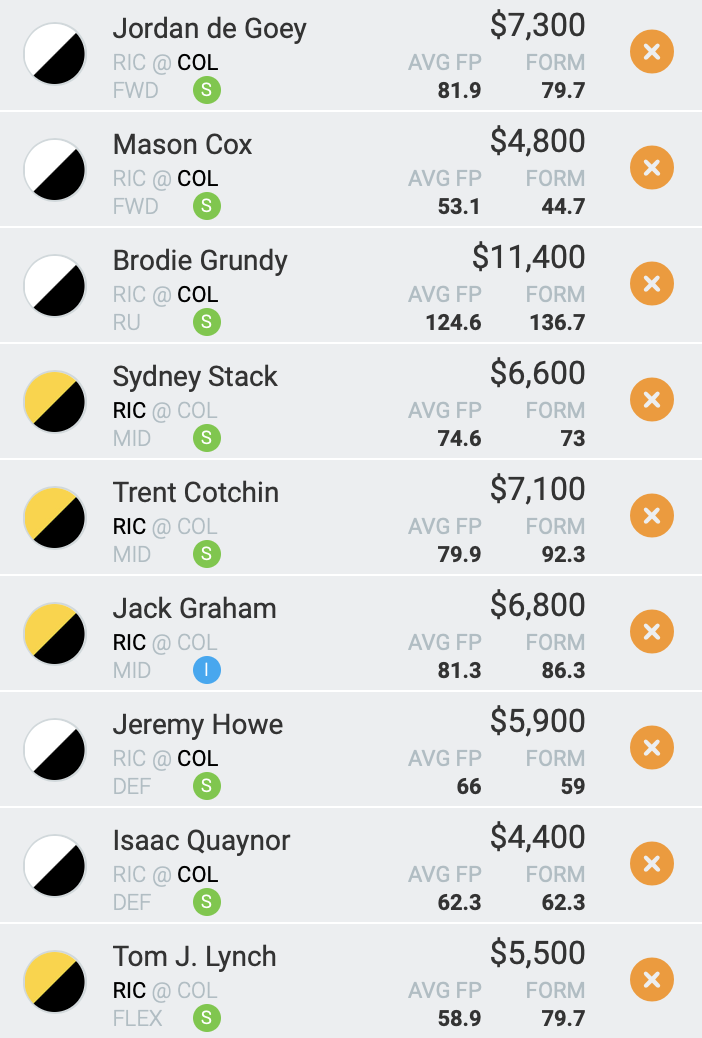