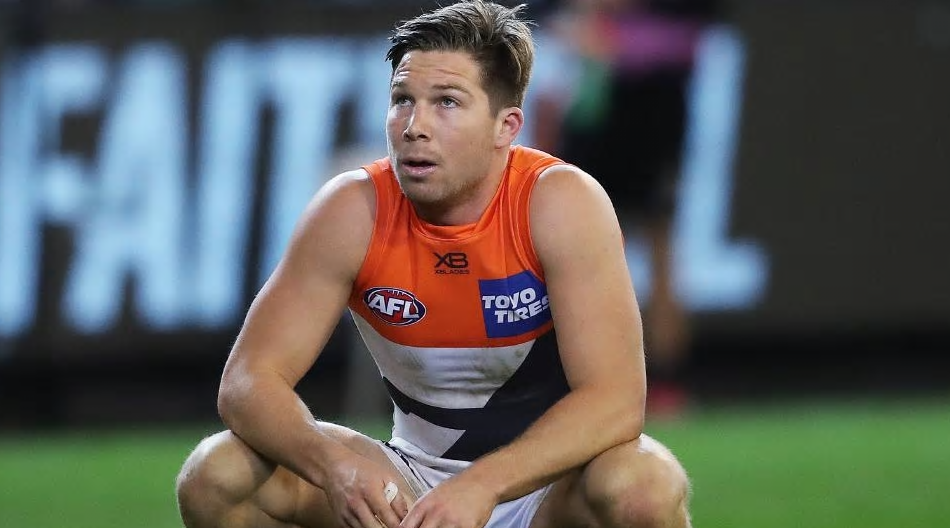 Get on board for another Super Saturday with round 20 bringing a massive 5 games of action. DFS contests continue to be on offer across the major platforms:

Five of the top 8 teams for fantasy points allowed this season are trending much harder to score against over the past 5 rounds. No surprise to see the Tigers turning around their leaky start to the season as they start storming towards finals, giving up just 1,554 points per game over the last 5 weeks. The standout team to target based on recent form on this slate is the Crows who have given up the 6th most points in the league this year, but seen that sky rocket to the second most points over the past 5 rounds, only behind the Gold Coast.

Premium backs will be licking their chops this Saturday with four of the top five teams for points given up to opponents top three scoring backs playing on this slate. Crows stand out as the team to target giving up 90 points per game, however they are playing at home this week. Fremantle are the other team standing out, while the Saints have been stingier over the past five rounds.

Loading up on midfielders against Melbourne is standing out of the best play in the league at the moment. They have given up the third most points in the league to the position this year, but 115 points per game to the top 3 scoring players, which has ballooned over the past 5 weeks to 124 points per game (by far the most in the league during this period).

Look at those recent Giants number. Giving up 115 points per game over the past 5 rounds is 10+ points higher the next best. This slate makes it hard to target with McLean playing ruck for Sydney, however he has shown scope for upside already. Richmond, Geelong and Essendon are three other usual suspects that can be taken advantage on this slate.

I’ve donned the jacket, fired up the green screen and perused the weather forecasts from around the country for this Saturday.

Perth is the most ominous forecast with up to 6mm of rain forecast to hit right around game time. As usual this should help the rucks and the inside midfielders, while not as great for key position players and those who rely on uncontested possessions. Fremantle rucks are hard to play at the moment with Darcy and Sandilands splitting duties. The likes of Nathan Fyfe should excel, while Connor Blakely will be in my absolute no go zone as he plays the wet conditions like he is on an ice skating rink.

Melbourne also has some showers forecast at this point but nothing significant enough to really impact rostering decisions at this stage. As usual, keep a close watch on how the weather patterns develop as we get closer to the first bounce of the slate.

Dylan Clarke has been doing full time run with roles for the Bombers in the midfield. He has typically been going to the number one inside midfielder and on this slate going against Port Adelaide, Travis Boak stands out as an obvious target. Only one player has gone over 100 points against Clarke in the last 8 rounds. 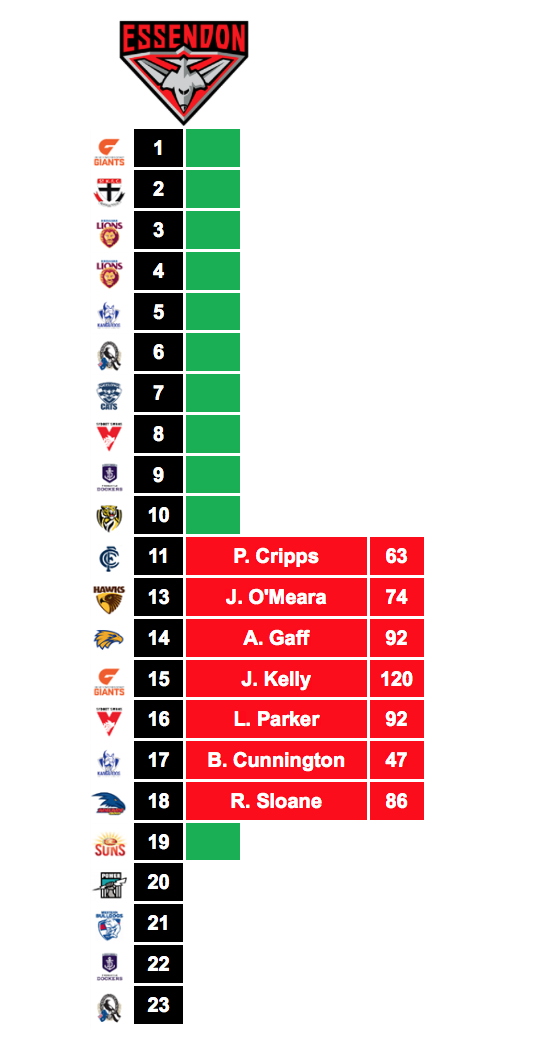 Hayden Mclean (MB $3,500, DS $8,690) is just an absolute lock on Moneyball where he is still the bare minimum price on this slate. He managed just 10 hit outs last round and still returned 53 points. In his first game he obviously had the 87 points, which shows enough of a return at the Draftstars price as well. He is attending 66% of the Swans ruck contests through his two games and on this slate draws what is currently the best matchup in the league for his position with the Giants giving up 115 points per game over the last five rounds to the oppositions number 1 ruckman.

Dalton Langlands (MB $3,500, DS $7,860) was the best value play last Saturday of those around the minimum price range, and while everyone poured into Patrick Wilson on Draftstars we highlighted that you would get Langlands a lower ownership but only slightly more expensive. He remains minimum price on Moneyball despite scoring 75 points last week to back up his 59 points the week before. Despite being away, Adelaide is an elite matchup currently and is certainly required to be in the mix on Moneyball alongside Will Snelling (MB $3,500, DS $7,700) and Mitchell Crowden (MB $3,500, DS $6,020), who are also priced at the bare minimum.

With all these minimum priced options on Moneyball you can practically build any team you like on this slate.

James Rowbottom (MB $5,200, DS $8,840)... my love child. What would a Saturday slate preview be without him. This is purely a Draftstars play, but as I mention week in and week out, last week was his first game in 5 rounds going under 77 points.

Andrew Brayshaw (MB $6,500, DS $11,190) is worth highlighting after back to back 100+ point games and playing significant midfield minutes as the season winds down for Fremantle. Brayshaw has attended 12 centre bounces in each of his last two games and has started reconjur the fantasy scoring potential he exhibited late last year before having his seaosn ended prematurely by Andrew Gaff. This isn’t an easy matchup by any stretch, and possibly the boat has been missed but the Dockers are at home and Brayshaw fits the bill as a wet weather player as he is a great tackler.

Shai Bolton (MB $6,300, DS $10,000)... give me ALL the Shai Bolton on this slate. He continues to go through the midfield with 9 centre bounce attendances in round 19. But the beauty is after two so so performances in the 70 point range his ownership at this price point is likely to decline significantly on a 5 game slate. We can be looking at a player with 115 point upside in his current role at less than 10% owned in one of the top matchups in the league against Melbourne. This is a dream DFS spot to me… in the words of the great Teddy KGB “I bet it all!”.

Toby Green (MB $8,400, DS $14,380) continued his fantasy scoring prowess as a midfielder last week notching up a massive 126 point game against the relatively stingey Port Adelaide in Adelaide. His price is slowly coming but it is still too cheap for the role he is now playing. Since Coniglio went down he has averaged a ridiculous 128.3 fantasy points from three games. Plus you can play him as a forward on both platforms… set and forget.

Matt Crouch (MB $9,100, DS $13,580) is one of those plays I love where a huge ceiling potential has been in a very subpar stretch for a decent period of time. With just a single score over 100 points in the last 5 games there is an opportunity to roster a player with a 130+ point ceiling at lower ownership. On Draftstars his low price will likely garner some attention, but there you are looking at a player who can give you 10x return at the price point. This also looms as a bit of a bounce back game for the Crows who face the Saints in Adelaide after a few down weeks and facing hot media attention. 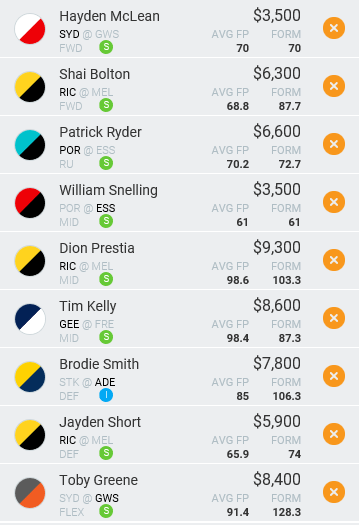