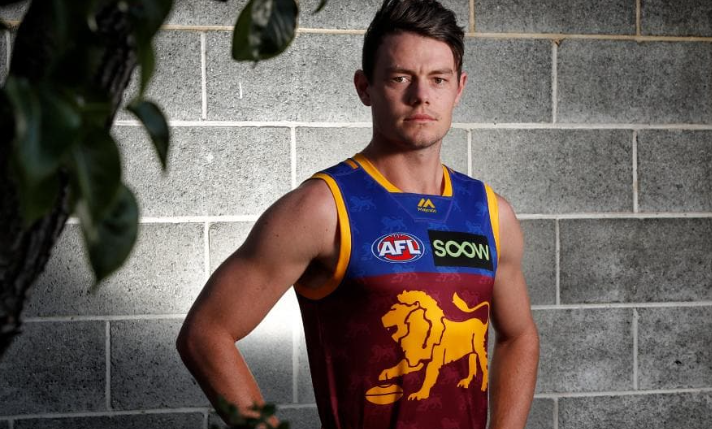 We are heading into the home stretch of the season with our third last Super Saturday slate for 2019. Round 21 brings 5 massive games of action with the major DFS contests on offer across the major platforms including:

Another week another slate with the most obvious target in the league in the Gold Coast. The Suns have conceded the most fantasy points in the league this year by almost 60 points per week to the second highest. This difference has been even more pronounced over the past 5 weeks where they are the only team to have given up more than 1,700 points per game, at a whopping 1,769.

The one team that stands out on this slate when talking about defenders is Collingwood. They have given up the fourth most points in the league this year to the oppositions top three scoring backs, and this number has exploded over the last 5 weeks at 96 points per game.

When we talk teams to target with midfielders it has been Gold Coast all year. They have given up the most points in the position in 2019 and concede an average of 119 points per game to the top 3 scoring opposition players at this position. Melbourne has emerged as a rival to the Suns in this area during the back half of the season giving up 115 points per game to the top three scoring players, and 118 over the last five weeks.

Tim English has been the stand out target this season giving up 102 points per game to opposing number 1 rucks this year. This slate he faces Zac Clarke and Essendon, which is far from a set and forget as Clarke continues to look like possibly the worst player with a regular spot in the best 22 of an AFL team. English himself is in play with the Bombers conceding 93 points per game on the season and 99 points per game over the past 5 weeks.

Brutal winter weather is expected to hit across the country this weekend affecting both Adelaide and Melbourne with significant levels of rain forecast.

Adelaide has already received around 10mm of rain on Thursday and this is not expected to let up over the next two days with similar forecasts for both Friday and Saturday. As a result we can expect wet and slippery conditions for the Saturday afternoon game. This should benefit the ruckman in this game with Ryder and Ladhams splitting the duties for Port Adelaide, and youngster Hayden McLean manning the ship for the Swans. Inside players should also have a field day with the likes of Travis Boak, Josh Kennedy and Tom Rockliff likely to rack up clearances and tackles.

Melbourne and Geelong areas do not look any better than Adelaide on Saturday with thunderstorms forecast through the afternoon. The Demons vs Magpies game is likely to be played in the rain while the Geelong vs North Melbourne contest will be in a wet version of the tip. Geelong’s ground is ruck friendly at the best of times, but throw in a bit of rain and it will be “raining” stoppages… pun intended.

These two are both set and forget plays on Moneyball. Their price differential between the two sites is significant and given their roles in the ruck. McLean has taken an average of 64 ruck contests over the past three games for an average of 76 fantasy points. Ladhams, despite sharing duties with Ryder last week, attending 41 contests and returned 75 fantasy points. Their matchup on this slate is expected to have a significant amount of wet weather as noted above and this should further boost their scoring.

Both are still playable on Draftstars, although their ceiling is limited at the price point on that platform.

Daniel Houston (MB $6,800, DS $12,670) is my play of the day on both platforms. He has seen a significant role shift to playing through the midfield the last two rounds as the Power have chained Robbie Gray back up forward and are still without Ollie Wines. Attending 18 centre bounces per game during this time he has topped the 100 point mark in both games for an average of 113.5 points per game. He has been prolific around the stoppages and always tackled well so the wet conditions should not bother his game style.

Ben Cunnington (MB $7,300, DS $11,460) is my weekly super sneaky play that we will be able to roster at close to 1% ownership. You are probably looking at his scores and scratching your head, however, therein lies the beauty. Cunnington does offer 120+ point upside in the right game and his stoppage based tackling and inside play is suited perfectly to smaller grounds like the tip down at Geelong. His game style also excels in the wet conditions for similar reasons. Look, I wouldn't recommend going all in but as a point of difference he makes a great option.

Taylor Adams (MB $8,600, DS $14,320) remains relatively affordable and on this slate as mentioned above he draws one of the top matchups in the league for his position against the Demons. If the weather hits he should excel as an inside midfielder and he is likely to over looked on a slate full of premium options.

Lachie Neale (MB $9,200, DS $15,060)... it would be remiss not to mention a single Brisbane player on this slate, however realistically I am not telling you anything new to say they are all in play against the Suns. It is the premier matchup in the league for the midfielder with the Suns giving up 119 points per game to the oppositions top three scoring players at the position. Neale is the brownlow favourite and, along with Zorko, is the best midfielder the Lions have on offer. Zorko would also be firmly in the mix, however I give Neale the nod as Dayne is under an injury cloud after leaving the game last week with a tight hamstring. 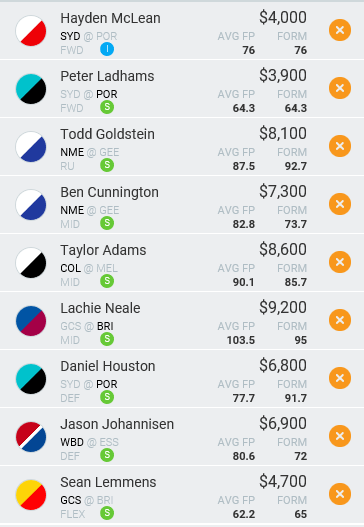