Sunday is back upon us for round 21 bringing 3 games of action. Major DFS contests continue to be on offer across the platforms:

St Kilda and Adelaide have been two of the best teams to target for defender this season giving up the 2nd and 3rd most points to the oppositions top 3 scoring backs this year. St Kilda have tightened this up over the past five weeks giving up just 83 points per game during that period.

Loading up on the Tigers midfielders would have been the obvious play on this slate until recently as the Blues have turned the screws on teams post coaching change. They are due to for a down game, however, and Richmond are in as good a form as any team in the competition at the moment. Adelaide are the next best team to target through the middle, giving up 111 points per game to their opponents top three scorers.

Matthew Kreuzer is back in the ruck for the Blues making them far more difficult to score against than their number suggests. He also draws an elite matchup against Nankervis (who is also returning into the senior side), the Nank has been in the top handful of rucks for points conceded going back to last season.

Josh Kennedy (MB $4,800, DS $8,990) recent form has been scores of 21, 15, 41, 102 and 40 from his last 5 games. All I see there is the 102 he put up against North Melbourne in just three quarters of game time. This isn’t the play you’d want in a head to head, but JK still has the capability to break at slate open at was could be low ownership. The Crows have been getting lit up by forwards over the past 5 weeks as well, conceding 90 points per game to the oppositions top three scorers at the position.

Mitchell Crowden (MB $3,500, DS $6,490) has done just enough to return value in his two games at AFL level this season notching up 57 fantasy points in both contests. He has shown a capability to score at the WAFL level averaging 23.7 possessions 7.9 tackles while playing as a midfielder. He doesn’t get that same opportunity at this level but he should still return in that 50-60 point range while playing as a forward, which on a slate devoid of obvious value plays could be enough for a GPP win.

Dan Hannebery (MB $5,500, DS $11,220) is set and forget play at Moneyball in my opinion, and still viable at Draftstars. While his body continues to let him down, in the two games he has played he looks to moving much better than he was in 2018. He has posted 103 and 82 in his two games from just 68.5% game time. On this slate he draws a positive matchup against Fremantle who have given up the 6th most fantasy points in the league this season.

Matthew Kreuzer (MB $7,600, DS $11,680) is my pick on a slate that is difficult for rucks. Richmond have struggled against ruckman going back to the days when Shaun Grigg was pinch hitting. Toby Nankervis has always leaked points, giving up 99 points per game to the number 1 ruckman in 2018 (the second highest mark in the league for that season). Kreuzer has been up and down this year, but still displayed 120 point upside.

Luke Shuey (MB $9,200, DS $14,840) is my sneaky premium play on this slate. With big names everywhere I expect him to go under owned on a slate where he has one of the league's best matchups. The Crows typically do not tag, and have given up the 4th most points in the league to the opponents top 3 scoring midfielders this year. Furthermore, Shuey has historically loved playing Adelaide averaging 109 points from their last 5 meetings (including 112+ in each of their last 4 games). 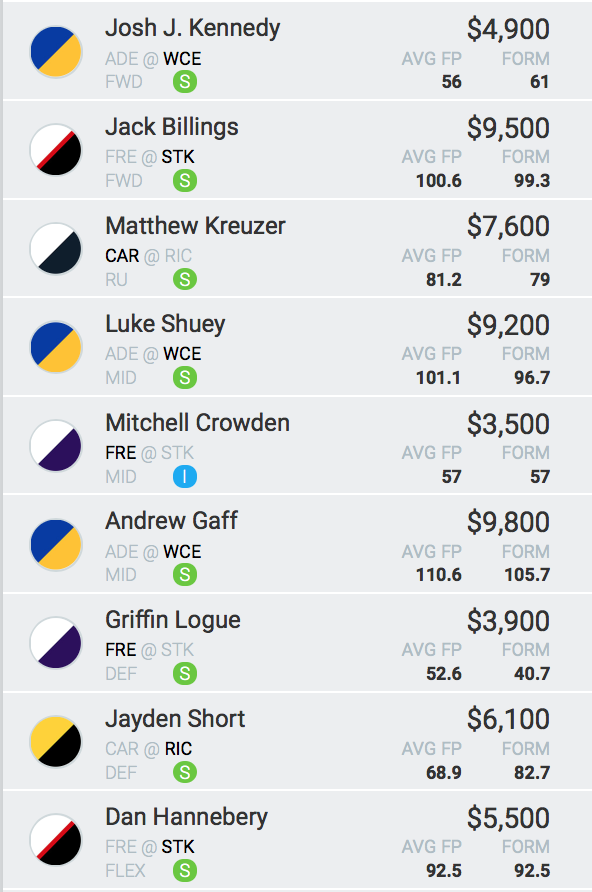