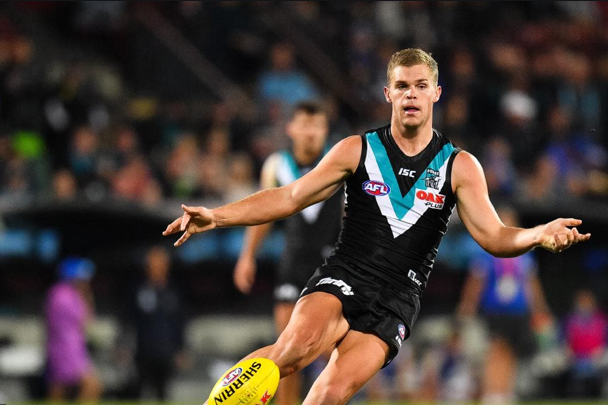 The second last round of the year is here and there is another monster 5 game slate for Round 22. The major DFS contests on offer across the major platforms include:

This is a tricky slate for identifying obvious teams to target. There is no line greater than 10 points and while Carlton have given up the second most fantasy points in the league this year they have been one of the stingiest teams in the competition since David Teague took over.

Playing backs against St Kilda has been a consistent play all season. They have conceded 89 points per game to the oppositions top 3 scoring defenders, which is the second most in the league opening the door for rostering Carlton half backs who have been racking up uncontested possessions in recent weeks.

The Magpies stand out as a team to target recently, giving up 88 points per game on the season, and 92 over the past five weeks, which is the highest in the league during that period of time.

While Carlton have been harder to score against in recent weeks they have still been a strong target for top line midfielders. Giving up 114 points per game on the season to the top three scoring centres (equal second highest in the league), this has only dropped to 112 points per game over the past three weeks.

Ruck is not clear cut on this slate. Carlton are a solid choice as they have given up the second most points in the league this year to the position, however I have to note that they have been much harder to score against when Kreuzer is playing. Essendon would be the clear stand out target on most slate, giving up 93 points per game on the season and 105 per game over the last 5 weeks (most in the league), however they are facing Fremantle who are splitting ruck duties between Sandilands and Darcy.

At this stage the weather looks clear across the country for football on Saturday. Perth looms as the greatest risk with 10-15mm forecast on Friday, however it is expected to back right off to nothing come Saturday. As always monitor conditions right up until lineup lock as weather changes can strike at any time.

Jack Steele was built to matchup against big bodied midfielders in the mold of Patrick Cripps. Cripps has been incredibly hit and miss over the back end of the season with several sub 100 point performances mixed in with the odd 120+ monster (including a 141 and 126 from his last three games). As a result he is priced attractively on both platforms, however I would expect Steele to put significant work into him at the stoppages and when these teams met earlier in the season Cripps managed just 88 fantasy points. 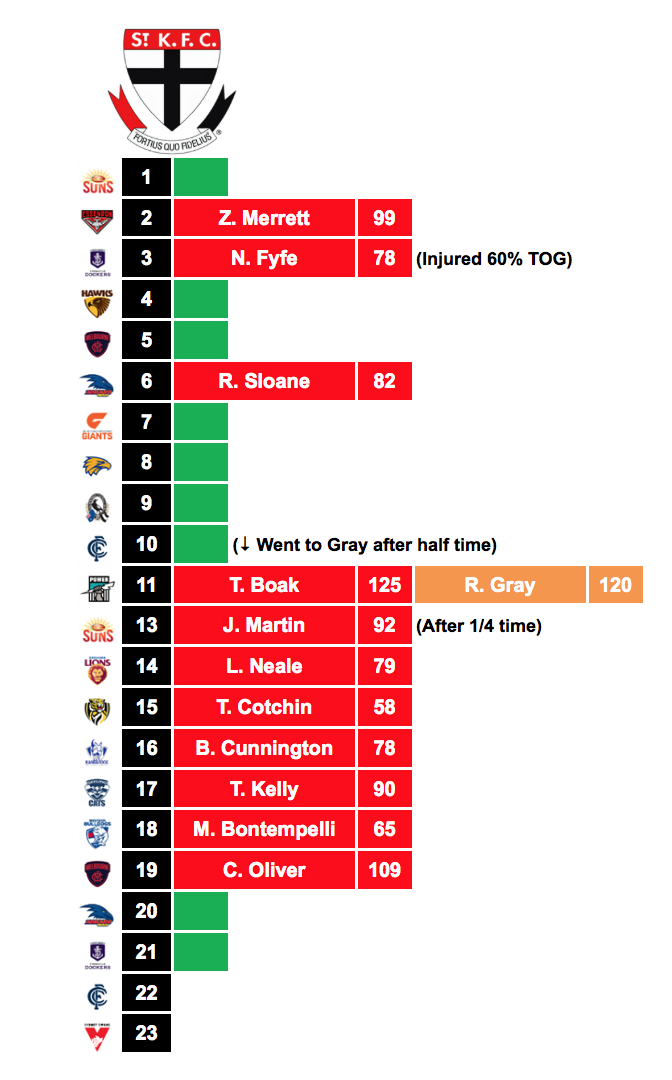 Peter Ladhams (MB $4,400, DS $10,060) on Moneyball is a set and forget play against this week. He attended 46 of the 94 ruck contests last week for Port Adelaide and returned a monster 100 fantasy points racking up ridiculous 23 possessions. From his last two weeks since returning into the team he has averaged 89 fantasy points making him a no brainer play at the Moneyball price. On Draftstars I would tend to pass at this price point, however last week showed he has the ceiling to still help you win a GPP.

Quinten Narkle (MB $3,700, DS $7,730) had been spending time in the midfield at VFL level posting 20+ possessions in his last 5 games before being called up last week. He attended 4 out of the teams total 14 centre bounces last week and spent plenty of time around the ball while racking up a huge value return of 93 fantasy points. This game won’t be nearly as easy going against Brisbane at the Gabba who are one of the stingiest teams in the league, however, you don’t need another score of 93 points to return value, particularly on Moneyball where he is close to minimum price.

Ed Langdon (MB $7,700, DS $12,420)... let me just say there will be plenty of Fremantle stacks this week and I will own a number of them. Ed Langdon has finally started finding the football again over the past two rounds posting a 112 and 105. Essendon are the laughing stock of the league right now after being belted by 100+ points to the Western Bulldogs last week and now have to fly to Perth to face an in form Fremantle. Langdon has averaged +7.8 fantasy points at home over his last 24 games there and despite back to back tons, his price has yet to bounce back.

Dan Hannebery (MB $6,100, DS $10,660) will be popular again this week after posting a whopping 117 points last round. Remarkable his price dropped on Draftstars. He is too cheap on both platforms for player that has two scores of 100+ from three games this season, and a low score of 82. That said, despite the fact he now looks to be moving more like his old self rather than his last season at Sydney, I didn't recommend him last week as he is only playing around the 69%. So… while he projects as a great play value wise, there is some game theory to fade a player likely to be one of the top owned on the slate. His playing time is unlikely to increase significantly this year and he only attended 5 center bounces from a possible 23 last round.

Dan Houston (MB $7,300, DS $11,610) is my lock and load of the day. He has topped the 100 point mark in each of his last three games while playing through the midfield. Ollie Wines had no impact on his role as Houston attending 21 from a possible 25 centre bounces against Sydney (while it was Travis Boak who moved forward). On this slate Houston draws North Melbourne who have given up 110 points per game to their opponents top 3 scoring midfielders this year, which is the 4th highest mark in the league.

Rowan Marshall (MB $9,000, DS $13,250)... ruck is brutal on this slate as noted above. Marshall stands out to me as the safest play, particularly at his price on Draftstars. Although not necessarily with Kreuzer in the lineup, Carlton have given up the second most points in the league to number one ruckman this year and Marshall has proven to be almost matchup proof posting 7 games of 100 or better from his last 9.

Matt Crouch (MB $9,500, DS $14,960) has reengaged supreme pig mode these last two weeks posting 126 and 151 fantasy points. On this slate he is matched up against Collingwood who have given up 112 points per to the top three scoring opposition midfielders over the last five weeks, which is the 3rd highest amount during this time period. He averages +2.3 fantasy points per game at home over his last 46 games played at Adelaide Oval. 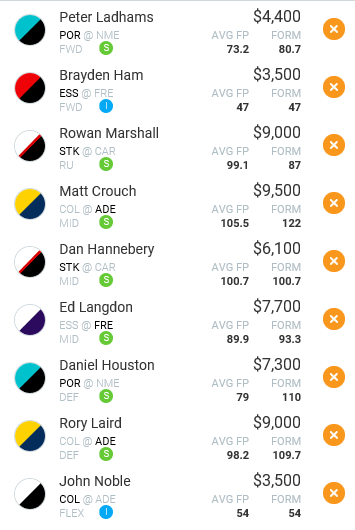