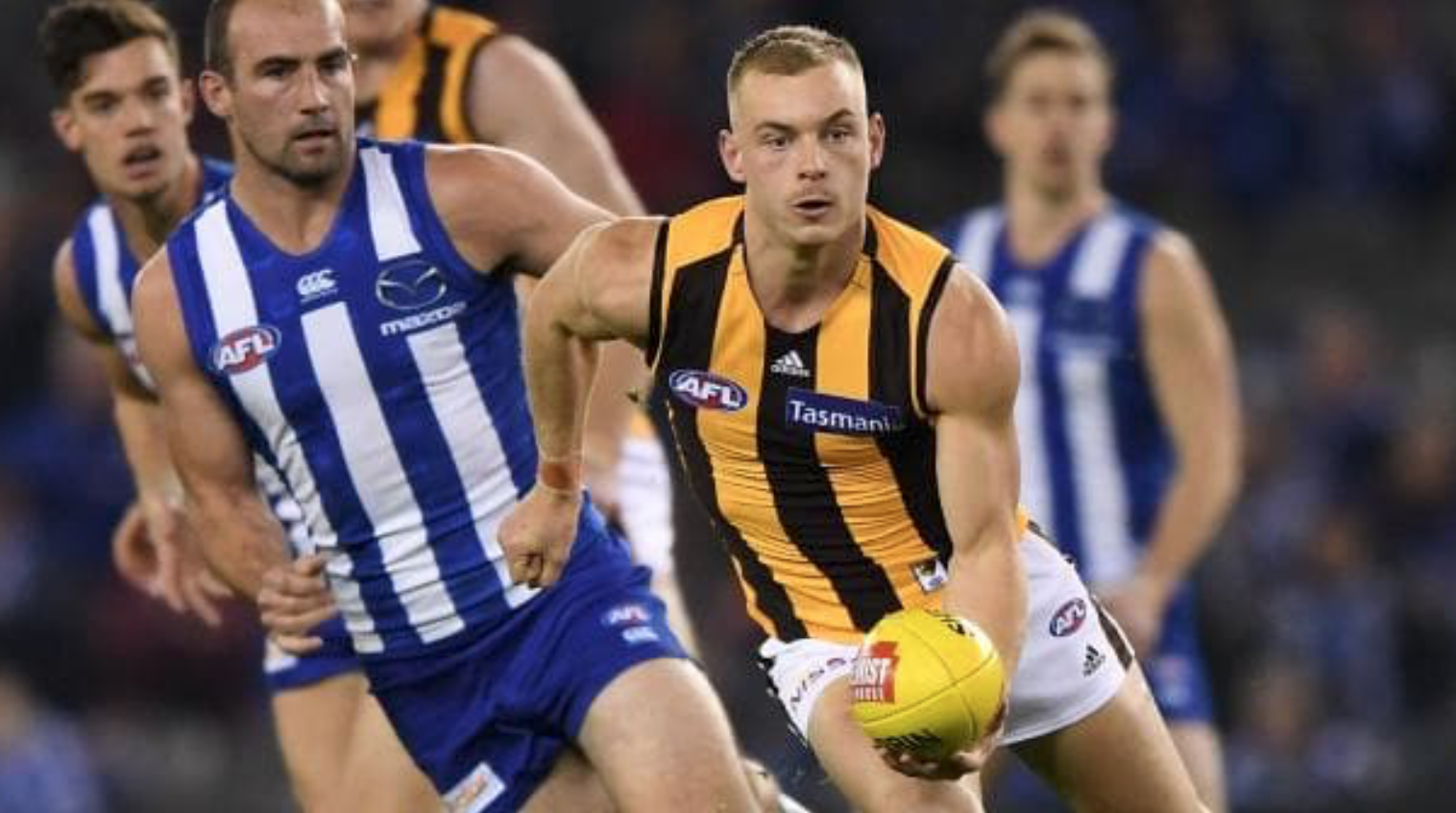 Sunday is back upon us for round 22 bringing 3 games of action for the second last time this season. Major DFS contests continue to be on offer across the platforms:

Another round… another slate of targeting the Gold Coast. This week it is Hawthorn who host the team conceding the most points in 2019 and are 47 point favourites. The Suns have been getting demolished over the last five weeks conceding a ridiculous 1,786 points per game (more than 130 points per game more than the closest team during that same stretch). The other team worth highlighting are the GWS Giants who have been the hardest team to score against this season, however, with their recent injury troubles they have conceded the third most fantasy points over the last five weeks.

The Gold Coast have been the stand out team to attack through the midfield for going on two seasons now. They have conceded a massive 120 points per game to their opponents top 3 scoring mids in 2019, which is 6 points per game better than the next closest team.

Three of the top four teams to target in the ruck are on this slate, however there is probably a simple decision with Shane Mumford sole rucking this week against Tim English. English have given up the most points in the league at 100 per game to the oppositions number 1 ruckman.

The destroyer of fantasy worlds is back this week as Matt de Boer returns from injury for the GWS Giants. De Boer was the most feared tagger in the league before being injured against Richmond. You can see the level of disruption he was caused on our tagger tool below, conceding just one score above 80 fantasy points this season. With the Western Bulldogs as their opponent this week I would expect him to go to either Marcus Bontempelli or Jackson Macrae… play them at your own risk! 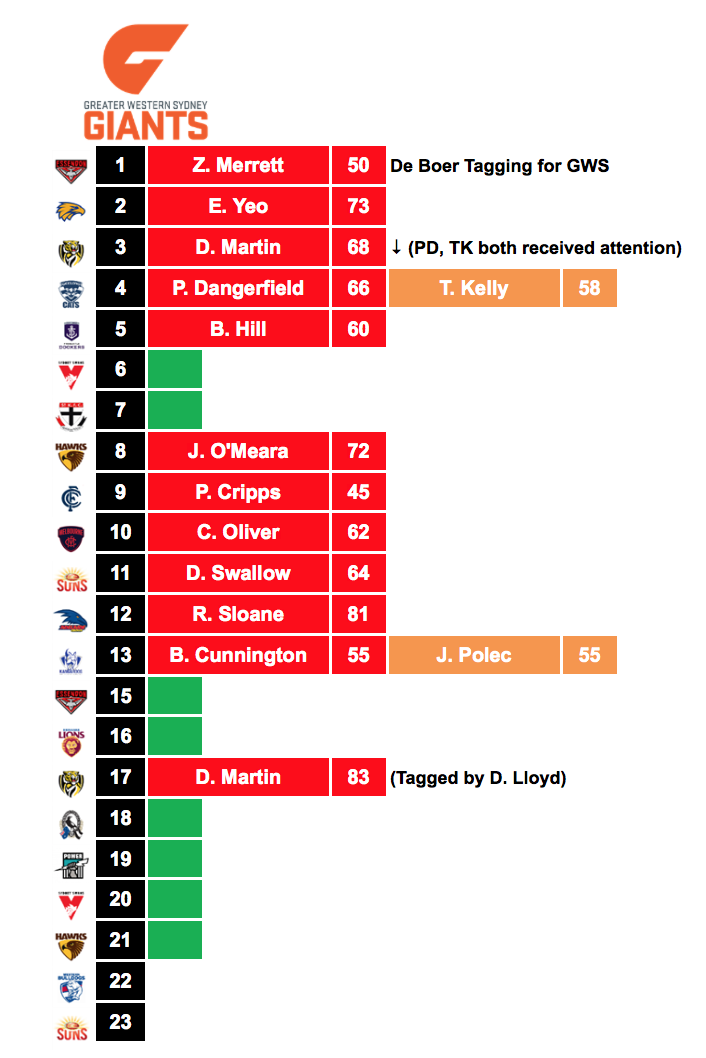 Zach Sproule (MB $3,500, DS $5,000) comes in to replace the injured coleman leader in Jeremy Cameron. Sproule has a massive tank and should get up the ground at times during the game. At NEAFL level he has averaged 13 possessions, just under 6 marks and 2.3 goals in 11 games this year. This is a slate really devoid of value so the a 50 should be more than sufficient on this slate. In Sproule’s favour is the matchup against the Western Bulldogs who have consistently been one of the easiest teams to score against for key forwards these past two seasons (conceding the 5th most points to the position in 2019).

Jiath Changkuoth (MB $4,000, DS $5,000) is rebounding half back playing his second game for the season. In his first contest last week he managed just 39 fantasy points, but once again on a slate with little obvious value he is worth considering again. His ownership should be reasonably low on a three game slate after that performance and he draws an elite matchup in the Gold Coast Suns. Jiath has averaged 63 points per game in the VFL this season.

Chad Wingard (MB $6,800, DS $11,350) has solidified his spot in the midfield for the Hawks as the season went on. Last week he cracked the 100 point mark for the first time this season and led the team in center bounce attendances with 18. As noted above this week he has the best matchup in the league for his position against the Gold Coast Suns. Wingard is sure to be a popular play on this slate and he is still only receiving around 69% game time, so the option to fade in GPPs is there.

Jack Bowes (MB $5,800, DS $10,190) has now played two games since returning from injury and he looked to be back in his early season form posting 98 fantasy points from 21 possessions. On this slate he draws the best matchup in the league for half backs against Hawthorn who have conceded 91 points per game to the top 3 scoring defenders this year.

Shane Mumford (MB $5,500, DS $8,260) is a set and forget play at his price on Draftstars. On Moneyball it isn’t as automatic but with the top matchup in the league for his position and now rucking without Dawson Simpson in the team he is number one ruck play on the board. Mumford has averaged 89.5 fantasy points in games where he has had 40+ hit outs this season, and Tim English and the Western Bulldogs have conceded the most hit outs in the league in 2019 at 48.8 per game. Lock, load and move on.

James Worpel (MB $9,100, DS $14,410) has been an absolute monster this season and he is closing out 2019 with a bang. He has posted an average of 107 points from his last 7 games, including three straight games of 106+. As mentioned throughout this article he draws the best matchup in the league for his position against the Gold Coast, and should avoid the attention of Touky Miller who is likely to go Jaeger. Worpel averages 102 points per game at Marvel Stadium. 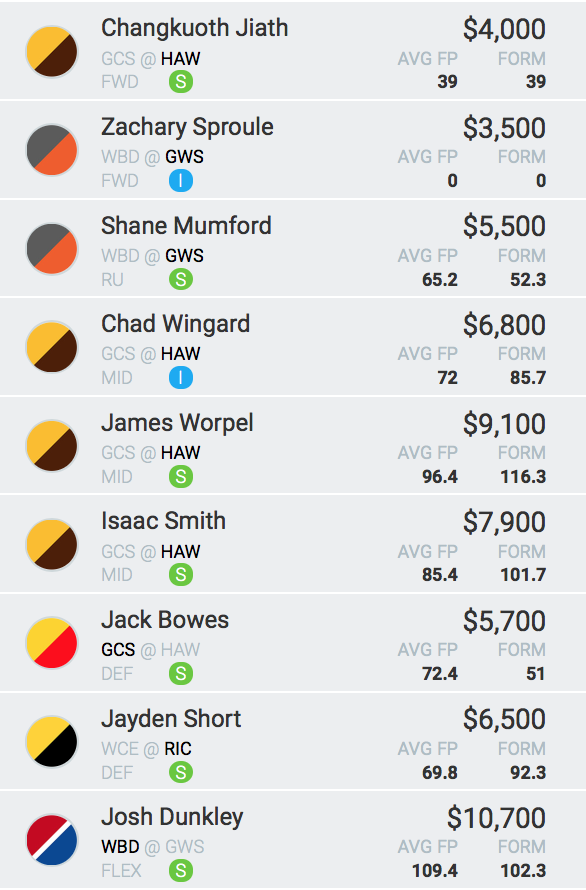