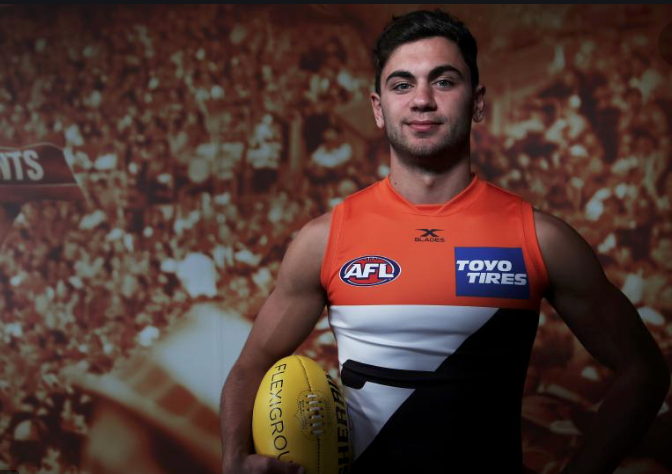 The final round of the year is here and as a result this will be our last super Saturday slate with 5 games to play. The major DFS contests on offer across the major platforms include:

Feels like we have hit 23 weeks of the same message this season, and to be fair, one that was not dissimilar to last year… target Gold Coast! The Suns have given up the most fantasy points in the league by almost 70 points per game to the next highest team, and conceded a massive 1,722 points per game over the last 5 rounds. Carlton have also been a team to target this year conceding the second most points, although as mentioned in past weeks they have been far stingy since Brendan Bolton was fired.

My favourite positional play of the season has been backs against the Hawks. It was on full display last week with Pearce Hanley, Jarrod Harbrow and Lachie Weller all going bonkers for the Suns despite the Hawks winning comfortably. They have given up a massive 92 points per game to the oppositions top 3 scoring defenders in 2019.

Midfielders against the Gold Coast is number one on the rostering agenda as usual with the Suns conceding 119 points per game to their opponents top 3 scoring players at the position. This should make GWS stacks of their big three in Josh Kelly, Tim Taranto and Lachie Whitfield extremely popular and rightfully so. The alternative will be Geelong midfielders down at “the tip”. The Cats are 30 point favourites against the Blues down on their home ground and Carlton have given up 114 points per game to their opponents top 3 scoring midfielders, the second highest mark in the league this year.

Carlton have given up the most points on the slate to opposition number 1 rucks this year, however with Kreuzer playing this number is significantly lower. In fact it is their opponent, Geelong, who looks to be an appealing target. The Cats have conceded 93 points per game to opposing rucks this year, which is the 5th highest in the league. The other two options that stand out to target are GWS, who have given up 94 points per game (and a whopping 103 points per game over the last 5 games), and the Sydney Swans, who will be once against rucking with Aliir Aliir and Sam Reid.

Games are being held everywhere across Australia this Saturday but Melbourne itself. There are two weather alerts to keep an eye on:

Hobart is expecting both showers in the afternoon around game time and strong winds that will impact Blundstone Arena. This should play right into North Melbourne’s hands as they are used to the contested football the weather conditions bring to this location. Inside players such as Ben Cunnington and Jack Ziebell will be at home.

Possibly not enough wet weather to really impact the conditions in Geelong on Saturday, however it is certainly worth monitoring. GMHBA is a ground that suits ruckman at the best of times and a bit of raing should emphasise this even more, while inside midfielders will also revel in the conditions should it be slippery.

Beware of the Sydney vs St Kilda matchup as taggers will be lurking on both sides of the ball looking to kill your dreams of fantasy glory. Jack Steele has been causing major issues for inside ball winners all year, holding 7 of his last 8 opponents to under 100 fantasy points. I’d expect him to lineup on Josh Kennedy or Luke Parker in this matchup. While for Sydney it has been George Hewitt who has been doing selective roles to the opponents damaging midfielders, with Billings a likely target. 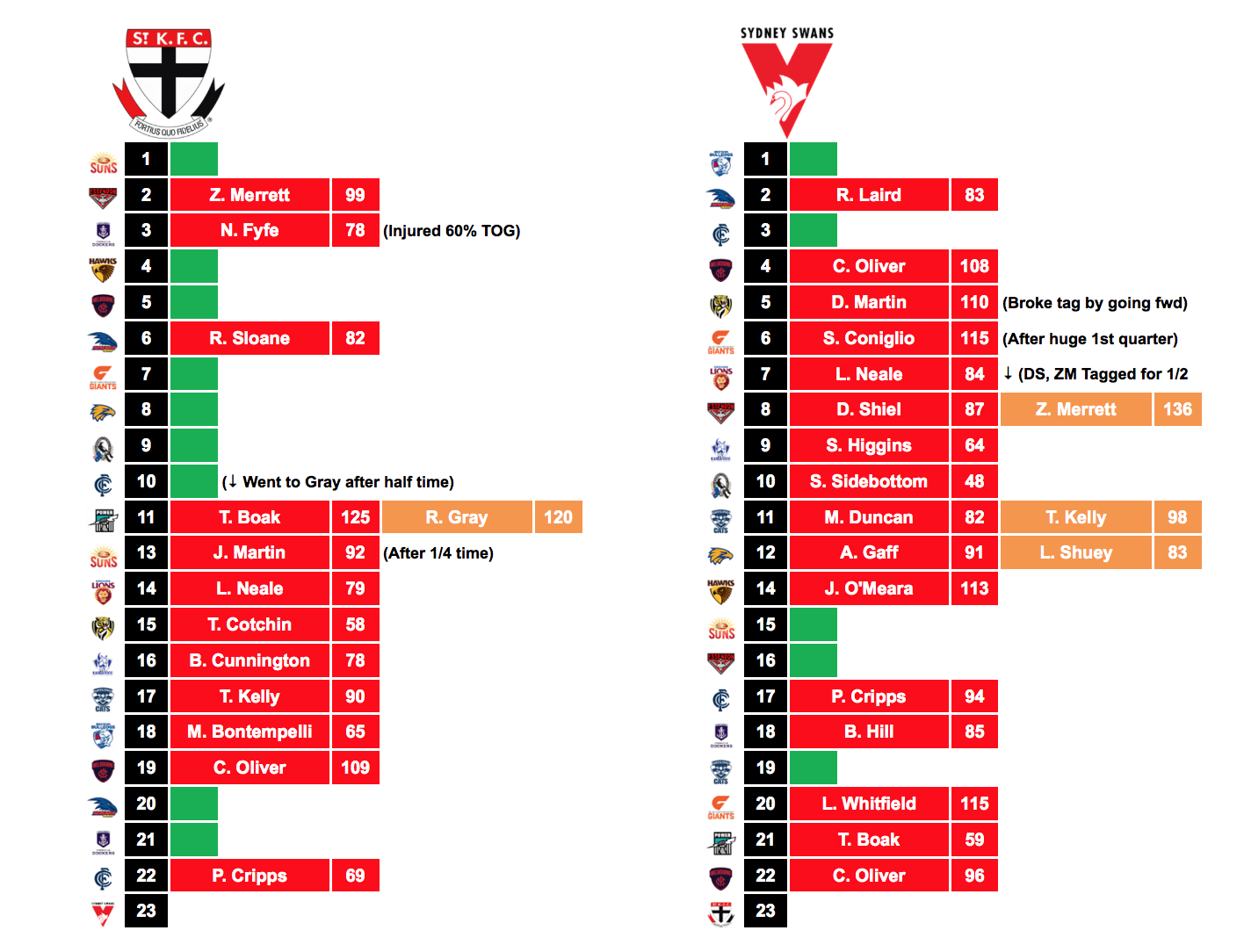 Nick Blakey (MB $4,900, DS $7,850) has been pushed much further up the ground in recent weeks to better use his immense running capacity. Playing a very high half forward flank role / wingman has seen his possession numbers and fantasy scores increase, racking up 17.5 possessions per game and 75 fantasy points from his last two matches. On a slate where no obvious value stands out, identifying these positional changes will be the key to finding that GPP winning return from players in the value price range.

Quinton Narkle (MB $3,700, DS $7,630) … as mentioned last week had been spending time in the midfield at VFL level posting 20+ possessions in his last 5 games before being called up in round 21. In his first game for the Cats this year at GMHBA Stadium he attended 4 out of the teams total 14 centre bounces (mostly late in the game, which was a blowout) and spent plenty of time around the ball while racking up a huge value return of 93 fantasy points. This continued last week against Brisbane, attending 7 centre bounces, however he wasn't able to produce a similar fantasy return in a tougher matchup. This week he has an elite matchup at home again verse Carlton who have been one of the easiest teams to score against all season, particularly in the midfield. His ownership could dip after a poor performance last week, making him an elite play on this slate.

Oliver Florent (MB $6,400, DS $11,730) is another Swan who has been given more responsibility as the season winds down. He has clearly been earmarked as the future of Sydney’s midfield and over the last two games he has been unleashed with 17 and 14 centre bounce attendances respectively. His fantasy scoring has flourished under this new role posting an average of 105.5 fantasy points from these two games. There is no reason to believe this role won’t continue in the last round of the season with the Swans totally out of the finals hunt.

Chad Wingard (MB $7,300, DS $11,440) is a player we have been touting on here for weeks due to the increased role through the midfield. It was only a matter of time before the fantasy scores followed going over 100 points in each of the last two rounds, while leading the Hawks midfield in centre bounce attendances. His price has yet to adjust for this role and increased output, making him a no brainer player on this slate and I would expect to be one of the highest players.

Jeremy Cameron (MB $7,600, DS $11,630) returns from injury that has all but cost him the Coleman medal this season. Notice the key term there, “all...but”. While he brings some risk of not being fully fit, he draws the top matchup in the league for forwards in the Gold Coast Suns and the Giants are 46 point favourites. In this matchup earlier in the year Cameron posted 110 fantasy points while kicking 5 goals. For a little added juice there is the incentive to catch Ben Brown in the Coleman race, so you can expect if this game blows out as expected all the Giants players will be looking for Cameron at every opportunity.

Shannon Hurn (MB $7,800, DS $12,390) has the top matchup in the league at his position against the Hawks this round. As mentioned above they have given up over 90 points per game to their opponents top 3 scoring defenders. Hurn brings GPP winning upside at this price point and in addition would make a nice correlated play with other Eagles backs such as Brad Shepard or Jeremy McGovern.

Tim Taranto (MB $10,100, DS $15,770) you can play a slate with Gold Coast on the card and not have exposure to their opponents midfield. A popular play will be to stack the big three as noted above, but I was to select just one Taranto is the clubhouse leader. With just one game under 109 fantasy points from his last 6, his resume speaks for itself. However, it should also be noted that Josh Kelly is still returning from injury and faces the prospect of attention from Touk Miller, while Lachie Whitfield was tagged last time the Giants played the Suns. This leaves me to suggest Taranto as the safest play of the three. 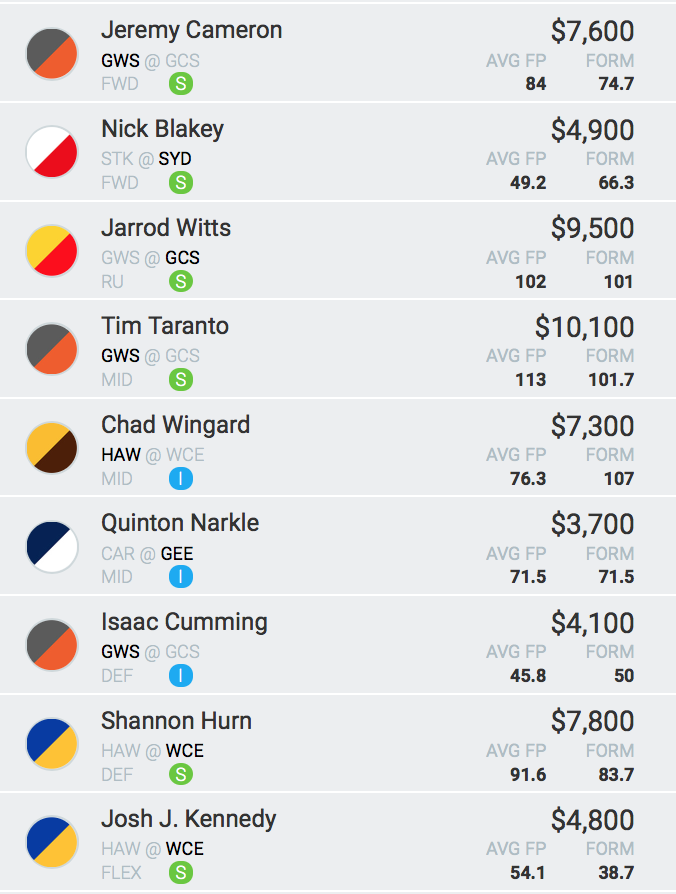