This Thursday night we make our way to the Gabba as the upstart Brisbane Lions face another huge test against 2018 grand finalists Collingwood. The typical Thursday night tournaments are on offer across the platforms:

Brisbane and Collingwood have been two of the toughest teams to score against so far this season with the Magpies giving up the fewest points in the league and Lions the third lowest.

Both teams have been exceptionally stingy through the midfield overall, particularly the Magpies who have held opposition midfielders to just 77 points per game which is the lowest mark in the league. Brisbane have been somewhat vulnerable to the oppositions top three scoring players conceding 107 points per player, which is around league average through four rounds.

Likewise up forward the oppositions top scorers have done damage against Brisbane this year. The Lions have conceded 81 points per game to the top three scoring forwards the fourth highest mark this season.

It does not look like the best slate to pay up for Grundy, as the Lions have been the toughest team to score against in the ruck this season. They have held opposition number 1 rucks to a ridiculously low 47 points per game. Note that this is impacted by playing both West Coast and Port Adelaide already this season, who split time significantly between two ruckman. That said, they also held Todd Goldstein to 68 points and Tom Bellchambers to a miserable 31.

There is no stand out in this matchup with Collingwood favourite by less than two goals. Gabba can be a notoriously hard ground to score at and both teams have been stingy this season. However it is never a bad idea to stack Collingwood whose game style is predicated around controlling the ball. In their matchup at the Gabba last season the Magpies notched up a massive 7 tonnes in a 7 point win. 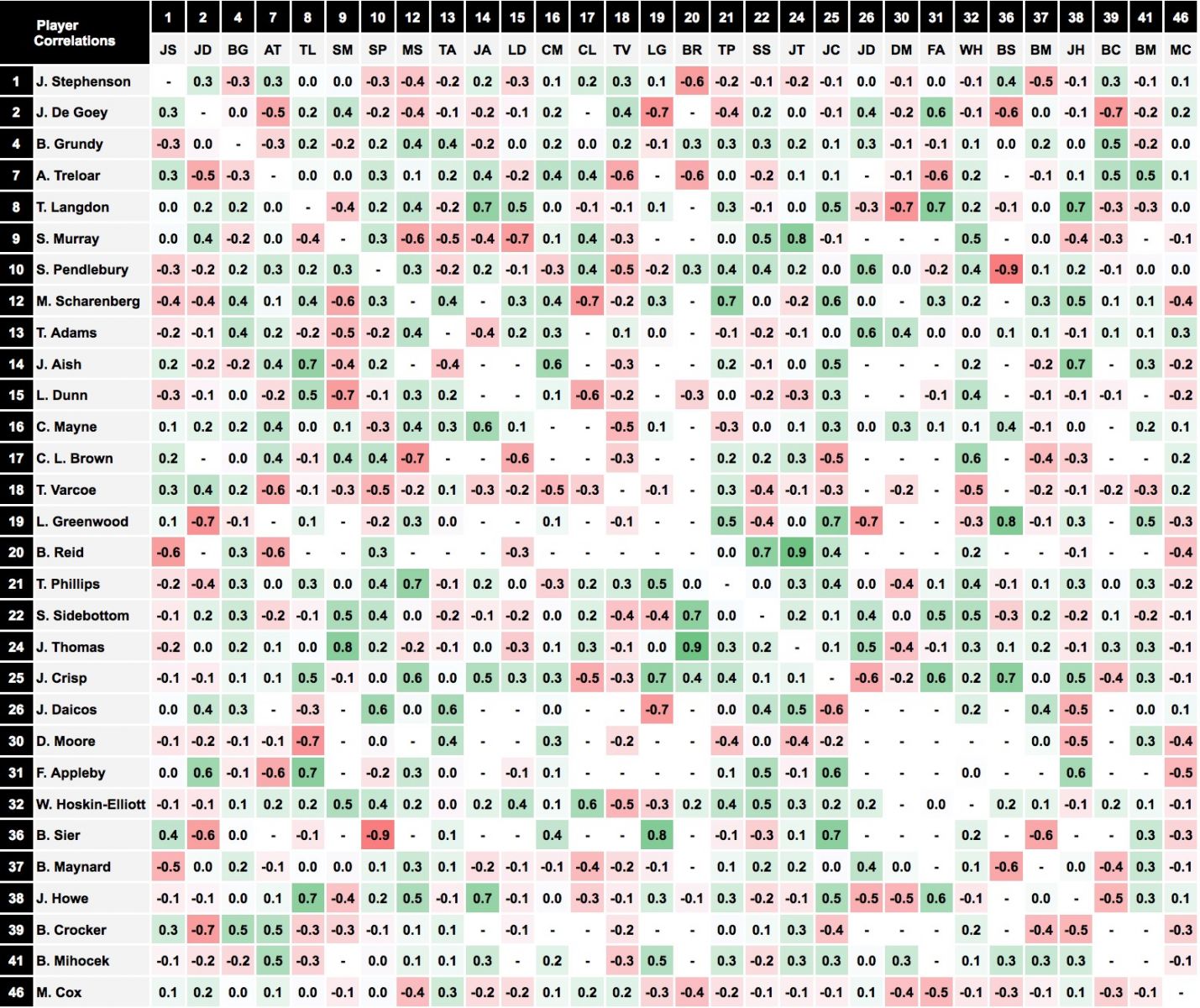 Given the Lions susceptibility to conceding points to the oppositions best forwards Jordan De Goey makes for a good starting point for Collingwood stacks. He does not appear to generally rely on players in the midfield for his points, largely holding negative correlations with some of the Magpies top mids. He does correlate nicely with other forwards, however, so pairing him with either Jaidyn Stephenson (+0.3 correlation) or Travis Varcoe (+0.4 correlation) would make for nice plays.

Oscar McInerney (DS $7,850, MB $4,700) has had a great start to the season, particularly over the last three games where he has averaged 64 points including a season high of 80 points. He has taken around a third of the ruck contests for Brisbane this year and has averaged 15 hit outs. This gives him a safe floor as a value play that will be much needed on this single game slate.

Darcy Moore (DS $8,110, MB $4,600) … another single game slate another value play of Darcy Moore. As I said last week he has been safe as houses so far this year posting 60+ in each of his last three games. He has yet to flash any major upside, however his scores are trending upwards and playing in the Collingwood backline always means you have a chance to get involved in several chains of play as they possess the football.

Jordan De Goey (DS $10,980, MB $7,500) is my favourite play on this slate. As mentioned above the one area that Lions have been susceptible to this season has been the opposition's top forwards. This is a trend that continues from 2018 and was highlighted in their matchup with the Magpies in round 7 where De Goey made the Gabbas his own kicking 5 goals 2 points en route to 113 fantasy points.

Taylor Adams (DS $15,740, MB $9,300) had well and truly blown out the cobwebs last week notching 116 fantasy points against the Western Bulldogs. Brisbane have conceded most of their midfield points to inside players this season and in addition Adams is unlikely to garner any attention that might come in the form of Mitch Robinson.

Monitor the teams for inclusion of tagger, particularly on the Collingwood side. If Levi Greenwood is in it might be wise to fade either Dayne Zorko or Lachie Neale whose explosive start to the year is screaming for a game where he gets a player in his pocket.