Good Friday gives us two games that have been broken into two single game tournaments. The first game of the day is in the afternoon where we make our way to Marvel Stadium to see North Melbourne host Essendon. The major tournaments for this single game include:

The last time these two teams met was round 15 last year and it was an absolute shoot out with the Bombers winning 125-108. As a result there were plenty of fantasy points to go around. This year North Melbourne have given up the 6th most points to opponents, while Essendon have continued to be somewhat difficult to score against giving up the 11th most (despite losing 3 games).

North Melbourne have had significant scores across their back line this year as they have over possessed the ball through that region of the ground. This does not look like the slate to play the Kangaroos backs, however, as Essendon have given up the fewest points in the league to the position this year.

It has been up forward where North Melbourne have been vulnerable conceding the third most points in the league through four rounds.

Essendon will be the team I look to stack on this single game slate. While they are only 8.5 point favourites they have found their form over the past two weeks and are now looking more like the team that closed out the season last year. 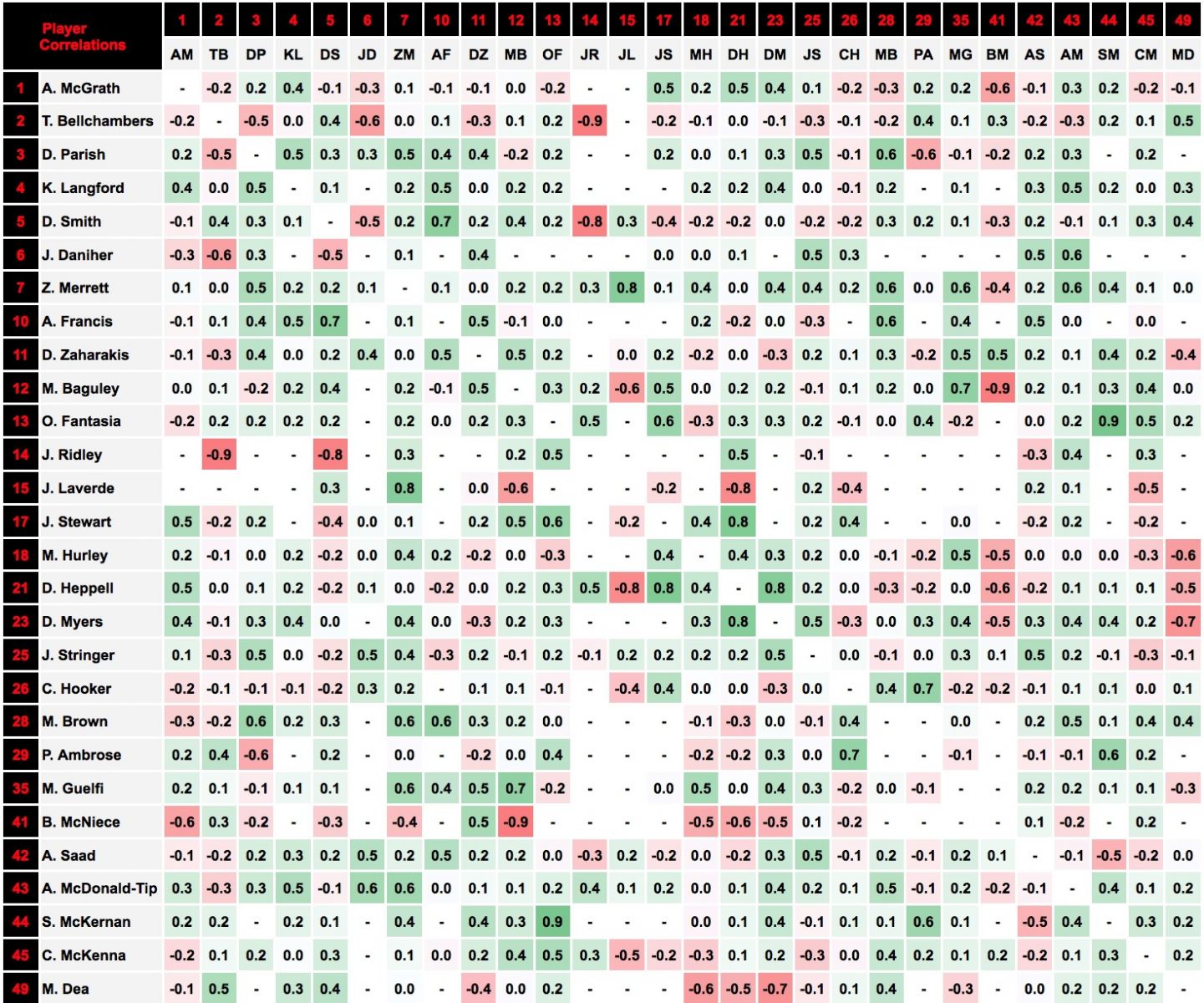 If you are going to start your Essendon stack with Zach Merrett there are plenty of options that correlate well. Darcy Parish has a massive +0.5 correlation with Merrett and has found form over the past two weeks as the Bombers play as a team has improved. Merrett also links well with the holding a +0.4 correlation with Michael Hurley.

Zac Clarke (DS $5,500, MB $6,000) is a great avenue to save money on Draftstars and spend up at other positions on this slate. Tom Bellchambers is downright unplayable at the moment and Todd Goldstein looks to be getting a little long in the tooth averaging just 81 points this year. Clarke won’t blow the doors off but he has been contesting around 43% of the ruck contests since he entered the team two rounds ago. He should be safe for 40+ points, which could be enough on this slate, and he also brings the opportunity of snagging a few goals and going for well over the 10x mark.

Jordan Ridley (DS $8,320, MB $4,600) is another safe value option in this matchup. He notched up 76 points in his recent game and looks to have a floor of around the 60 point mark. Playing in the backline also makes him a solid option for Essendon stacks.

Orazio Fantasia (DS $10,190, MB $6,900) has already shown he can deliver up to 10x his value this season topping the 100 point mark two weeks ago. He has the ideal matchup on this slate as noted above with North Melbourne conceding the third most points in the league to forwards. There isn't a better ground to play Fantasia on either, he has averaged 88.8 fantasy points at Marvel from his last five games at the ground, with tonnes in each of his last 3.

Ben Cunnington (DS $12,790, MB $8,200) is my sneaky GPP play on this slate. At this price he brings a over 10x upside, which is huge and something that can’t be said for most of the premium priced players on this slate. He is far from safe with a very low floor for a midfielder, however as a result he will go under owned and was the top scorer for North Melbourne last season against Essendon with 108 points.

Dyson Heppell (DS $14,820, MB $9,000) is another great pivot option on this slate as everyone will flock to Zach Merrett after his big game last week. But Heppell is cheaper despite averaging more points than Merrett this season and has been significantly lower owned on each slate.