In the second half of the Good Friday double header we head west where the reigning premiers West Coast will host Port Adelaide at Optus Stadium. The major Friday night tournaments on offer across the platforms include:

Port Adelaide have continued on from 2018 where they gave up the fewest fantasy points in the league to once again be stingy this season conceding just 1,447 points per game, which is the second lowest mark. West Coast have also been notoriously hard to score against.

There really isn't any positions that stand out as avenues to attack with these two teams, however there are obvious positions to avoid. Unsurprisingly forwards have struggled against West Coast, who possess arguably the best backline in the league.

Meanwhile Port Adelaide have been able to restrict opposition midfielders, giving up just 80 points per player through four rounds, which is the second lowest mark in the league.

West Coast at home are favoured by just under five goals in this matchup. This makes them stand out as the obvious team to stack on this slate. However, before we just totally rush in, there is a weather alert for this game:

With up to 25mm of rain forecast, and morning thunderstorms on game day it is possible that this game is played in wet and slippery conditions. Such conditions can really disrupt West Coast possession game style, as we saw in round 1 where they lost to the Lions on a very dewy and slippery night. So maybe temper your games tacks to avoid less of the pack marking players. 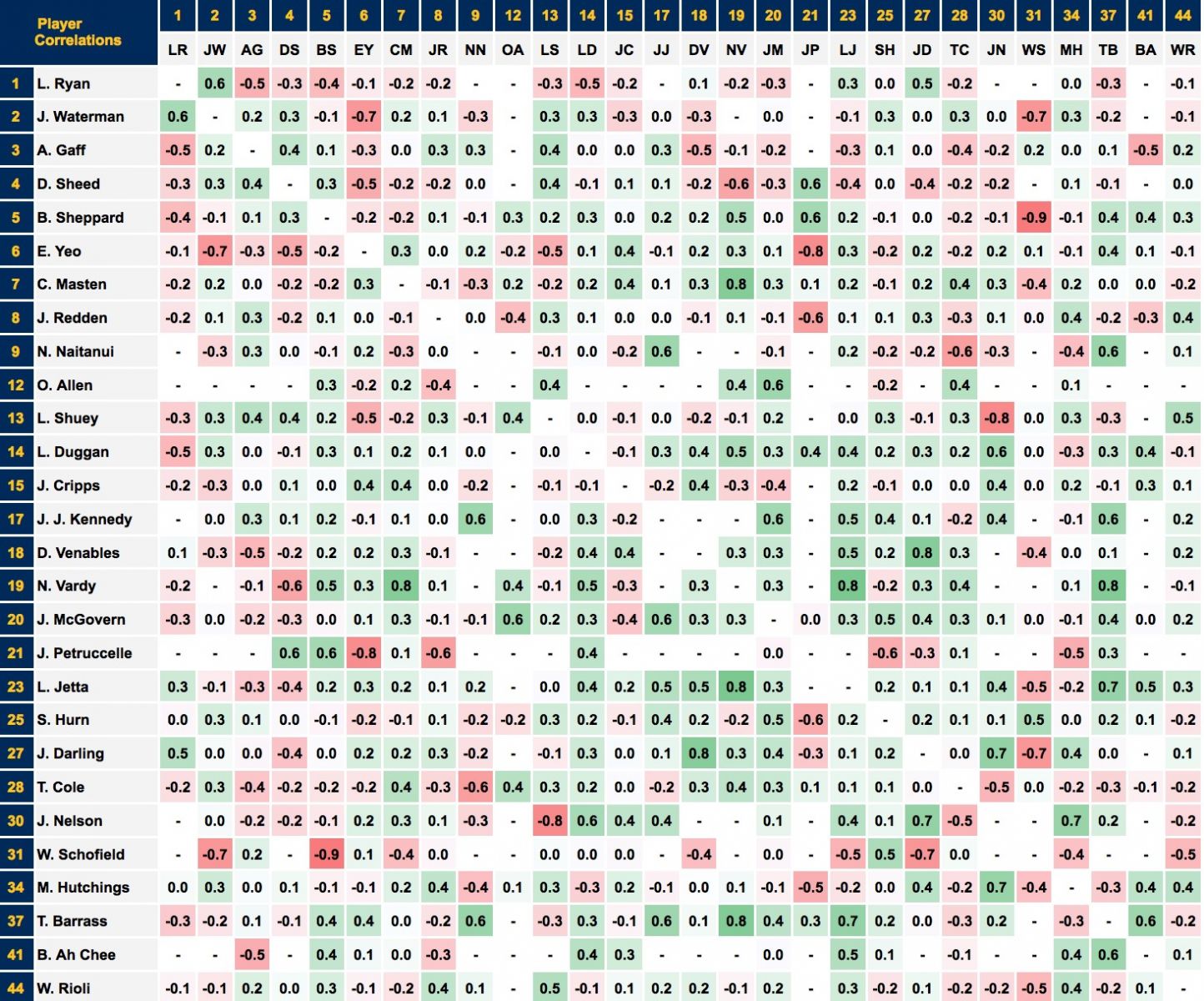 Wet conditions would likely suit inside midfielder Jack Redden. If you begin your stack with him a pairing with Luke Shuey (+0.3 correlation) and Mark Hutchins (+0.4 correlation) would form a solid base to build around.

This matchup is unique with both teams essentially splitting their ruck duties between two players as you can see from our ruck tool. An added wrinkle is the fact that rain is expected, which would likely drive up the stoppages and ruck scoring. Playing two of the four in this situation might be a positive play.

Both Lycett and Hickey have shown 100+ point ceiling this season, while Vardy is the cheapest option allowing you to spend up elsewhere.

Zak Butters (DS $8,470, MB $5,000) ... value plays are hard to come by on this slate, particularly when considering the forecast conditions. Butters stands out as both someone who should provide forward pressure in the wet through tackles, but also has the type of skills where he will make it look like a dry day.

Sam Powell-Pepper (DS $10,200, MB $6,500) is a pure GPP play as he brings a floor in the 40s, but has also shown upside with scores of 97 and 101 so far this year. He should suit the wet conditions with inside play and tackling being his main skills.

Jack Redden (DS $13,090, MB $8,700) looked settled back into his typical role last week with Andrew Gaff back into the side posting a massive 127 points. He has over 10x upside at this price and if the conditions are wet as expected that will suit his game style. He also loves playing at Optus where he has averaged +8.5 points over 16 games and a whopping 121 points over his last 5 games on the ground.