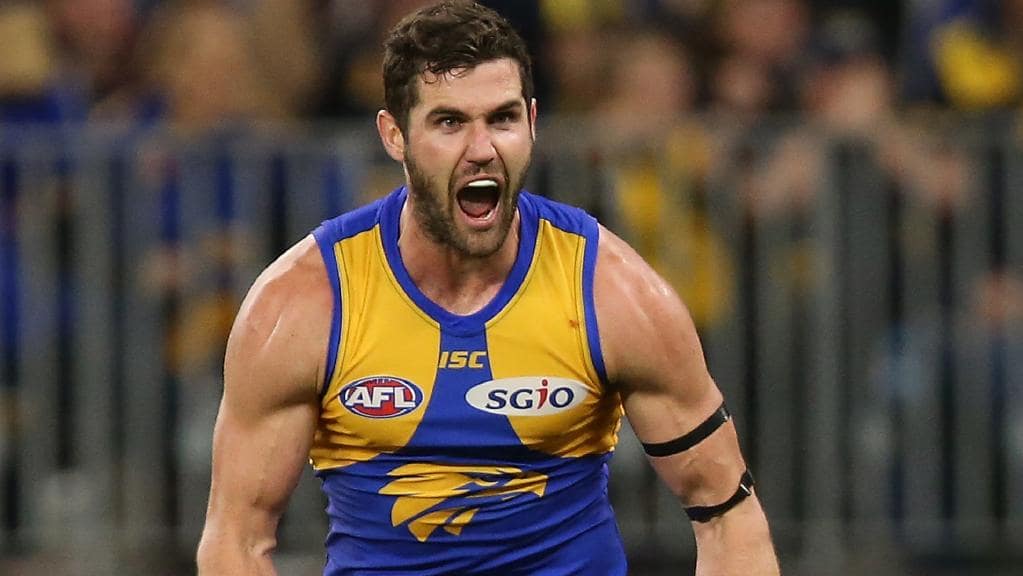 Welcome to the first monster five game slate of the season as super Saturday returns for round 7. The major tournaments on offer for this slate include:

Where to start… This slate has four of the top five teams for fantasy points conceded in 2019. Richmond have given up the most points in the league this season at a whopping 1,728 per game, which is over 63 points per game higher than the next highest. Melbourne, Gold Coast and Hawthorn are also highly targetable, while teams playing GWS and Brisbane should be avoided.

Attacking Richmond and Hawthorn via the backline has been a positive play all season with the two teams conceding the most points in the league to the position. The Tigers in particular stand out conceding 80 points per player, and an incredible 98 points per player to the top three opposition scoring backs.

Gold Coast has continued its trend from 2018 by conceding the most points in the league to opposition midfielders. Melbourne and Richmond following closely behind, while GWS, Brisbane and surprisingly, St Kilda, have been among the stingiest teams.

Forwards against Melbourne have stood out this season as they have conceded the most points in the league to the position. They have been particularly leaky to the top scoring players giving up 92 points per player to the top three scoring forwards, which is over 7 points per player higher then the next team.

We can easily put a pen through four teams when considering rucks on this slate with Melbourne, Brisbane, Gold Coast and GWS being the four hardest teams to score against. At the other end the Western Bulldogs stand out as the team to target, conceding 99 points a game to the opposition ruck.

Game stackers will be licking their chops on this slate, particularly with GWS and West Coast both over 5 goal favourites. The Eagles are the obvious choice, with a line set at 47.5 points against the Gold Coast Suns over in the West, and favourable prices due to their recent form, it will be hard not to load up on them. 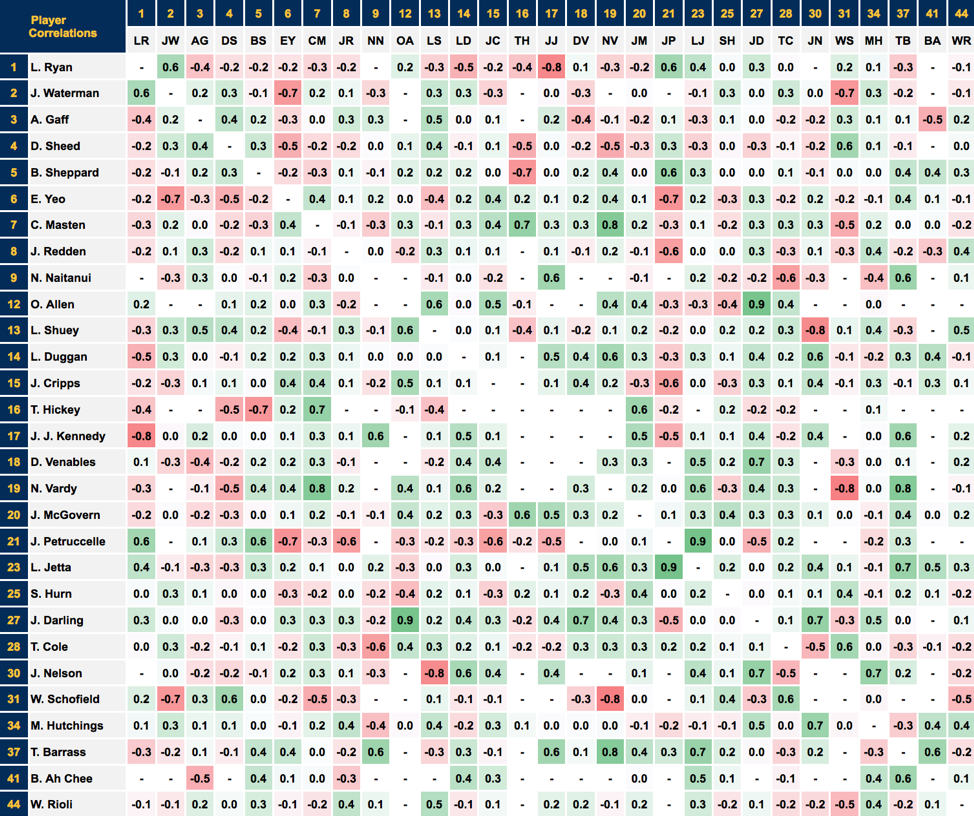 Loading up through the midfield is the obvious play with Gold Coast giving up the most in the league to the position (as mentioned above). Andrew Gaff is the link man on this side and he correlates strongly with Luke Shuey (+0.5) and Dom Sheed (+0.4).

Meanwhile up back captain Shannon Hurn is the obvious starting point and he has paired well with Jeremy McGovern over their time with a positive 0.4 correlation.

Jack Darling (DS $8,660, MB $5,300) is matched up against Gold Coast at Optus Oval in a game the bookies expect West Coast to win by just under 50 points. While his form has been absolutely miserable to start 2019, he has still had averaged 76.9 points in the Eagles three wins this year , which is just under 9x at this price point. It is rare that you can find a player with 150 point upside at this price, and if there is any matchup Darling can reach his upside, or atleast raise the bat this is it. At Optus Oval he has averaged +11 points over his last 17 games on the ground.

Jonathon Marsh (DS $5,000) has not played an AFL game for over 900 days. He makes his return with St Kilda on this slate matching up against GWS. In his last season he played 10 games for Collingwood averaging 58.4 fantasy points, which is more than a valuable return for a player at a minimum price point. Marsh is also returning as a mature aged player with previous AFL experience and additional years playing in the WAFL. He makes for a great value option that allows you to spend up elsewhere on this slate.

Toby Greene (DS $10,810, MB $6,600) shows a return to form last week in the Giants 41 point win against the cross town rivals Sydney. Despite topping the 100 point mark Greene’s price has not increased significantly, and on this slate the Giants are once against expected to win by 5+ goals. In the last 37 wins Greene has played in he has averaged 94.5 points, which is a strong return at his current price point.

Jason Johannisen (DS $13,080, MB $7,100) is my favourite back on this slate. As mentioned above the Tigers have conceded a massive amount of points to defenders in 2018. This will be an obvious angle to take, but while players will look to Caleb Daniel it is Johannisen who brings the higher ceiling. More importantly this game is at Marvel Stadium where Johannisen has thrived over his career, including a form line of 101 points per game at this ground over his last five matches there.

Stefan Martin (DS $12,830, MB $7,700) is the flier on this slate. Matched up against Callum Sinclair who conceded 113 points to Shane Mumford last week and gave up 97 points per game to opposition number 1 rucks in 2018, the fourth most in the league. Martin should be under owned on this slate and he has crept back into form scoring 91 points against Jarrod Witts last week. 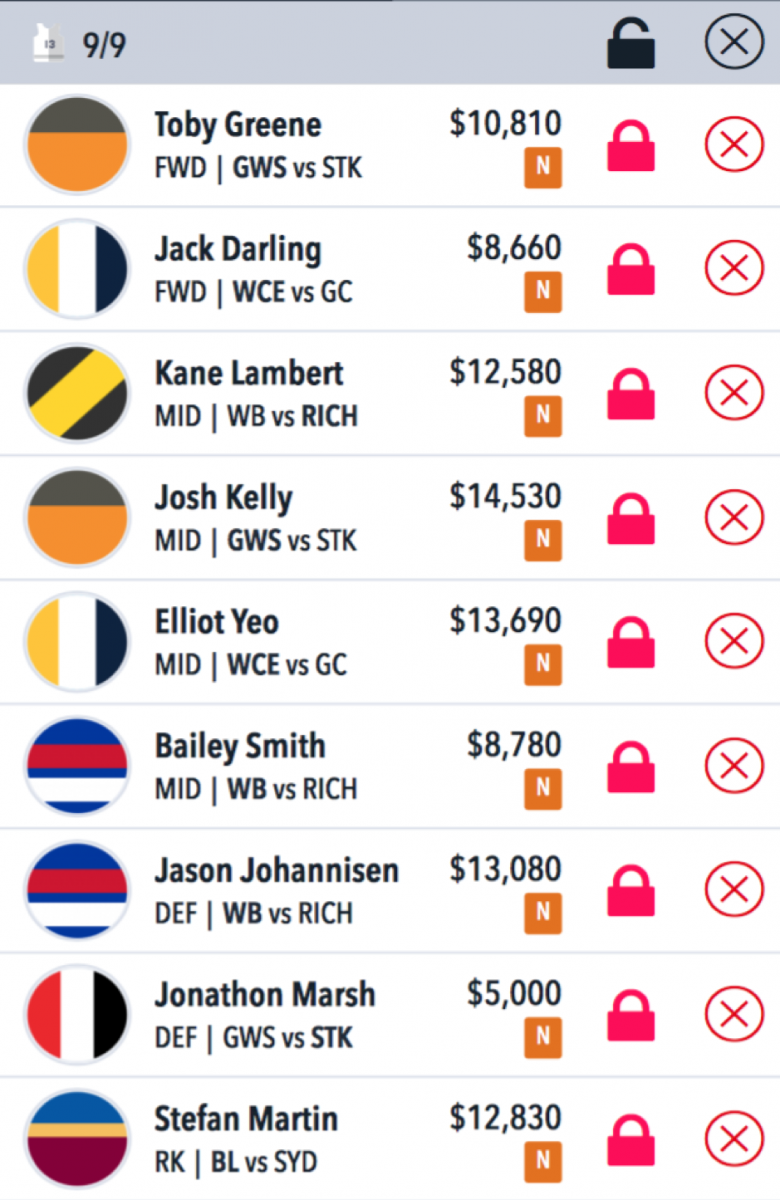