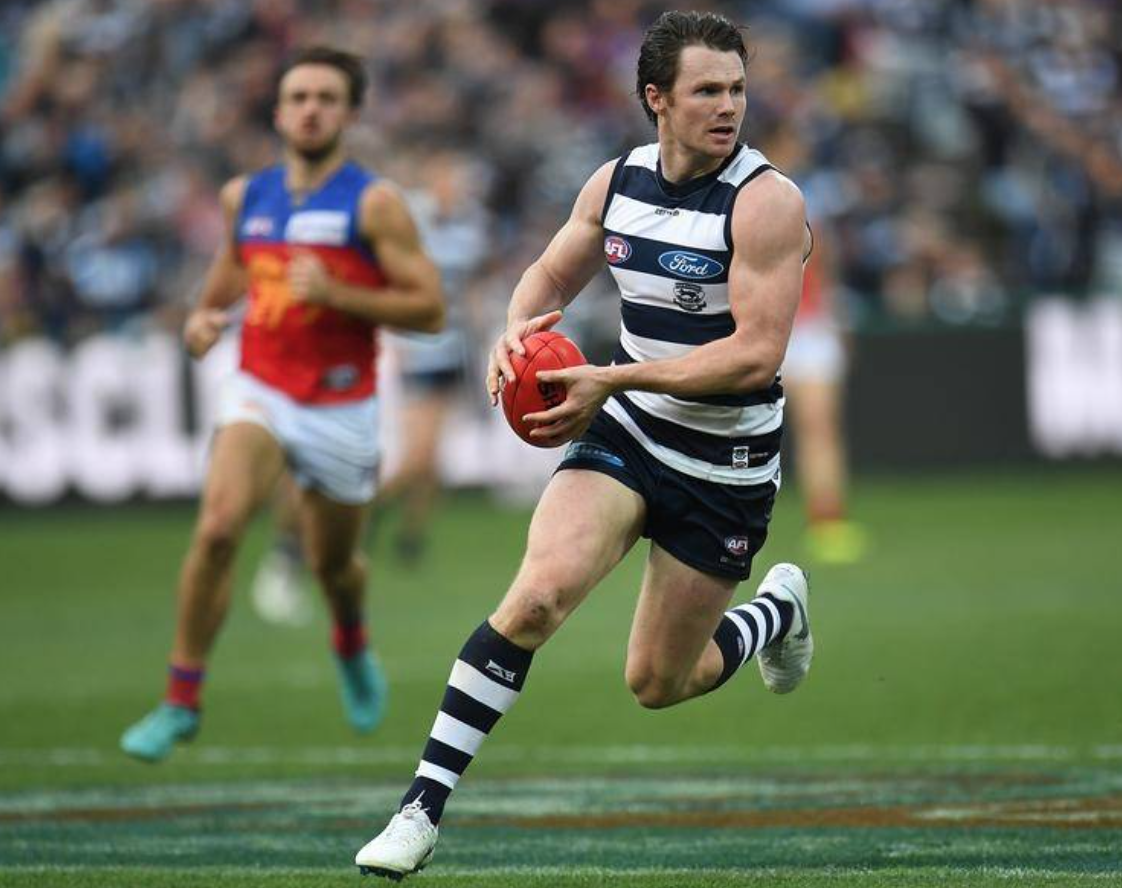 The second weekend of finals footy is here with both games featuring a major single game DFS contest on the platforms. We will be breaking down each individual game to help you pick the best possible team. This first game of this finals round is Geelong vs West Coast at the MCG on Friday the 13th of September, at 7:50pm AEST. The major contests include:

Smatho and Big Hef from the DFS Down Under Show broke down this matchup between Geelong and West Coast discussing their DFS plays. Hef also agreed on Smatho's sneaky bet! Check them out here!

CHECK OUT OUR GEELONG VS WEST COAST CHEAT SHEET HERE

No shock that this game will be a difficult one to break down with two of the top teams facing each other. Geelong in particular have given up the fewest fantasy points in the league in 2019, while West Coast sit just below league average.

Interestingly, despite being the stingiest team overall Geelong are slightly above league average for 100+ scores conceded this year. This indicates that while they aren’t necessarily the best target for players with lower ceilings, you can still comfortably roster premium players against them.

Forwards against Geelong are typically a no go zone, giving up just 54 points per player this season which is 4 points per game lower than the next lowest mark. West Coast are also quite stingey up forward, however we are going to have to roster someone up forward. The avenue that looks the most attractive is key forwards against the Eagles, as digging into the numbers they have given up a league average amount to that position.

Ruck is the stand out position to target against Geelong, with the Cats having well publicised ruck dilemmas after last weeks bizarre decision to go with Blicavs as their number 1 ruckman against Brodie Grundy. Geelong have given up 92 points per game to the oppositions number 1 ruck this season, which is the 6th highest in the league. The real conundry comes with trying to play a ruck from the Eagles with the role now being split between Nic Naitanui and Tom Hickey.

Geelong have not used a tag all season according to our tagging tool making it all clear when rostering West Coast players in this matchup. On the other side, however, Mark Hutchings has been the Eagles regular tagger. Early in the season he was doing jobs on the oppositions number one midfielder, and when the Eagles played the Cats earlier in the season he ran with Tim Kelly.

As the year went on, however, his role was taken out of the midfield and typically utilised to lock down half backs. And West Coast game plan in their first matchup of the season did not work effectively, as such I would expect this to continue. Possibly matchups could be Tom Stewart, however with the Cats having no major threat running out of the backline Hutchings might not be given a clear role in this game. 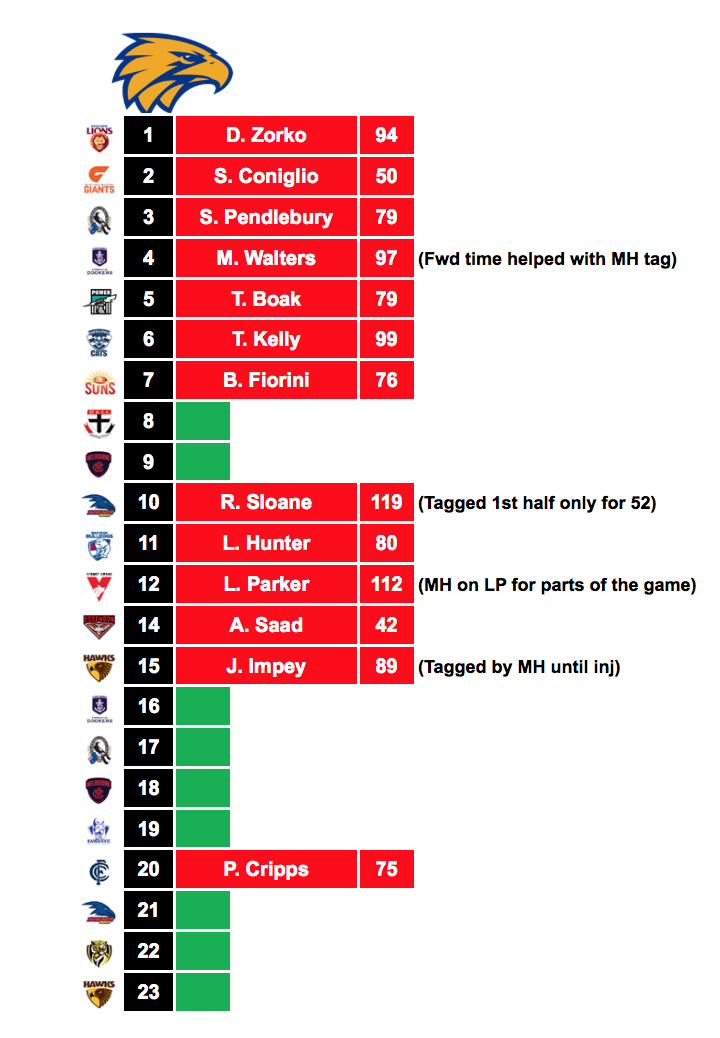 Quinton Narkle (MB $4,600, DS $8,260) is once again in play. His price on Draftstars has dropped back down again after a poor performance last week against Collingwood. That said, he was still spending plenty of time in the centre and with Mitch Duncan now out, there will be roles that will be picked up by other players (monitor the ins as Cam Guthrie will be an obvious choice to help fill this position).

As I have mentioned recently, Narkle had been spending time in the midfield at VFL level posting 20+ possessions in his last 5 games before being called up in round 21. In his first game for the Cats this year at GMHBA Stadium he attended 4 out of the teams total 14 centre bounces and spent plenty of time around the ball while racking up a huge value return of 93 fantasy points. This continued against Brisbane, attending 7 centre bounces, however he wasn't able to produce a similar fantasy return in a tougher matchup. Against Carlton in the final round he once again spent plenty of time on the ball and filled up with a massive 111 fantasy points.

In these single game finals matchups the value plays are typically tough, but Narkle certainly stands out as a player with significant upside and a role conducive to being able to post a GPP winning score.

Tom Hawkins (MB $6,200, DS $8,740) is a value play on Draftstars only. This is a matchup specific play as despite the Eagles having one of the top defenses in the league they are often exposed by a key forward due to the defensive structure they setup. They have given up 73 points per game to the oppositions top scoring key forward this season, which at Hawkins price on Draftstars would likely be enough value in this single game contest.

In addition Hawkins scored 88 points when these teams met earlier in the year, kicking 3 goals 3 behinds. While his performance last week looks mediocre, he did kick 4 behinds indicating there is significant scope for improvement if he can simply kick straight.

Shannon Hurn (MB $7,900, DS $11,990) has seen a price decline after a quiet finish to the season that was disrupted by injury. He averaged 90 fantasy points this year and had a solid record through the Eagles finals campaign in 2018 averaging 90 points through three games. The Eagles game style suits Hurn at the MCG were he has averaged 95 points over his last 5 games at the ground.

Patrick Dangerfield (MB $10,000, DS $15,520) … I will simply be backing the truck over this one after last week. I know I said he was a can't miss play last week, and he was clearly the Cats best player and one of the better players on the ground. Unfortunately the flood of Collingwood junk time scoring over ran him. But everything I said last week I am essentially doubling down this week after the flak the Cats have copped in the media this week. Danger will come out breathing fire playing the majority of his time through the midfield and as noted last week he has been a consummate finals performer over his career, averaging 113 points per game over his last 5 finals for Geelong. He has averaged 107 points per game over his last 25 matches at the MCG and posted 138 fantasy points in the matchup against the Eagles earlier this year.

As mentioned above Geelong have not employed a tag all season and therefore Shuey should run free, and in addition premium midfielders are the one of the few areas that Geelong have given up a league average score to this season. 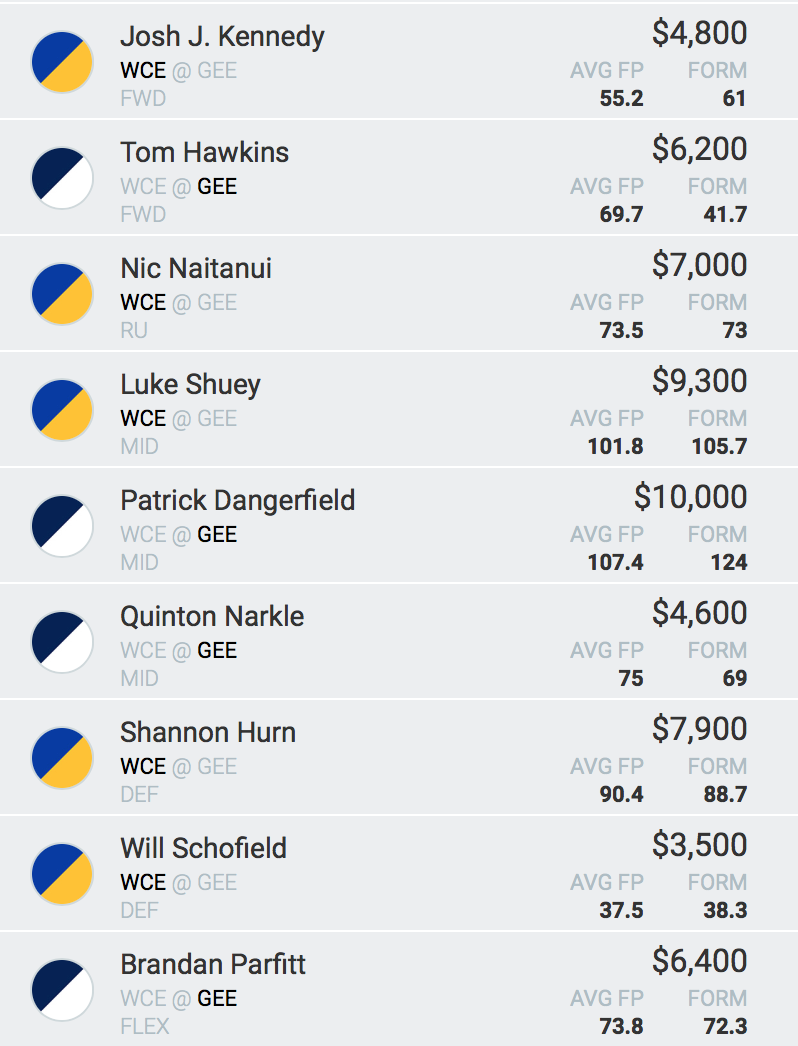 CHECK OUT OUR PREVIEW FOR LIONS VS GIANTS HERE 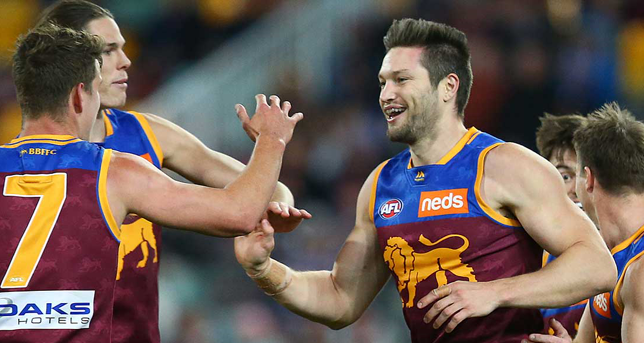