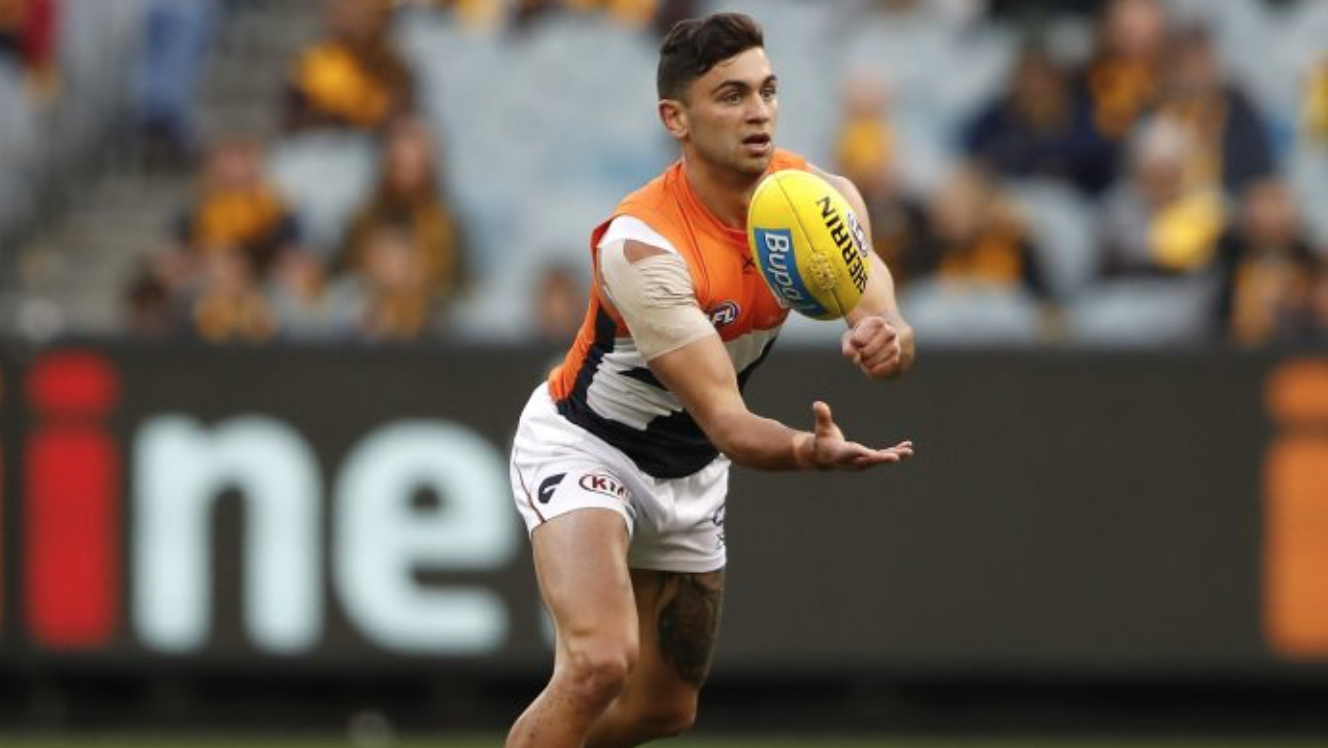 AFL Grand Final week is here!! Richmond will face off against GWS Giants at the MCG this Saturday at 2:30pm AEST. There are massive DFS contests for the Grand Final being held on both Draftstars and Moneyball for the game this weekend. We have broken down the game in detail to help you pick the best possible team. The major contests include:

It has been a massive year and it has come down to one AFL DFS slate. Hef and Smatho provide their preview and plays for the Grand Final. You cannot simply ignore on what these two have to say - catch the latest episode right here!

CHECK OUT OUR RICHMOND VS GWS CHEAT SHEET HERE

At first look the team to target looks obvious with GWS being one of the toughest teams to score against all season giving up the second fewest points in the league this year. While the Tigers, on the other hand, have been a team to target in 2019 giving up the fourth most points in the league. As a result it is not surprising that in both matchups between the teams this season the Giants had the majority of the biggest fantasy scores, with the result of the match not having a major impact:

It is worth highlighting that a closer inspection of recent performance (including finals) does tell a different tale with GWS giving up an extra 100 points per game over their last 5 weeks, while Richmond have conceded over 100 points fewer during that same period.

Further supporting the past fantasy results between these two sides is the fact that Richmond have been a great team to play premium players against this year. As mentioned last week they have conceded the most 100+ scores in the league in 2019. In their first final they gave up three 100+ scores and another 4 90+ scores, despite winning by 47 points. In the preliminary final they won by 19 points but still conceded 2 scores over 100 (including a 150 point performance), along with another 2 scores of 97+. So, even with the Tigers as favourites in this matchup rostering stacking up GWS premium priced players will be an elite play.

Backs against Richmond has been a strong play all season. This has not changed as Richmond found form down the stretch of the season, or during finals. The Tigers have given up the 5th most points in the league to backs, and 88 points per game to the top 3 scoring defenders on the opposition’s team. Their structure will remain with an extra man in defence, which inevitably results in the opposition team possessing the ball across half back (particularly as the Tigers start turning the screws with their pressure).

The fantasy battle of the midfield I would expect to be won by the Giants. They have several fantasy friendly players through this position and the Tigers have typically given up large scores conceding 110 points per game to their opponents top 3 scoring midfielders in 2019. The Tigers don’t tag, which we will cover further below, on the flip side when they have the ball move it quickly and directly.

GWS on the other hand have generally restricted scores against midfielders giving up the second lowest amount in the league to the position this year, and the lowest to the top 3 scoring players.

The ruck contest should be interesting from a fantasy perspective. Shane Mumford has been an obvious target this season with the Giants giving up 97 points per game to the opposition number 1 ruckman. While Richmond have been a target for rucks going on two seasons now, conceding 94 points per game in 2019.

As per last week it will be a wait and see job with the Tigers as to whether they continue with a dual ruck setup. Given they have utilised it in both finals so far I would expect this to continue. This dual setup limits their upside with just one score over 70 between the two players from their two finals. It hasn’t proved to impact opponents scores, however, as they have conceded 98 points to Martin in their first final and 97 points to Stanley in the prelim.

At this stage in the week it looks like perfect conditions for Grand Final day. As usual keep an eye as the game approaches, however there should be no rain at the ground on the day.

As we have noted all year Richmond have not tagged once this season. This is a trend that has continued for two full years now and as such it is extremely unlikely we see a GWS player targeted in the grand final.

GWS, on the other hand, bring the best tagger in the business. Matthew De Boer has been crucifying fantasy dreams all season with one of the best seasons in recent memory for a tagger. He has yet to concede a score over 100 points this season as highlighted by our tagger tool below. This includes three finals where he has Marcus Bontempelli, Lachie Neale and Scott Pendlebury to an average of 74 points across three weeks.

The obvious target in this matchup will be Dustin Martin. In the two matchups between Richmond and GWS this season Martin has been the subject of a tag on both occasions, once by De Boer (held to 68 points), and in De Boer’s absence by Loyd (held to 83). Martin will likely take De Boer forward, however he is still an easy fade due to this matchup. 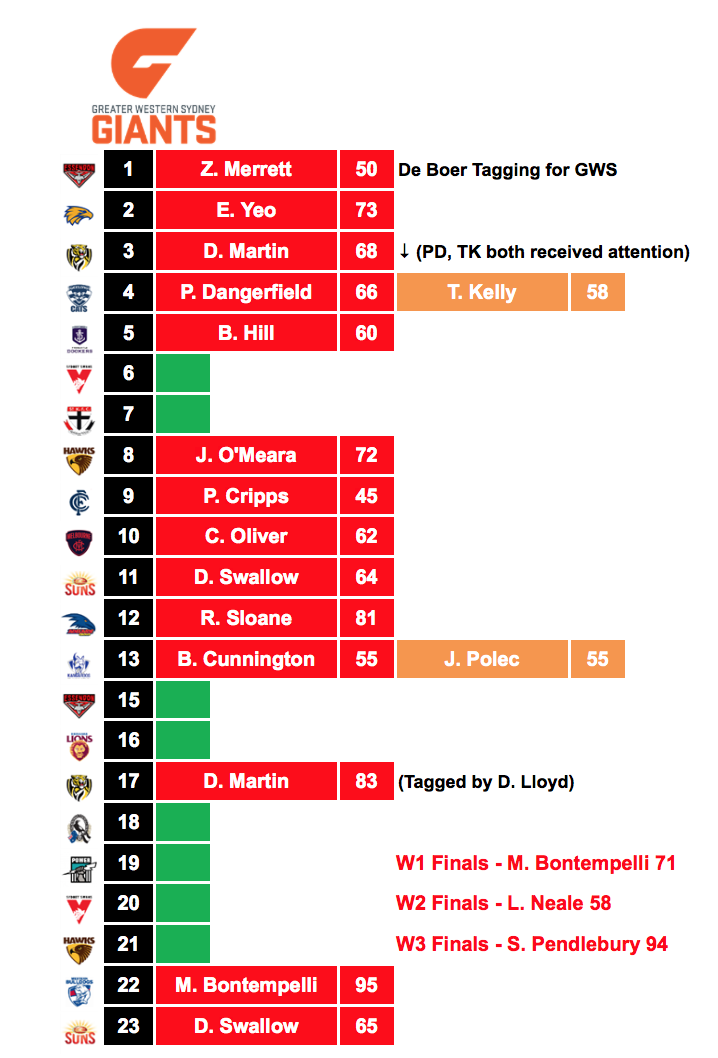 Marlion Pickett (MB $3,500, DS $6,000) He's the surprise inclusion in this matchup, making his debut in an AFL Grand Final. Pickett has shown flashes of brilliance since being picked up in the mid-season draft and was best afield in Richmond's VFL Grand Final win last weekend. At minimum price, Pickett is a lock and load at both sites, making him the easiest selection of the day.

Jack Riewoldt (MB $5,900, DS $8,480)... like last week remains a value play at his price on Draftstars. Last week against Geelong he had a dismal outing, but still had the opportunity late to return a decent enough score if he didnt kick 3 behinds. Tom Lynch has stood out as the star up forward for the Tigers during this premiership run, but it is likely GWS will key their in form defensive structure around him. It is somewhat of a gut feel here, but I like Riewoldt to bust out on the big stage this week and also believe if this doesn't happen he will have late opportunities if the Tigers get on top and the game blows out late.

Liam Baker (MB $5,400, DS $8,770) is another value play that stands out at his price point on Draftstars. Baker had a brilliant start to the 2019 season rotating between forward and midfield, he flashed upside of 110+ fantasy points and two scores of 90 plus, showing a capability to find the football. Later in the season he has since moved to half back, which opens up the option of being linked with other Tigers back in the hope they link up for uncontested possessions. In this role he has posted an 88 point game in the last game of the regular season against Brisbane and a 67 point game last week against Geelong.

Aiden Corr (MB $3,900, DS $6,410) is a value play option on both platforms if you are looking for salary relief to squeeze in more stars. He also makes for a decent link play with GWS backs who as we mentioned above, are likely to possess the football against the Tigers structure (Tigers have given up the 5th most points in the league to backs this year). Corr has been involved in play during the finals as GWS have switched and controlled the tempo posting an average of 60.5 fantasy points in their last two games.

Shane Edwards (MB $7,100, DS $11,090) … Sure he didn't pay off last week, but his role didn’t change. All this means is a better price this week and hopefully lower ownership. As I have noted in past weeks, Edwards has now essentially moved into a permanent midfield role for the Tigers as the season drew to an end. From Round 20 onwards, he's averaged 20 centre bounce attendances and 94 fantasy points per game from his last four regular season games. In the first final he destroyed the Lions with 29 touches and eight clearances en route to 118 fantasy points. As noted above, GWS will put work into Dusty Martin in this matchup, which means surrounding midfielders will have to pick up the slack.

Shane Mumford (MB $5,600, DS $8,780) is the clear choice at ruck at this point in the week. With the expectation that the Tigers will continue to play a dual setup of Nankervis and Soldo, while Mumford will assume full responsibilities for GWS. Despite getting the full duties to himself, Mumford is still the cheaper option of the three rucks. He has averaged just 60 points in three finals so far, however, this will be one of his easier matchups against Richmond who have given up 94 points per game to the opponents number one ruckman this year.

Nick Haynes (MB $7,000, DS $11,460) has played the best football of his career in 2019 averaging 78 fantasy points per game. He was one of the best players on the ground in the preliminary final against Collingwood, posting 118 points and racking up 30 disposals and nine marks. The Giants will need a similar performance and the matchup should setup Haynes to repeat this with the Tigers giving up 88 points per game to the top 3 opposition defenders in 2019. The last time the sides met at the MCG this year Haynes took advantage of the Tigers structure to score 101 fantasy points, despite GWS losing the game. This could be a similar game script, making Haynes safe for both GWS and Richmond stacks. As mentioned above, he looks to be a solid link with Aiden Corr.

Tim Taranto (MB $9,500, DS $14,780) is the pick of the premium midfielders in my opinion. Taranto’s role in the midfield has been solidified this season regardless of who is playing, so he looms as a safe and justified pick.

As noted above the Tigers have given up the most 100+ scores in the league this season, and 110 points per game to the oppositions top 3 scoring midfielders, which gives GWS the lean when spending up. The Giants will be fully stocked as well with Lachie Whitefield and Toby Greene also returning. Greene is a clear fade as he is to spend more time up forward again, Kelly has spent more time on the outside since returning from injury.

Taranto has had a field day against the Tigers setup this season, averaging 117.5 points from their two matchups, and he stood up on the MCG last week against the Magpies posting 122 points. He also brings a slight salary saving in comparison to the other premium midfielders. 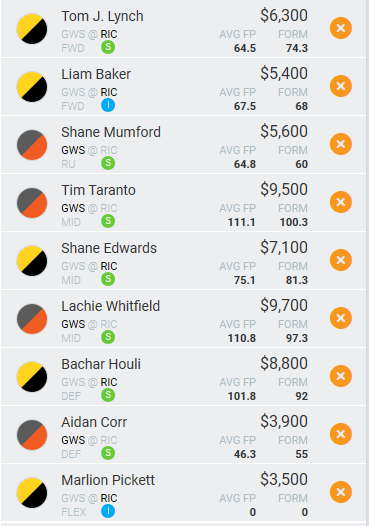