The Fremantle Dockers have been disappointing for a couple of seasons now and while they landed a couple of big fish at the trade table, the loss of Neale has left a gaping hole in their midfield. Despite having plenty of young talent coming through, they may again be in for a tough year while the youngsters develop. 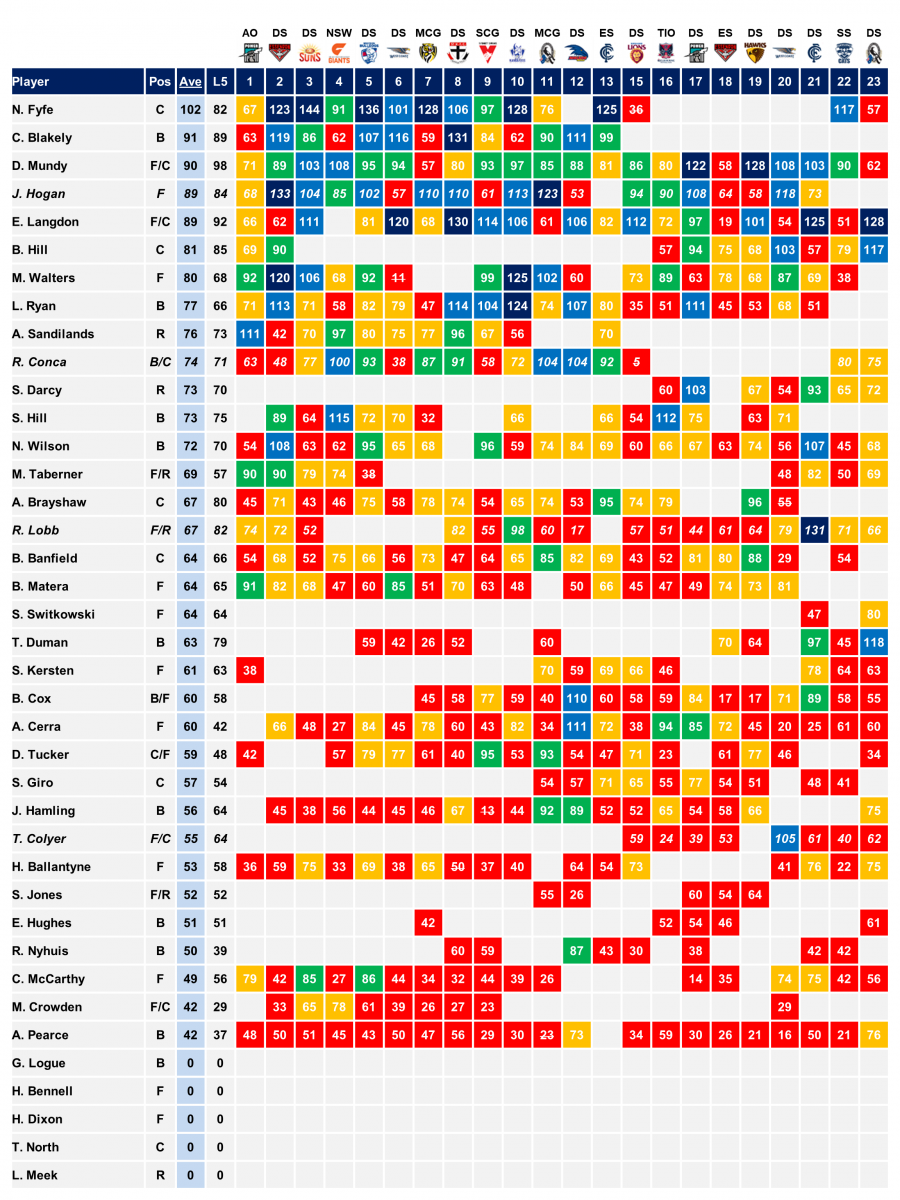 Fremantle were very busy in the off season and really changed the look of their forward line with the massive acquisitions of Jesse Hogan and Rory Lobb. Hogan has had a few injury concerns but flashed a ton of upside last season when the Demons started to run him through the middle of the ground on occasions. Given the hole in the Dockers’ midfield left by the loss of Lachie Neale, Hogan may get a similar opportunity to get up the ground and has shown that at times through the JLT series. His mobility makes him more of a fantasy friendly target than your usual key forward.

Lobb looks set to play predominantly forward with a minor role chopping out in the ruck, as opposed to when he was required to play long stints in the ruck for GWS, usually with only plain results. While he should relish his preferred forward role at Fremantle, be aware this does limit his upside accordingly.

Fremantle traded out their high draft pick in order to bring in Hogan and Lobb but managed to pick up a couple of interesting fantasy options later in the draft. Luke Valente averaged huge numbers in the SANFL U/18s and did look ready to go early but has had some injury concerns through the preseason. Keep an eye on him if he manages to crack into the side as his ball-winning ability should make him a bargain initially at a low price.

Later in the draft Fremantle took VFL midfielder Brett Bewley, who averaged 98 points per game in that competition last season. He is a hard-running winger who knows how to find the pill but found himself somewhat on the outer for the 2nd JLT game and received limited time on ground. Being a mature-aged recruit he will measure up immediately against the bigger bodies and is another cheap option to be aware of when he breaks into the team.

Andrew Brayshaw is well known for reasons he would prefer not to be, but it won’t be long until he is known for his piggish fantasy tendencies. His debut season returned a fine average of 67, ticking upwards to an average of 80 across his last 5 games, and he has gone on with that in the JLT series this season. He top-scored for his side against the Eagles in their last hitout with a score of 94 in 78% game time and looks set for a ton of midfield time given the loss of Neale. Expect him to be under-priced to start the season and it would be no surprise to see him in some winning lineups.

Darcy Tucker is another who looks to be getting more midfield minutes through the preseason and has been exceptionally tackle-hungry playing a very accountable role. His JLT series average of 91 is well above his average last season of 59, but just be wary it has been boosted by 21 tackles across the two games. If he maintains this role into the season proper he will offer plenty of upside at a relatively low price.

Bailey Banfield did many jobs last season for the Dockers and overall they used a tagger in 11 of their 22 games. His highlight was clearly restricting Aaron Hall to just 14 points early in the season but the Dockers allowed 90+ points to their target on 8 occasions. Banfield was also used in a forward role at different times to restrict the effectiveness of players such as Hibberd and Vlaustin.

Nathan Fyfe is the obvious target for taggers and they did slow him up to some degree last season, resulting in a 92 point average for the 6 games he was tagged, against his season average of 102.

Fremantle gave up the second most points against of any team in the competition last season and they didn’t discriminate, generally finishing in the top 5 against backs, centres and forwards. They weren’t glaringly obvious to target at any position, and were more competitive at home than on the road, but playing anyone against Fremantle was rarely a mistake.

If there is one time to avoid playing someone against Fremantle, it is rucks when Aaron Sandilands is patrolling the middle. Obviously his height makes it hard for opposition ruckmen to rack up the hitouts which affects their score, but he only featured in 11 games last season and has an injury-interrupted start to this year. While the table below shows they were mid-table in terms of points allowed to ruckmen, this number continued to rise while Sandilands was injured, highlighted by a last 5 game average of 99 while Sean Darcy was first ruck. 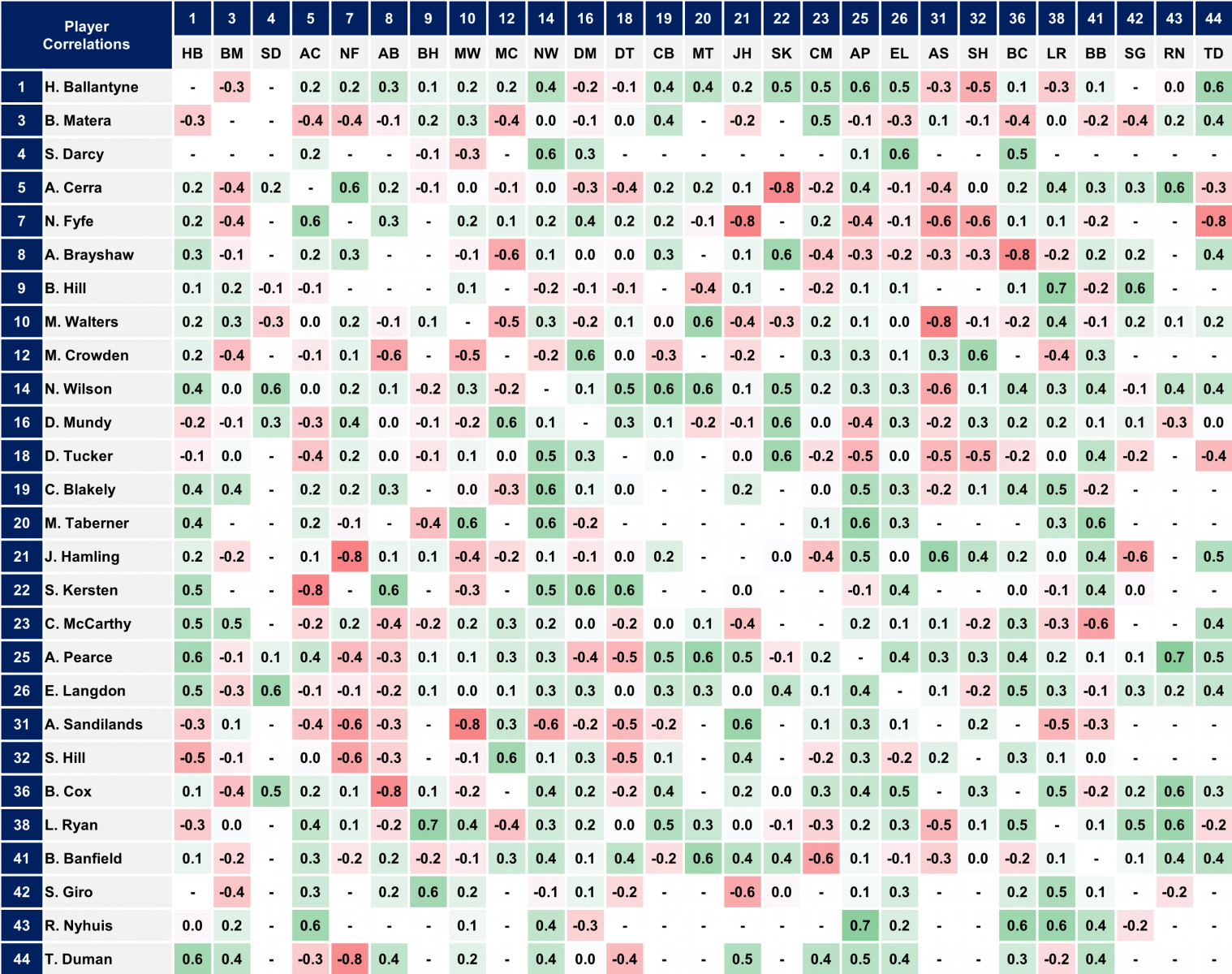 One of the strongest correlations last season for the Dockers was linking up their defenders, predominantly Connor Blakely with Luke Ryan and Nathan Wilson. Now obviously Blakely is injured for a major part of the season, however it is an insight into the Dockers’ ball use in the back half and playing a pair of Freo defenders can be a winning strategy.

Looking towards the midfielders, captain Nathan Fyfe has linked up well with David Mundy and given Mundy’s propensity to return to the midfield this season with the exodus of Lachie Neale, these could be two major ball winners to build around.