Hawthorn are predicted by many to fall down the ladder this season after a somewhat surprising top four finish in 2018. The biggest question mark will be whether they can cover up for the loss of last years brownlow medalist Tom Mitchell who unfortunately broke his leg during preseason and is set to miss the season. 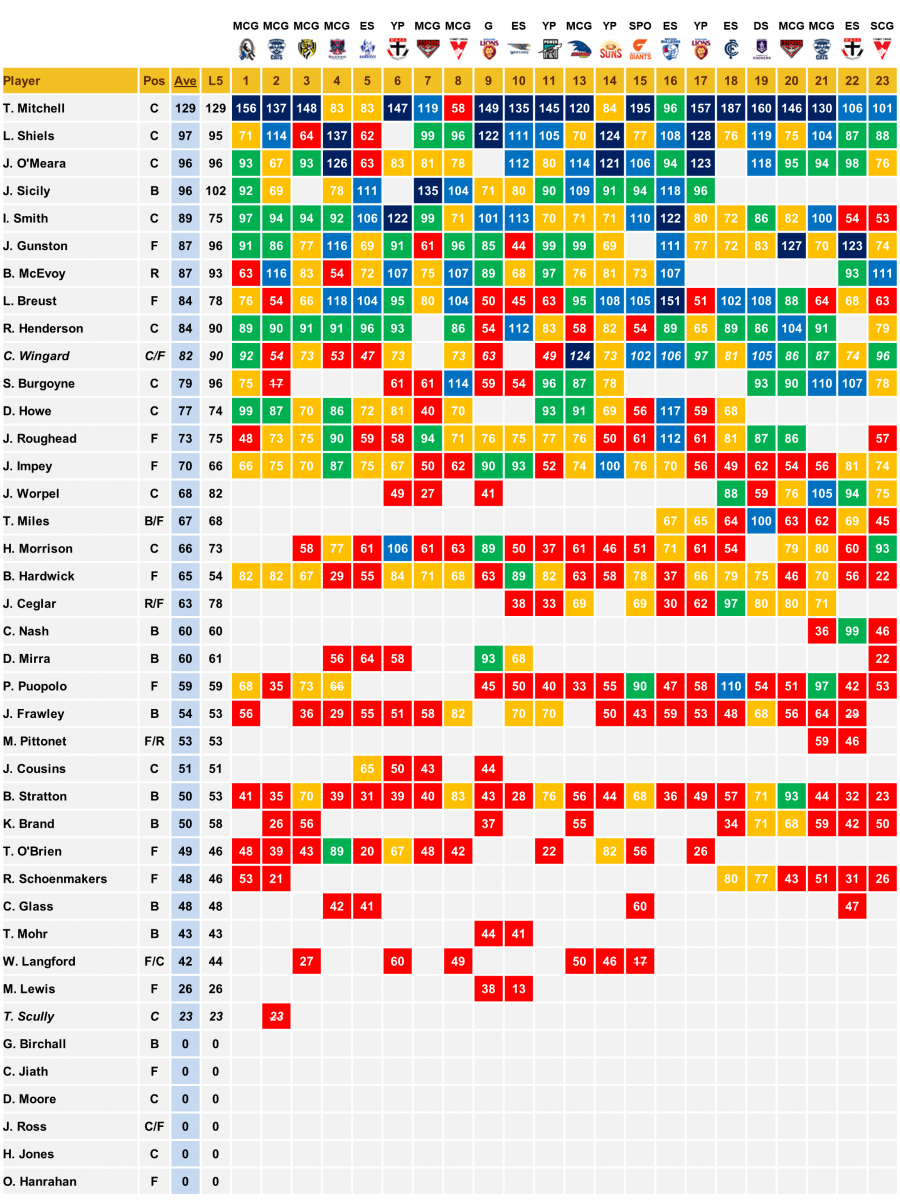 The Hawks were very active again this off season but of their acquisitions none was bigger than picking up Chad Wingard via trade. Despite giving up heralded youngster Ryan Burton in the deal this was still a major coup as Wingard is expected to bolster the Hawks midfield and provide further support up forward as required. Wingard is set to miss the start of the season due to injury, but when he returns he should receive a steady stream of midfield time at the Hawks, particularly with Tom Mitchell out for the season.

Tom Scully was also picked up via trade from Greater Western Sydney. Scully missed the majority of last season with a severe ankle injury and at this point shouldn’t be expected to play senior games for the Hawks until mid season at best. Monitor his price and form when he does return as Scully should fit right into the Hawks possession style of football (Hawthorn averaged the 6th most uncontested possessions in the league last year).

Former number 7 pick in the 2016 NAB AFL Draft, Jack Scrimshaw, was also acquired by the Hawks in a trade. He will look to immediately fit into a role across half back after two solid performances in the JLT where he averaged 18 possessions and 65.5 fantasy points.

There are two stand out and somewhat obvious value options at the Hawks who quite possibly will be hoping that two James can cover up for one Tom.

Firstly, James Worpel, was on everyone's watch list coming into this season after the way he concluded 2018. From rounds 18 to 23 last year he averaged 82.8 fantasy points and featured prominently in the midfield rotations. With Tom Mitchell out for the season and Chad Wingard missing the early rounds, Worpel looks to have solidified his role in the centre. He is a strong candidate to improve on his 2018 performance and his JLT form did nothing to discourage that averaging 88 points across the two games in just 68% game time.

Then we have James Cousins. He was more of an under the radar option until he blow up in JLT and now you can almost expect him to be one of the higher targeted players come round 1, given I expect his price to be close to the basement after averaging 50.5 fantasy points from four games in 2018. Cousins is expected to be in the midfield rotations early in the season as a result of the aforementioned injuries and playing such a role in the JLT he averaged a massive 96 fantasy points from two games.

The Hawks employed the tag just four times during 2018 with Daniel Howe being their primary run with player. Through these four games Hawthorn were able to have a significant impact on the tagged players output holding them to an average of 19.75 points below their season average.

On the Hawks side Tom Mitchell became a weekly discussion on whether or not he should be tagged. It became a popular ploy with Mitchell getting a player in his pocket a whopping 12 times. With Mitchell out for the season it is unlikely we see another player get that level of attention but monitor how teams are playing the Hawks, particularly Jaeger O’Meara who is expected to be their number one mid this season.

Hawthorn were one of the stingiest teams in the league during 2018 giving up the third fewest fantasy points and the fewest 100+ point games.

There was essentially no avenue to attack them as they were above average at defending each position, but particularly up forward they were to be avoided as they gave up the second fewest fantasy points in the league to that position. 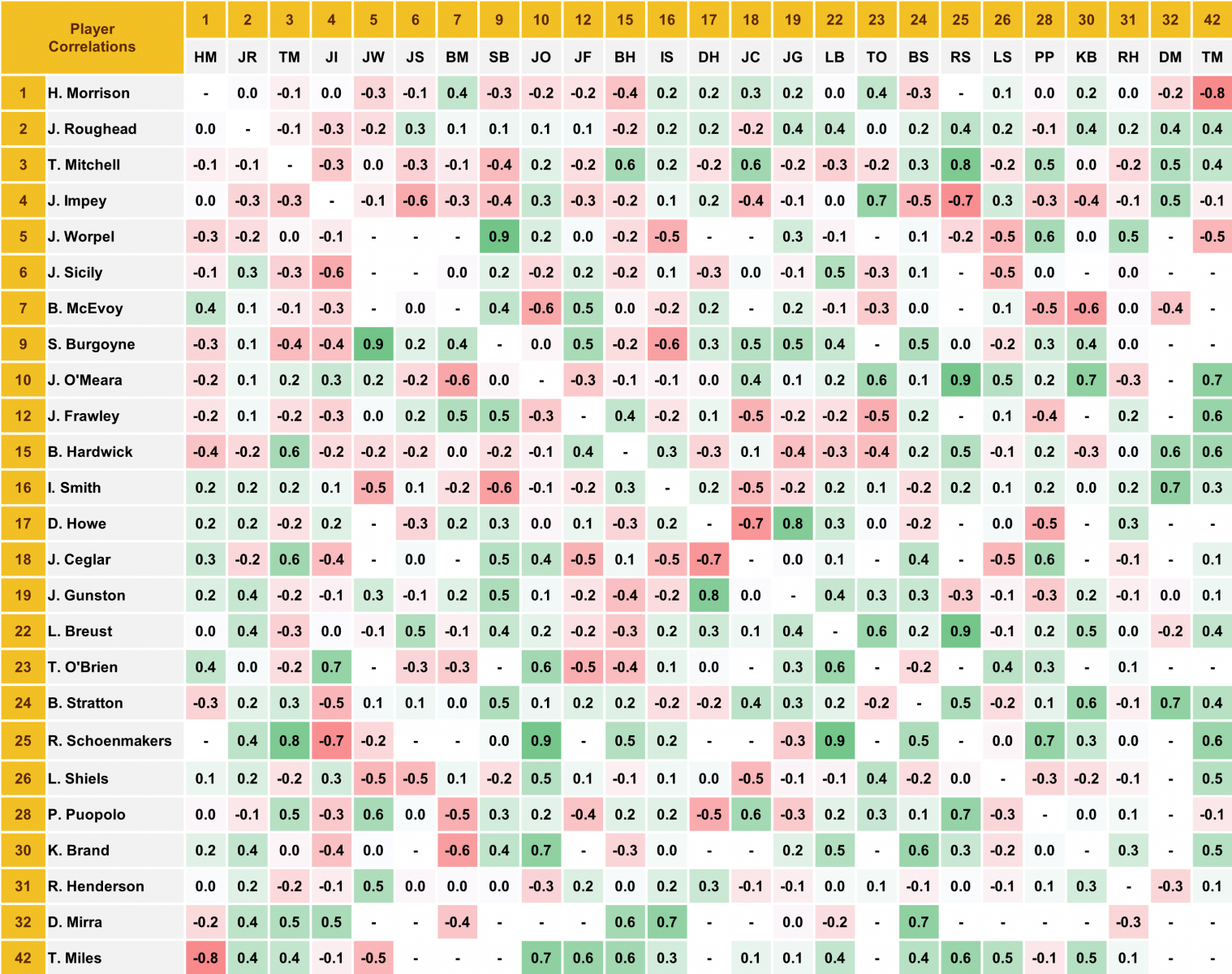 Be wary of interpreting Hawthorn correlations this season, particularly through the midfield given the loss of Tom Mitchell this season. A play that stands out significantly from 2018 however was linking forwards Jack Gunston and Luke Breust. The two had a positive 0.4 correlations and both scored over 90 fantasy points in the same game 5 times.