North Melbourne were a popular fancy to slide down the ladder last season but they gave an extremely bold showing to finish 9th. They shopped well in the offseason to fill a few glaring holes so present as an intriguing side heading into season 2019. 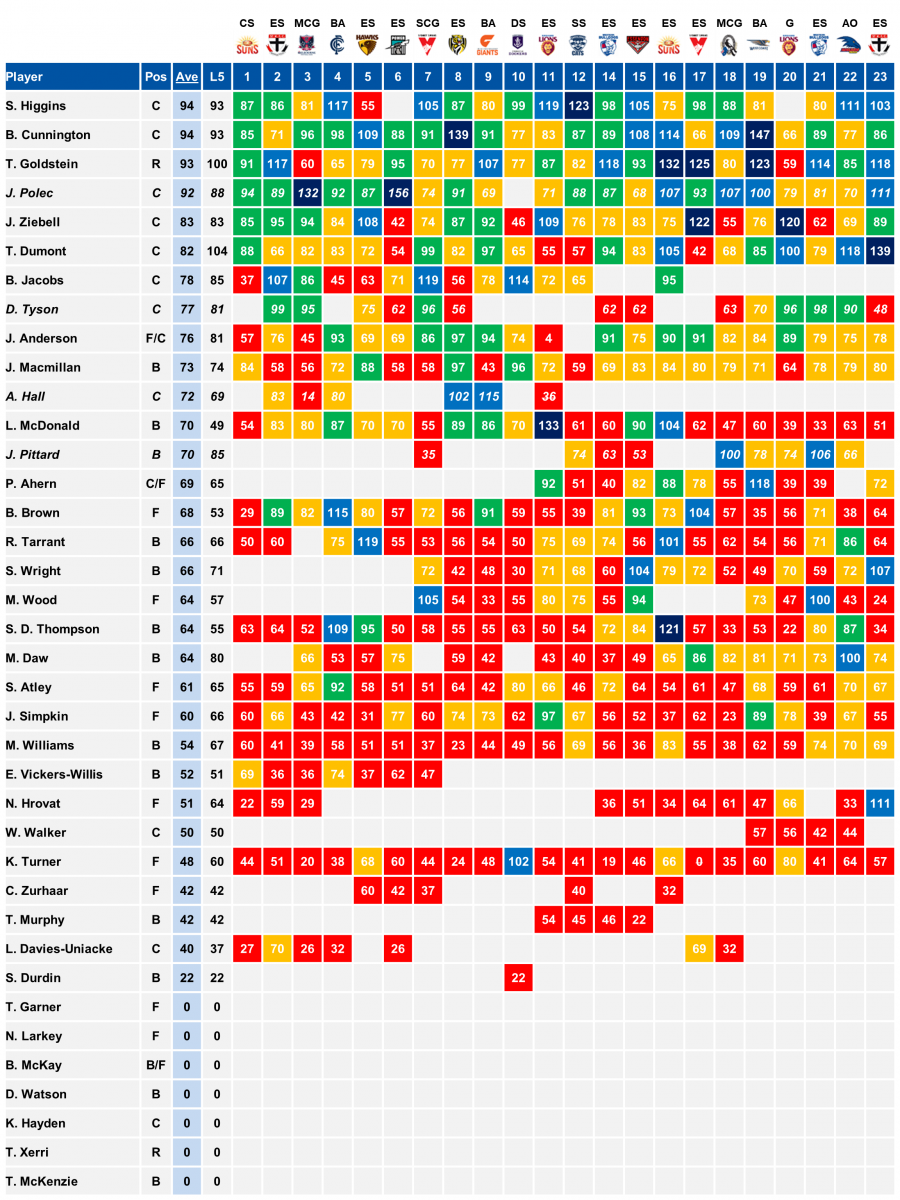 North Melbourne have struggled for quality outside run for some time and took steps to address over the offseason with the acquisitions of Jared Polec and Aaron Hall.

Polec put together a very good year for Port Adelaide in 2018, averaging a career-high 92 points, and is finally starting to overcome the injury issues which have dogged him throughout his career. He has slotted in superbly during the JLT series, averaging 101.5 points across his two games, and looks set to gorge himself on outside ball for his new club.

Hall fell out of favour at the Suns but has proven himself to be a quality ball-winner when given the opportunity. The defensive side of his game has been a major question mark, keeping him out of the team at times on the Gold Coast, but from a purely fantasy perspective he can rack up big scores when he avoids attention from the opposition. A tag can put him out of play but the change of scenery may do him the world of good.

The Kangaroos also boosted the inside midfield brigade with the addition of Dom Tyson from Melbourne. Tyson fell out of favour with the Demons last year, finding himself in and out of the side and often in an unsuitable role playing on the outside. If they use him inside and release the likes of Higgins and Cunnington up forward more, which has been discussed, then he may return to the higher averages he recorded earlier in his career. However his lack of versatility can let him down and he may find similar issues at his third club.

The Kangaroos showed plenty of faith in Paul Ahern despite a pair of knee injuries suffered when he was playing at GWS. He showed glimpses last season that he can repay the faith many times over, including a monster game against the West Coast Eagles where he scored 118 fantasy points in a 37 disposal domination. With another pre-season under his belt, he looks set to go to a new level this season and is a prime candidate to outperform his salary early in the season.

Luke Davies-Uniacke arrived to the club last season with a huge reputation after being selected early in the draft but he had very little impact at the top level, averaging just 40 across his 7 games. He has reportedly looked much more at home this pre-season and players can improve sharply in their second year of footy. If he gets back into the senior side despite the midfield depth that was added in the offseason we can assume he is better prepared and may be ready to outperform what should be a low starting salary.

North Melbourne possess one of the best taggers in the game in Ben Jacobs, but he has had many injuries over the past few years. When he is on the park he is a massive speed bump for the game’s elite midfielders, with the likes of Tom Mitchell, Patrick Cripps, Dustin Martin, Callan Ward and Joel Selwood all restricted to under 100 last season.

The obvious target for opposition taggers is Shaun Higgins and he received a hard tag on five occasions in 2018. He has learnt to deal with this part of the game quite well and averaged only 4 points less when being tagged than his overall season average. He is the class in the North midfield so expect him to remain the number one target and that will limit his upside, but if he continues to work through them he may end up being left alone.

North Melbourne was amazingly middle of the road across all positions in season 2018. They are not ranked in the top 5 for points conceded across any position or category we produce data on, nor were they in the bottom 5 for any either. So while we aren’t immediately looking to target specific players against North, we aren’t ever scared going against them either. 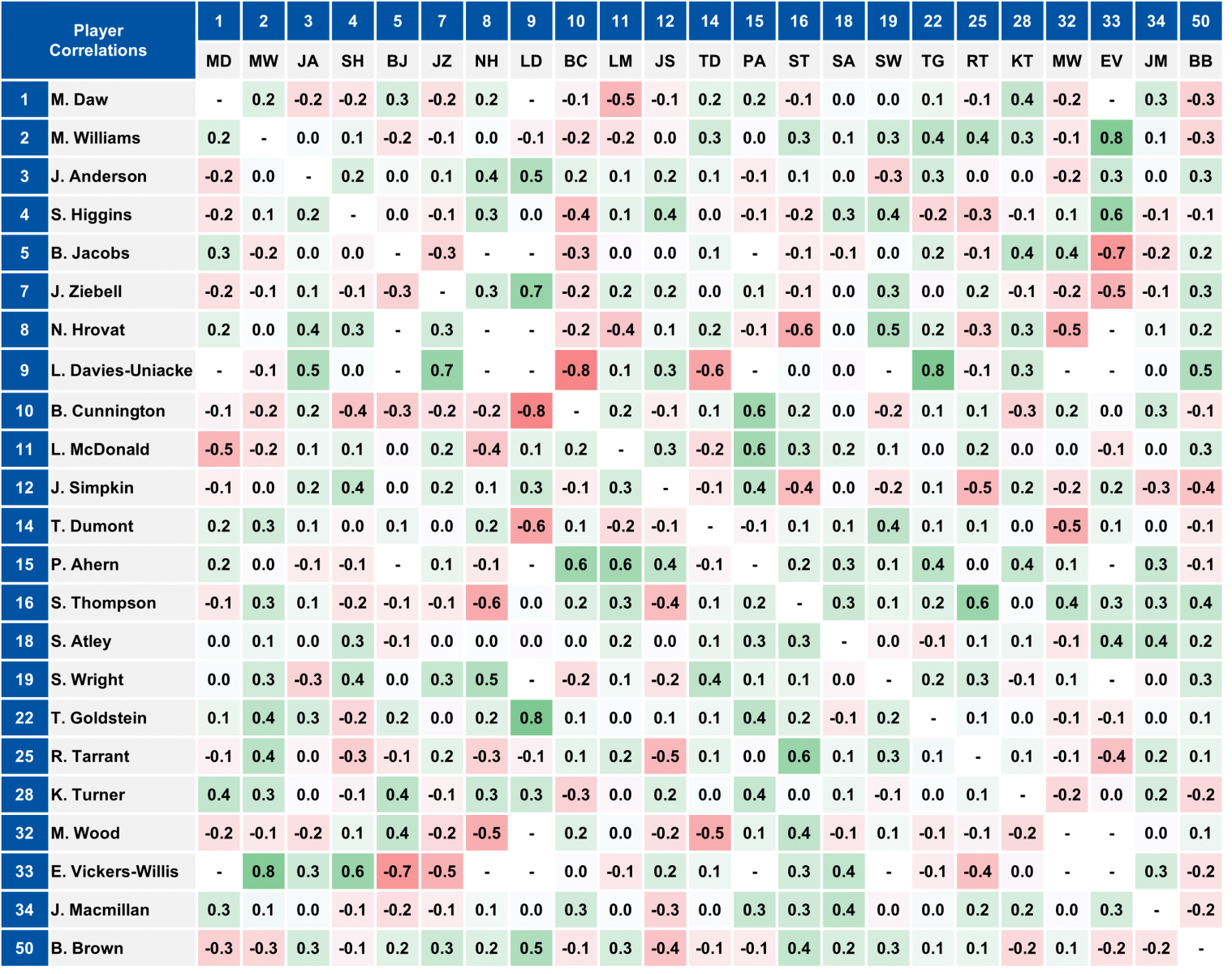 A number of the North Melbourne defenders correlate positively with each other but a link that particularly stands out is that between key pillars Scott Thompson and Robbie Tarrant, with a massive 0.6. Pairing a couple of North defenders together in your lineups looks a valid strategy to keep an eye on.

Ben Cunnington is interesting for those looking for a ‘lone ranger’ – apart from a strong positive correlation with fellow inside ball-winner Paul Ahern, he has no real link with the rest of his team. However he does have a significant negative correlation with fellow midfield gun Shaun Higgins, so that may be worth monitoring for your lineup builds.