Port Adelaide brought in a number of mature bodies last season but it didn’t pay off as they could only manage a 10th placed finish. They have swung the changes again this season with many players taking on different roles within the team and look to be one of the more interesting teams in the competition from a fantasy perspective. 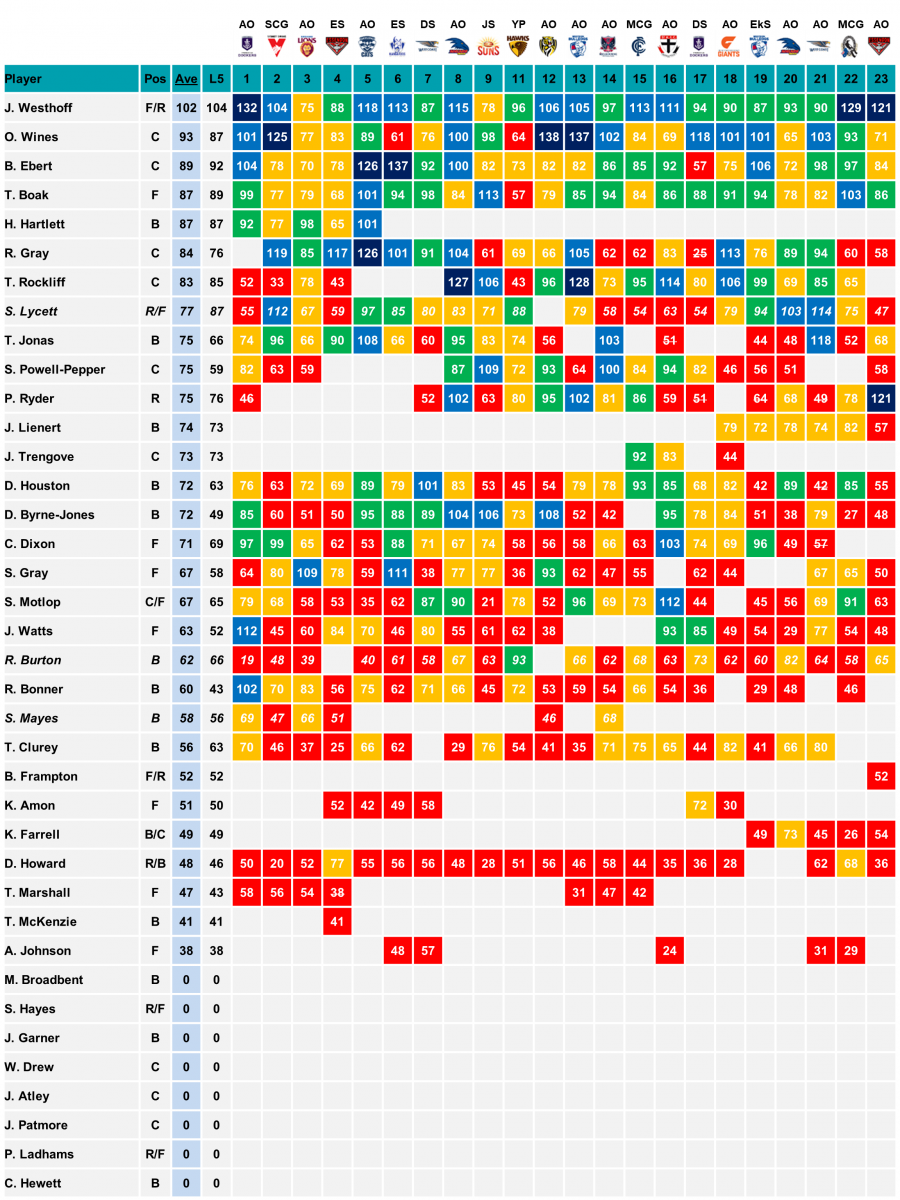 The Power lost a couple of big names during the offseason, with Jared Polec leaving to take a big offer from North Melbourne and All-Australian Chad Wingard leaving to play with Hawthorn. They also lost a number of depth players with names like Hombsch, Pittard and Neade leaving the club, opening up plenty of space on the list to infuse some youth.

Ryan Burton was acquired from Hawthorn in the Wingard deal and returns to his home state after a promising start to his career. From a fantasy perspective his 2018 season was disappointing however, averaging a mere 62 with only one score over 82. This may have been role-specific so keep an eye where he slots into the Power lineup as he has been trialled in a number of positions during the pre-season.

Premiership-winning ruckman Scott Lycett has joined the team from the West Coast Eagles as a free agent and provides much needed help for the injury-prone Paddy Ryder. Lycett averaged 77 last year and has shown an ability to play up forward so his combination with Ryder appeals as one of the better ruck duos in the competition if they can remain healthy. On the flip side, if they are to share the ruck role it will limit their scoring ability so watch closely to see how the duties are split.

Port brought home three very highly-rated kids from the 2018 draft in Connor Rozee, Zak Butters and Xavier Duursma and all three have shown plenty during the pre-season. Butters looks the most fantasy-friendly of the three but they all appear to be in the mix to play round 1 and present as value options early in the season.

Not many players have a fantasy history like Tom Rockliff but he had quite a disappointing 2018 in his first season at Port. He battled with a shoulder injury for much of the year and could only average 83 on the season – a far cry from his peak of 134.8 in 2014. He looked much fitter this pre-season and reminded everyone of his enormous upside with a score of 178 in JLT2. With Ollie Wines injured to start the season, the middle looks to be Rocky’s and he figures to be extremely popular at a reduced price.

Travis Boak is another player coming off a down year after spending a lot of time off a half-forward flank in an unfamiliar role, resulting in a season average of 87. Like Rockliff, this should result in a lower price tag to start the year, but the pre-season competition has seen much more midfield time for Boak as he looks set to resume his favoured inside midfield role. If that eventuates, he will have plenty of upside at his price with three-figure scores well within his grasp.

Port Adelaide didn’t do a lot of tagging last season, electing to use a hard tag on just four occasions, and they don’t have a set player to do the job. Brad Ebert, Tom Rockliff and Sam Powell-Pepper were all used in a defensive role with varying success.

Opposition teams didn’t often target the Power players for a hard tag but when they did, Ollie Wines and Robbie Gray appear the two players that are likely to receive close attention. Like most players, their scores suffer when tagged but Wines can be hard to get to considering he wins so much of his own ball, and Gray has the ability to push forward so taggers can struggle to have too much of an impact.

Port Adelaide covered themselves in glory last season when it came to fantasy, finishing the season as the hardest team in the competition to score points against. Even after an ordinary five rounds they gave up 10 points per game less than the premiers West Coast and a massive 180 points less than the Gold Coast Suns

While the Power were generally very good defending all positions, it was against backs and forward where they were at their best, leading the competition against both positions. While not league-best against the midfielders they were still stingy enough that you would try and avoid them where you could.

Where you could attack the Power last season was in the ruck. With Ryder fighting injury at different stages through the year, a dominant ruckman was more than capable of having their way with Justin Westhoff pinch-hitting at certain stages through the season. The addition of Lycett should make the Power harder to score against in the ruck but with both Lycett and Ryder susceptible to injury, it is important to be aware this is a position to target if they are out of the side. 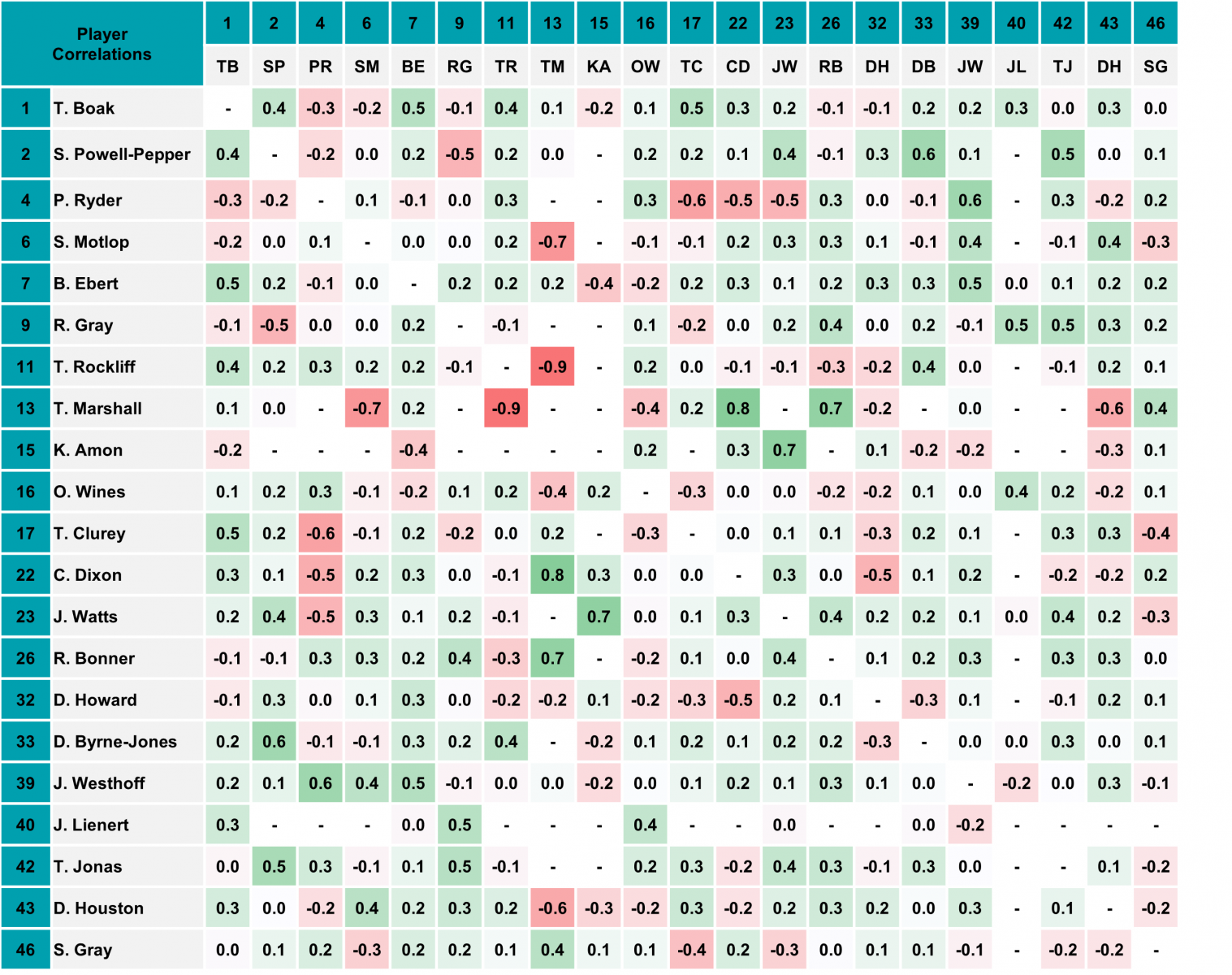 Interestingly the two value players mentioned above Rockliff and Boak also correlated nicely last season so playing both in the same lineup is a strong option. Boak also had a strong positive correlation with Brad Ebert but with Ebert shaping up to play a forward role in the pre-season, you would want to see a more fantasy-friendly role to pay much weight to that data.

The major negative correlation that stands out is that between Sam Powell-Pepper and Robbie Gray. This makes sense given Powell-Pepper’s game can suffer when Gray plays a significant midfield role, but he gets greater opportunity when they choose to play Gray as a permanent forward.