The reigning premiers, the West Coast Eagles, return for season 2019 with their list generally intact from last year’s success. Can they be the first team to win back to back flags since Hawthorn in 2015? 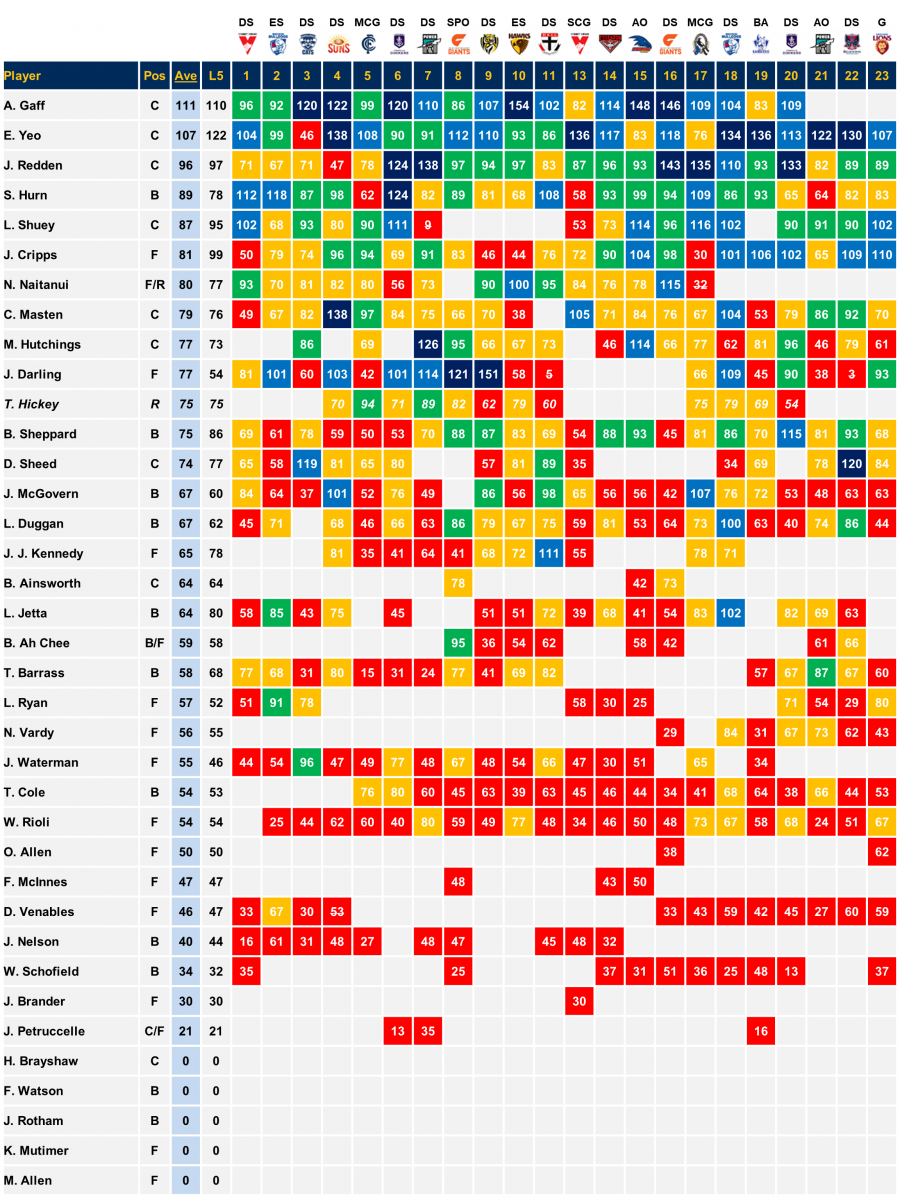 The Eagles have lost only two players of any note from their Premiership winning side. Ruckman Scott Lycett moved to Port Adelaide as a free agent, while veteran forward Mark LeCras decided to hang up the boots after a fantastic career.

The only mature-aged recruit they brought in was former St Kilda ruckman Tom Hickey. Hickey has struggled for form after looking promising in his younger days but did impress last season against Nic Naitanui and shapes as the obvious replacement for Lycett to join Nathan Vardy in the Eagles preferred shared ruck setup. Sharing the role will obviously limit his upside so there is doubt on whether he can improve on last season’s average of 75 points per game, and whether he remains in the side when Naitanui returns from his knee injury remains to be seen.

While the Eagles list is quite exposed given their settled nature, Grand Final hero Dom Sheed has put his hand up through the JLT series to say he may go to the next level. Off a 2018 average of just 73, he scored well over 100 in both pre-season matches and should get his opportunity early in the season with Gaff missing the first two games through suspension. He has promised a lot and may be ready to hit his fantasy straps.

Willie Rioli had a superb first season of senior footy playing predominantly as a small forward but his exposure in the midfield later in the season did not go unnoticed. His 2018 average was a lowly 54 but he stood out in JLT2 with a terrific 4 goal 19 possession game which resulted in 120 fantasy points. With LeCras retiring there is opportunity for Rioli to take on more responsibility and if he spends time through the midfield he will have upside at what should be a cheap salary.

West Coast used Mark Hutchings as a tagger a whopping 13 times last season with very good results as the opposition’s best midfielder only went above 100 on four occasions. He was used on both inside and outside types, having particular success against the latter where he kept players such as Shiel, Steven, Sidebottom, Sloane and Zorko under 80 fantasy points. Expect a similar role again this season and he has become a scary proposition.

West Coast has quite an even midfield but Luke Shuey was the most targeted player a tag, getting a job done on him four times through the year. Shuey only averaged 84 in those clashes, slightly below his season average of 87, but is generally happy to absorb the tag to release his midfield teammates.

The Eagles were especially stingy when it came to conceding fantasy points last season, ranking 2nd in the competition behind Port Adelaide. In general they were in the bottom half of points against across all positions so there was no one position they were vulnerable against.

The Eagles performance against opposition rucks was intriguing. They finished the season giving up the 3rd lowest number to opposition number 1 rucks at 78 per game, but that figure reflected their dominance before Naitanui succumbed to another knee injury. Notice the last 5 game average of 94 there when Naitanui wasn’t on the ground, which would have come in as the 7th highest in the competition.

The other area where the Eagles should be avoided where possible was the best three midfield scores. While in general they were around average in conceding scores to midfielders, they were the 2nd tightest team in the competition against the highest three scores for the opposition. This perhaps highlights their ability to dominate the ball when in possession and very few midfielders got hold of them last season. 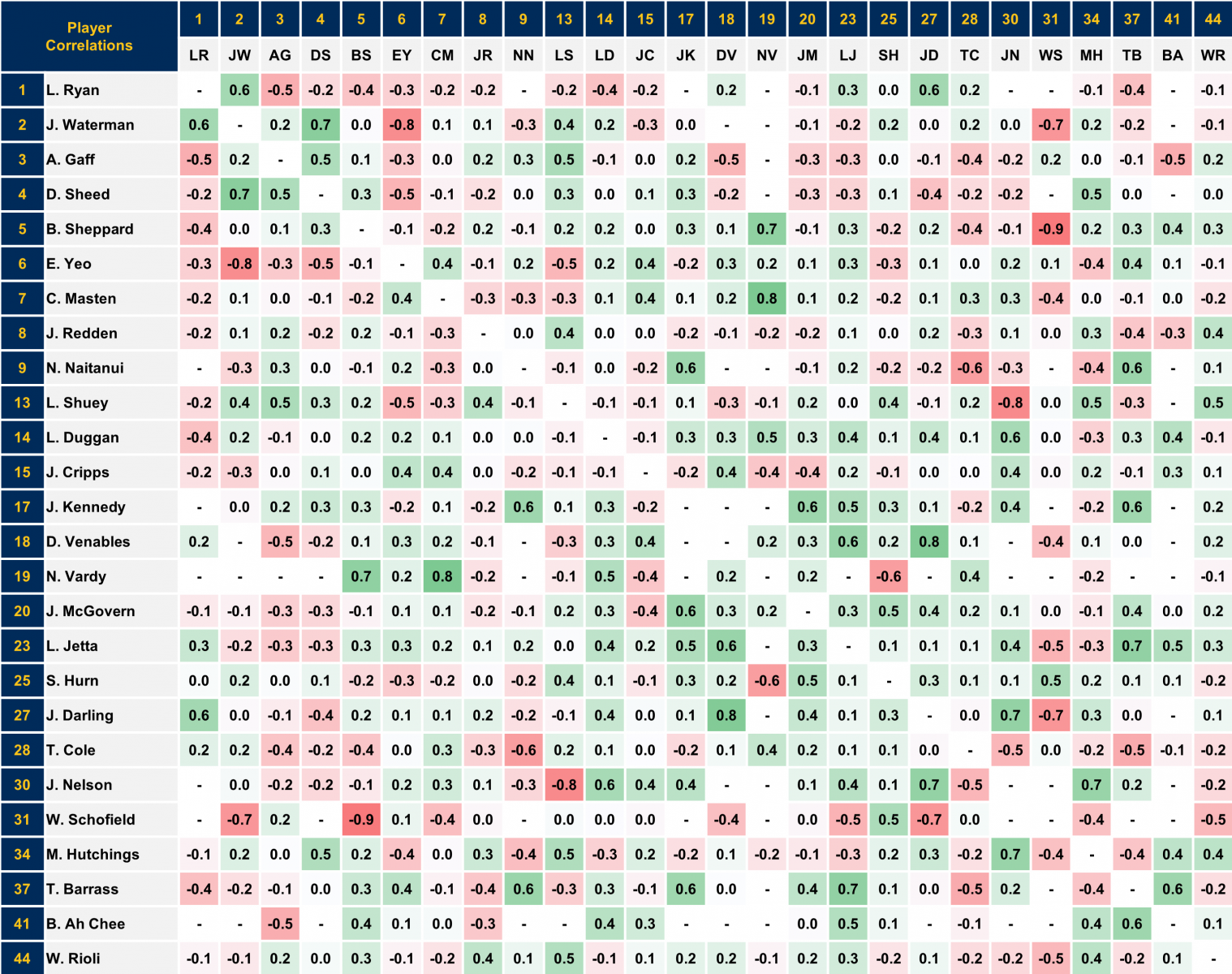 The majority of positive correlations in season 2018 for the Eagles were in the backline, with their strategy of maintaining the ball with kicking resulting in many links for their defenders. Tom Barrass, Jeremy McGovern and Lewis Jetta all correlate very well, while Brad Sheppard and Shannon Hurn also work well with certain players. Pairing up Eagles backs is a strong strategy and if you get the chance to play someone in a different position to get a group of 3 or more defenders in your lineup it can be worth it.

From a negative perspective, gun midfielder Elliott Yeo actually correlates strongly against Sheed, Shuey and Hutchings. This suggests Yeo can be a good player to use in stacks against the Eagles, or you need to be prepared when choosing which players to play with him.