The Western Bulldogs will continue to try and re-establish themselves in 2019 after a dramatic fall from grace since their 2016 premiership. The side is now almost unrecognisable from that fabled season and the focus will be on returning to finals after finishing 13th in 2018. 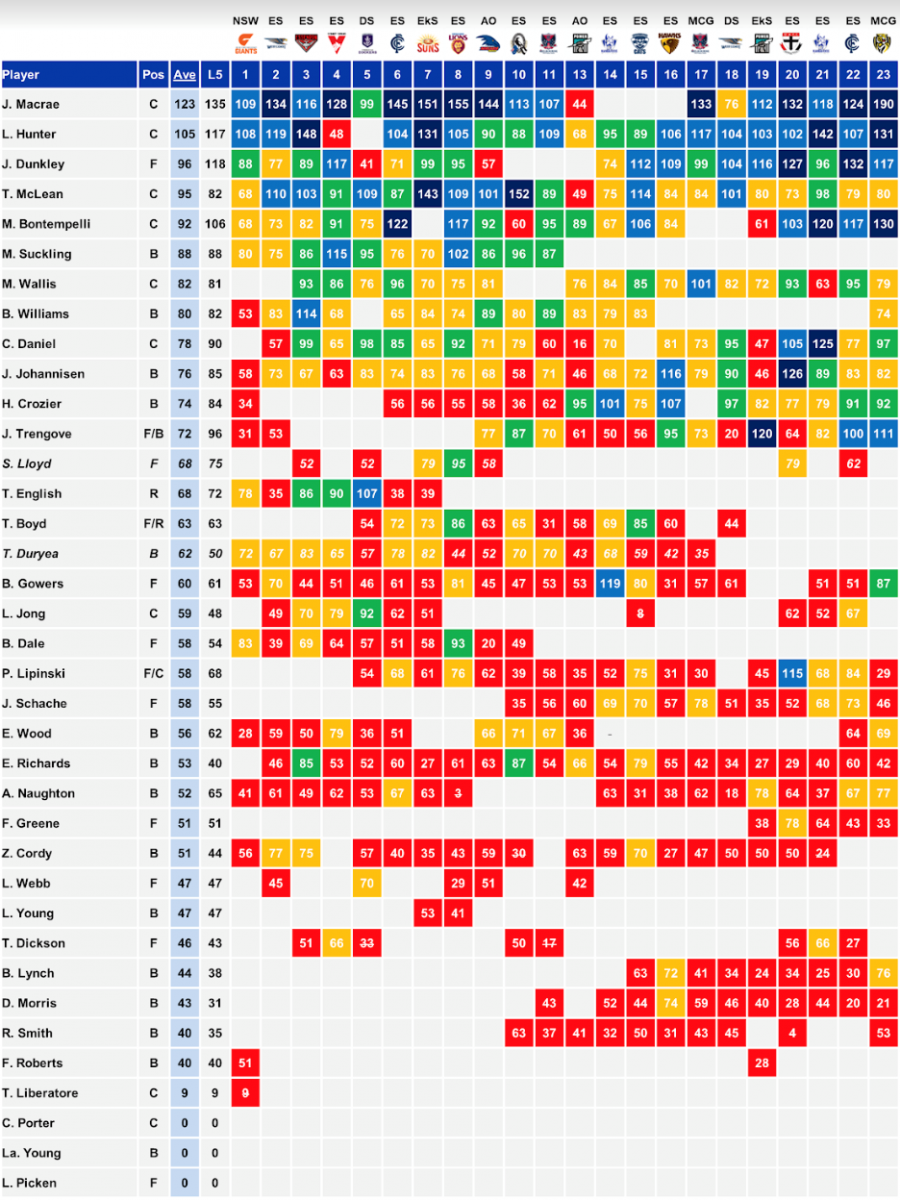 The Bulldogs biggest loss during the summer was Luke Dahlhaus who signed with Geelong. Dahlhaus was one of the key cogs in the 2016 premiership team, however like the team he had since faded averaging just 78.6 fantasy points in 2018. His role had become predominantly forward with rotations through the midfield.

The major addition in the off season was through draft where the Bulldogs selected Bailey Smith with the 7th pick. Smith has already impressed and is expected to debut in round 1, likely slotting into Dahlhaus role rotating between forward and midfield. As an under age player he was a ball magnet averaging 101 fantasy points in the NAB AFL U18 Championships and a massive 121 in the TAC Cup. He is certainly a candidate for rostering pending his price early in the season.

The Bulldogs will also see the return of Tom Liberatore from long term injury. Liberatore played just 1 game in 2018 but at his best he has averaged in the high 90s. There have been nothing but positive reports out of the Bulldogs on his preparation this pre season and through two JLT games he averaged 85.5 fantasy points from 74.5% game time. Liberatore’s biggest impact, however, will be on other Bulldogs as he takes up a position in the midfield. It looks like it will be primarily at the expense of Toby McLean who is expected to return to a role across the half forward flank.

As a result of the list changes above Tom English becomes an obvious value target early in the year. Monitor his role in the team to ensure he is playing as the number 1 ruck. English has flashed upside already in his career with three games of 86 fantasy points or higher from 7 games in 2018, including a top score of 107. In the second JLT match this year he racked up 54 points from just 45% game time.

Another interesting player to consider is Caleb Daniel. Daniel has been earmarked to play behind the ball across half back. This is a new role that he was experimented in to end last season. In the final four games where he was used as the plus one up back he averaged 101 fantasy points. He also racked up 32 disposals and 92 fantasy points in the Bulldogs first JLT game.

The Western Bulldogs utilised the tag sparingly in 2018 with a rotating cast of players. Across the four games they employed the tactic they held the targeted player to an average of 8.9 points below their season average.

On the Bulldogs side their highest scorer Jackson Macrae was targeted for a tag in just two matches. The tag had little impact on Macrae as he was still able to manage a 122 fantasy point average in these two games.

The Western Bulldogs were one of the top teams to target in 2018 conceding the fourth most points per game and the second most 100+ scores. The best position to attack them at was in the ruck where they gave up the most points in league to opposition number 1 rucks at a massive 100 points per game.

The Bulldogs were also vulnerable up forward where they gave up the second most points in the league. 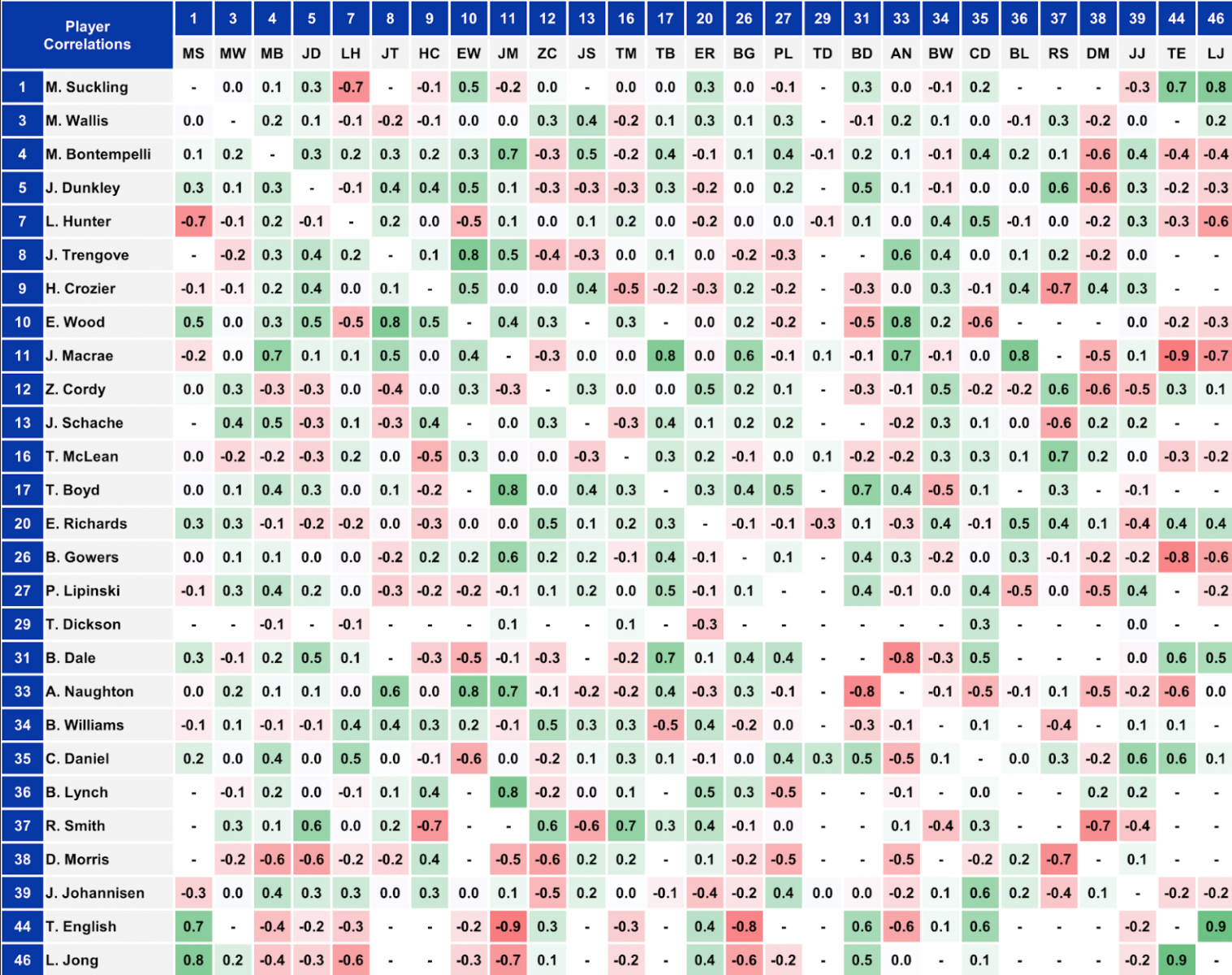 Two of the top stars on the Western Bulldogs in Jack Macrae and Marcus Bontempelli had a ridiculously strong correlation in 2018 at positive 0.7. This made for a great starting point in building Bulldogs stacks given the right matchup.