The second game of Semi Final Week for 2020 is set for Saturday night with a massive game between old Victorian foes Geelong and Collingwood. As always, the major platforms have us covered with a massive offering of daily fantasy contests to dive into:

There is a AFL qualifier to reach the DraftKings World Cup Team Australia side for this match! Click the banner below to enter into the contest to reach the side!

Perfect weather, not a spec of rain to be seen across Brisbane tomorrow. The heat will bring the usual dew come night time but beyond that we couldn't ask for better conditions in this matchup.

The backline is once again the position to target on this slat with Collingwood giving up the most points to the position this season. The gap grows when you isolate the top 3 scoring defenders with the Magpies giving up 74 points per game. This is ideal for the Cats who love to possess the ball across the half back and build their attack from here. It will be Cats backs stacks all the way in this game.

The ruck position has been the only real weakness of Geelong this year. They have given up the fewest fantasy points in the league overall, which limits the avenues to target against them. But in the ruck they have conceded the 5th most fantasy points in the league and it has been an ongoing revolving door of players lining up in the position. For this game it will be Rhys Stanley who will do his best against Grundy and his merry men in Darcy Cameron and Mason Cox chopping out.

It will be a war of possession in this matchup as we can see Collingwood and Geelong two of the top 3 teams in the league for disposals and also lead the way in uncontested possessions and marks. The team that can get on top here and control the ball will not only do a lot in terms of winning the game but will also certainly win the fantasy battle.

Going right back to Bews here. As noted last week he really benefits from the game style the Cats play and whilst he only managed 46 points last week in a loss. The Cats go in favourites in this matchup and have a far better matchup for defenders. Before last week's final he had just one game under 51 from his last 7 matches and posted 72 on two occasions during this stretch. I love linking him with other Cats defenders, including Tom Stewart who we will touch on below.

Going back to the well on Selwood too. Last week he managed 65 fantasy points, which didn't kill you at his price. But we have to remember that this was in a loss and he also copped a niggle during the game. He played exclusively through the midfield as expected attending 71% of the Cats centre bounces. The Magpies are an easier team to score on than Port Adelaide and Geelong are expected to win, which should easily be enough to see Selwood’s point total reach up to 70+.

Stewart will be my spend up back on this slate with his sporting a 100+ point upside. He has the best matchup in the league for a team that possesses the ball across half back more than any other team in the league (led all teams in uncontested marks in 2020). I will be linking him up with value plays such as Bews (or O’Connor).

Treloar didn’t quite translate his 25 possessions last week into a great fantasy score managing only 66 points. That said, I love his price point while everyone else jumps to get Taylor Adams fresh off a big score. It is unlikely that Treloar will have another zero-mark, 1 tackle game but we can be certain of his touches as he has pigged out all season in the short quarters. Love his price point, love his likely ownership on this slate.

Dangerfield still only saw 53% of center bounces last week. This is an elimination final so I expect this will go up if needed, and if it isn't required it will likely mean an easy win for the Cats, which bodes well for his time up forward. Despite splitting time forward last week in a loss he still managed 72 fantasy points. He has a massive record in finals games, and I expect in an elimination game he will be one of the best on the ground. 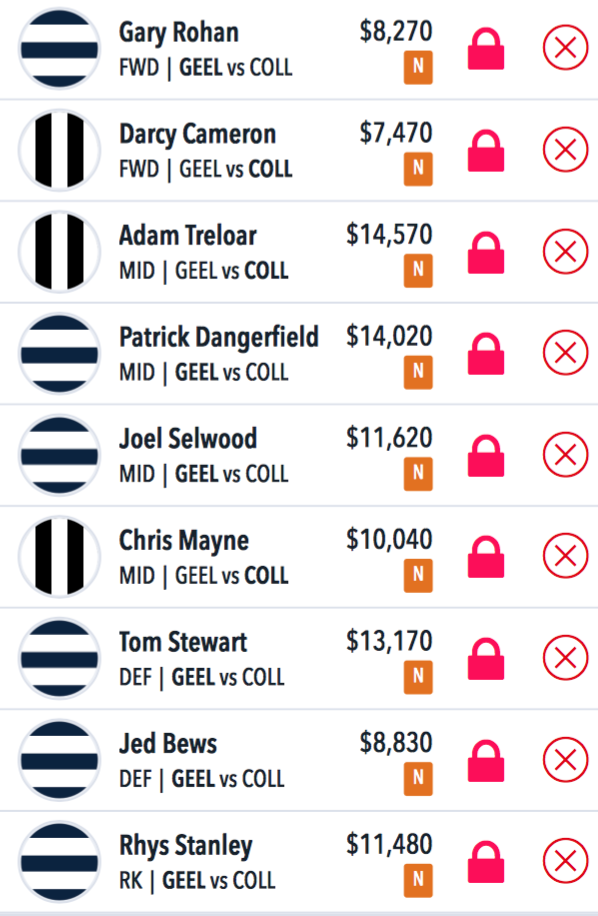 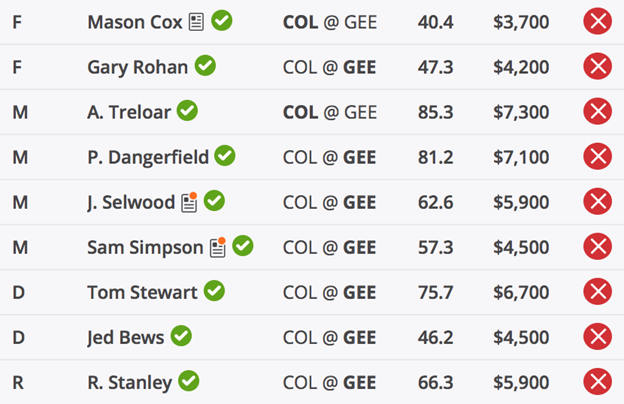