In what has been one of the most incredible seasons ever and not because of the football on field we have actually made it to the 2020 AFL Grand Final. The Richmond Tigers are back for their third grand final in four years and they will take on Geelong who have finally reached the final game during the Patrick Dangerfield era.

It is no shock that we are seeing the biggest daily fantasy contest of the season for the big game as Draftstars drop a $150K bomb as their main contest for the game. If the big GPPs aren't your thing you will still be covered by an enormous amount of games on offer:

For the first grand final away from the MCG and the first even night game for a grand final we can expect the typical slippery conditions we have seen all year during night games at the GABBA. There chance of showers and thunderstorms during the game which will add to those conditions if they eventuate. It should not bother either team as they have both been playing in Queensland all season now, and both sides adapt to the conditions well.

Geelong have been the hardest team to score against all season, conceding the fewest fantasy points in 2020. They love to possess the football while starving the opposition, they racked up the second most disposals in the league and the most uncontested marks by over 8 per game to the closest team.

On the other side the Tigers were around league average for fantasy points given up in 2020 and did not possess the ball to any great amount sitting just below the middle for disposals. They continued to employ the game style that has worked well for them in recent seasons, moving the ball forward fast and at all costs, using surges and knock ons and constantly attacking off the rebound.

What does all this mean for fantasy??? Richmond could very likely win but lose the fantasy battle. All signs point to Geelong stacks in the is matchups, with mixes of Tigers throughout.

Across the back line is typically where Richmond gives up the most fantasy points. Above league average overall, but when you isolate the top 3 scoring players they have given up the second most in the league this season at 72 points per game. This is perfect for the Cats who love to control the ball across half back and slowly build up their attack with precision kicking. Stacking up Cats backs will be the order of the day!

As the season draws to a close the Tigers will once again finish as the team giving up the most points to rucks. They have leapt past Tim English and the Bulldogs (which is amazing considering they were rucking with Josh Dunkley through large parts of the season). The Tigers have given up 76 points per game to the opposition's number ruck and this has exploded to 90 per game over the last 5. The Cats are never the easiest selection for ruckman (you can see they give up the 5th most hit outs in the league), however consideration has to be given to Rhys Stanley or Mark Blicavs as plays on this slate.

These two sides played in Round 17 in what was a big contest for the final ladder positions. In that matchup Richmond dominated the match winning 57-31 and notching up 22 scoring shots to 11. The game held true to the breakdown provided above as well with Geelong having the top 5 fantasy scorers despite Richmond winning comfortably. Backman Tom Stewart (91 points) and Mark O’Connor (83 points) were among the top scorers, highlighting where you can expect the points to come from.

The teams will have some change since then with Joel Selwood back for the Cats, while Dion Prestia and Shane Edwards are back for the Tigers. Each of these players will play a substantial role through the midfield and we have seen Shai Bolton (Richmond’s third highest scorer last game against Geelong) all but totally relegated to a role up forward as a result.

One of my favourite GPP plays each week for the Cats this season. He often draws a more of a lock down role on the oppositions best small (will likely draw Rioli in this game, which should bring him up to the ball more), but just being in that Geelong back line gives him the opportunity to rack up uncontested possessions and he brings an upside few players at this price point do in this game (top score of 102 this season and had 83 against the Tigers earlier in the year). You can link up O’Connor with any other Geelong back or alternatively Jack Henry and Jake Kolodjashnij offer alternatives at similar prices.

A clear build structure is to load up on Cats backs and midfielders while playing Tigers forwards if you expect Richmond to win the game. I love finding some value here from the Tigers (given value is always difficult to find in big finals) in Castagna or Riewoldt. Both offer upside for winning big GPPs, this is likely as cheap as Castanga has been all season, and Riewoldt kicked 4 goals against the Cats earlier in the season.

I expect Toby Nankervis to be the highest owned ruck on this slate. He has more certain ruck minutes with no legitimate backup providing chop out and he is fresh of a 100+ point game in a game where he was the highest owned ruck against Scott Lycett. So, this is more of a contrarian play. Stanley attended 95% of the center bounces last week but does push forward at times after the ruck contest. That said, as we broke down above, he has the best matchup in the league for his position against Nankervis and the Tigers. He should be able to fill up around the ground and as a result looks like a great play where you can pick up lower ownership.

Edwards at this price point while playing around 50% of time through the midfield is an easy play for me. You have to pick and choose your spots for the Tigers plays given their lack of fantasy scoring, but we saw against the Saints what he is capable of with a 79-point game.

Selwood attended 90% of centre bounces last week against the Lions and posted his second straight 83-point game. There is no way he is going to be backing the pedal off in the grand final so we can expect another full throttle performance in the middle. I have tipped in each of the last 2 finals and he has delivered in spades so there is no reason to stop now considering his price is still yet to move. The Tigers typically have not won the contested ball around the center bounce and stoppages, which will give Selwood the opportunity to maximise his most natural skill.

If you are looking for an alternative to the Geelong stacked backline I would be sticking Houli in the back line. He has a tremendous finals record and is priced exceptionally well considering he posted a 100+ point game just two weeks ago in an elimination final.

This is a lock and load premium play for me in this matchup. It is well exposed the Tigers form against backs from a fantasy perspective and I broke down in detail this and the possible game script that will help Stewart’s case. The last matchup he had against a team that gave up points to defenders was two weeks ago against the Magpies where he posted 110 in an elimination final. I will be linking him up with value Cats backs to help balance out the salary impact.

This is Martin’s opportunity to go from bona fide superstar to immortality if he can turn it on and take home his third Norm Smith medal. You can certainly bet he will be up for the challenge. Throughout the finals series we have seen his centre bounce numbers hold strong with him pushing forward after the stoppages (in contrast to Dangerfield who is now predominantly playing a full forward role for the Cats). The Tigers will also tend to push Martin up the ground more if they are getting beaten around the contest. When these two sides met earlier in the season Martin was the Tigers second highest fantasy scorer with 76 points despite kicking 0 goals 3 behinds. You can bet he won’t let those opportunities slip on the biggest stage.

Duncan is the sneaky premium play here. With Dangerfield moved forward on a pretty permanent basis it has been Duncan who has stepped up and taken on a greater role of inside midfielder. He has attended over 70% of the centre bounces over the last two finals games (and over 50% in the first final). Through the final series he has averaged 102 fantasy points and as a result has ended up the most expensive player on the slate. Given his price and the fact he is typically known as an outside player I expect there to be a chance he is somewhat overlooked in this game, however there is a very real chance he tops the slate for fantasy points.

Have you tried “Gimme Five” on SportChamps? Australia’s Number 1 Tournament Betting platform have laid down the challenge to correctly pick 5 out of 10 (new for the Grand Final) selections for tonight’s game. Do you think Smatho has this one right? Play SportChamps now and look out for this contest in the AFL tab. 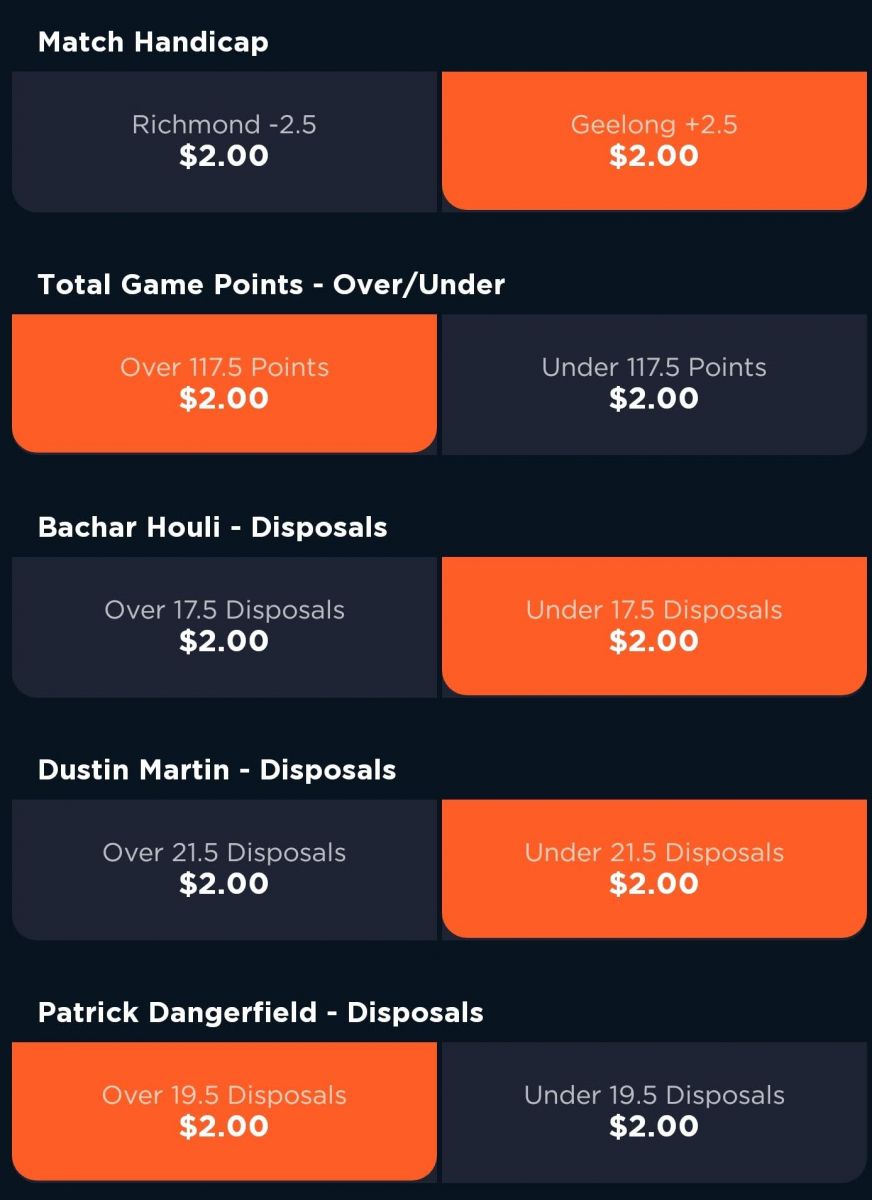 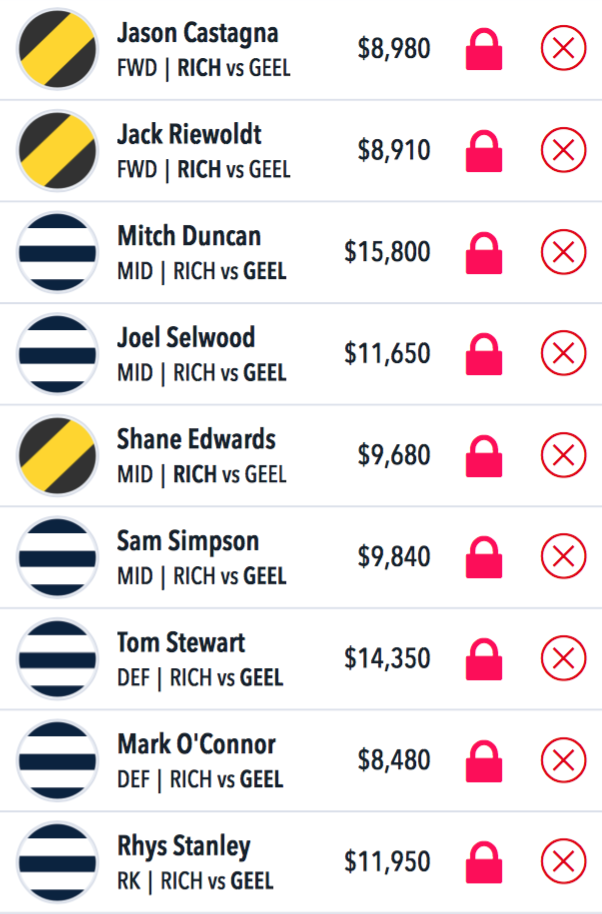 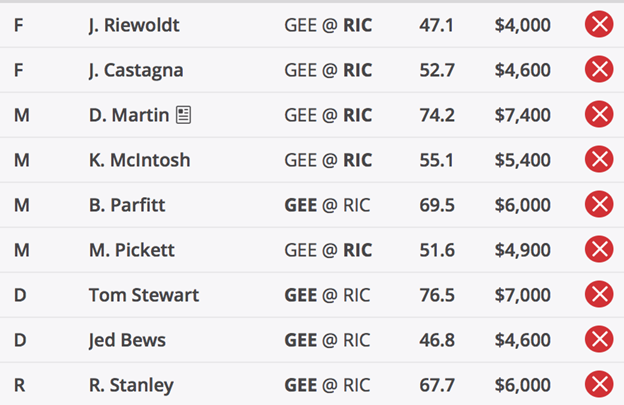