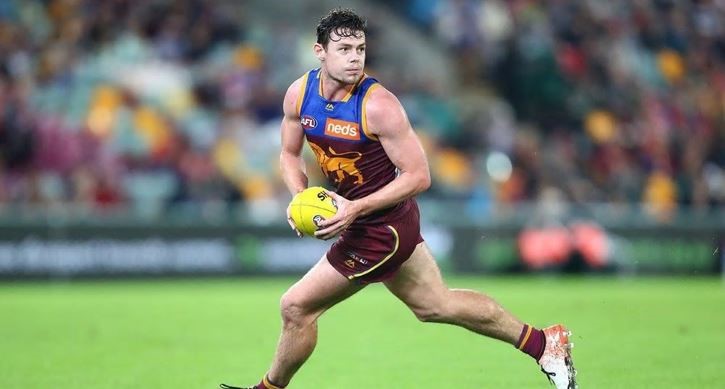 The second game of the prelim weekend as we see who will make the 2020 AFL Grand Final. Brisbane will host Geelong up at the GABBA in what should be a cracking contest. No surprise for such a big game the daily fantasy platforms are offering such a wide range of monster fantasy contests:

Totally dry day from a weather perspective with not a spec of rain expected. The only challenge will be the usual dew we can expect from a night game at the GABBA after a 29 degree day. Conditions should be slightly slippery, which should suit the Lions game style slightly over the Cats who prefer to possess the ball.

Good luck finding an avenue to attack in this matchup between two of the hardest teams in the league to score fantasy points against this season (Geelong conceded the fewest points, Brisbane second fewest).

The one position where there is an advantage is at the ruck. Geelong have rotated through the rucks all season and will once again split the duties between Rhys Stanley and Mark Blicavs, both of who can leak points to opponents. On the season the Cats have given up the 5th most points to the position and get well beaten in the hit outs especially conceding 32 per game.

From a scoring perspective Geelong love to dominate the ball. They have racked up the second most possessions in the league this year and they do it through setting up their uncontested marking game, with 76 per game, which is 8 per game more than the next highest. This means that the Cats could lose the game but still win the fantasy battle when you contrast things with the Lions who have accumulated the third fewest possessions in the league this year.

After last week we are hard pressed to find value from Cats backs because they all filled up while demolishing the Magpies. They all love to rack up uncontested across half back and so on a typical finals matchup that is totally void of value this position presents one of the best opportunities to find some salary savings. Henry has looked to be in positions from the ball transitions across half back through the finals posting 52 and 62 from two finals games (which would certainly be enough at his price point on this slate. Mark O’Connor and Jake Kolodjashnij at similar prices also present solid alternatives.

On the other side I like Lester who loves to find cheap pill across the back line. He has the capability when doing that to rack up 30+ point quarters, which will be half the battle in this game. In the first final he posted 57 fantasy points against the Tigers, which against would likely be a solid score in this game.

The Big O has really staked his claim as the number 1 ruckman for the Lions despite Stefan Martin still being in the lineup as a chop out. McInerney has been absolutely sensational to finish the season and he stood up in the first final against the Tigers, dominating the matchup and posting a season high 92 fantasy points. As you can see he was their got to in the centre bounces attending around 3/4s. He has another elite matchup in this contest against the Cats as noted above.

As expected Selwood stood up for us in last week’s final posting a 83 point game while sitting off most of the last quarter in a blowout. We can expect this to be a much closer contest and therefore unlikely Selwood will be on the pine in the 4th quarter. He attended 79% of the centre bounces and will essentially play 100% of his game time through the midfield in this contest. Ever the big game player at his price point he is a total lock for me on this slate.

We are going to have to find plenty of solid options through the mid-tier pricing and for me Jarrod Berry stands out with a solid upside and a player who has been looking extremely likely through the second half of the season. Posting a 76-point game in the first final if he can replicate that in any form he should be able to return value at this price point. An alternative is Mitch Robinson who is a little cheaper and certainly has a game style that suits a cutthroat preliminary final game.

Totally burnt us in the first week of the finals, not managing to register a disposal in the first quarter and going on with just a 64-point game. I am more than prepared to back over this play. At home, in a big final, fresh off a mediocre performance I think we will see the absolute very best from Neale in this matchup. His price is reasonable for averaging a shade under 100 points per game this season in short quarters. Earlier in the season Neale top scored for the Lions in a loss with 98 fantasy points. 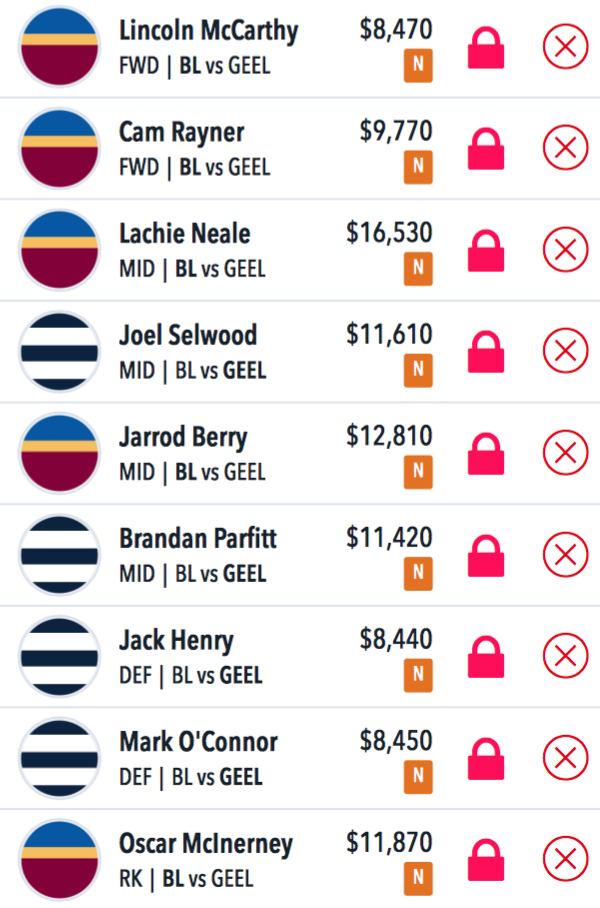 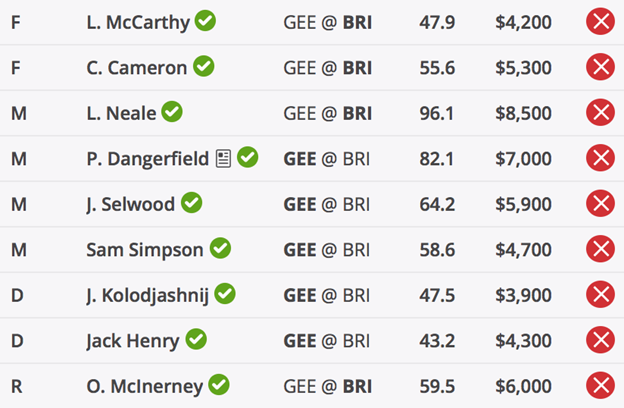