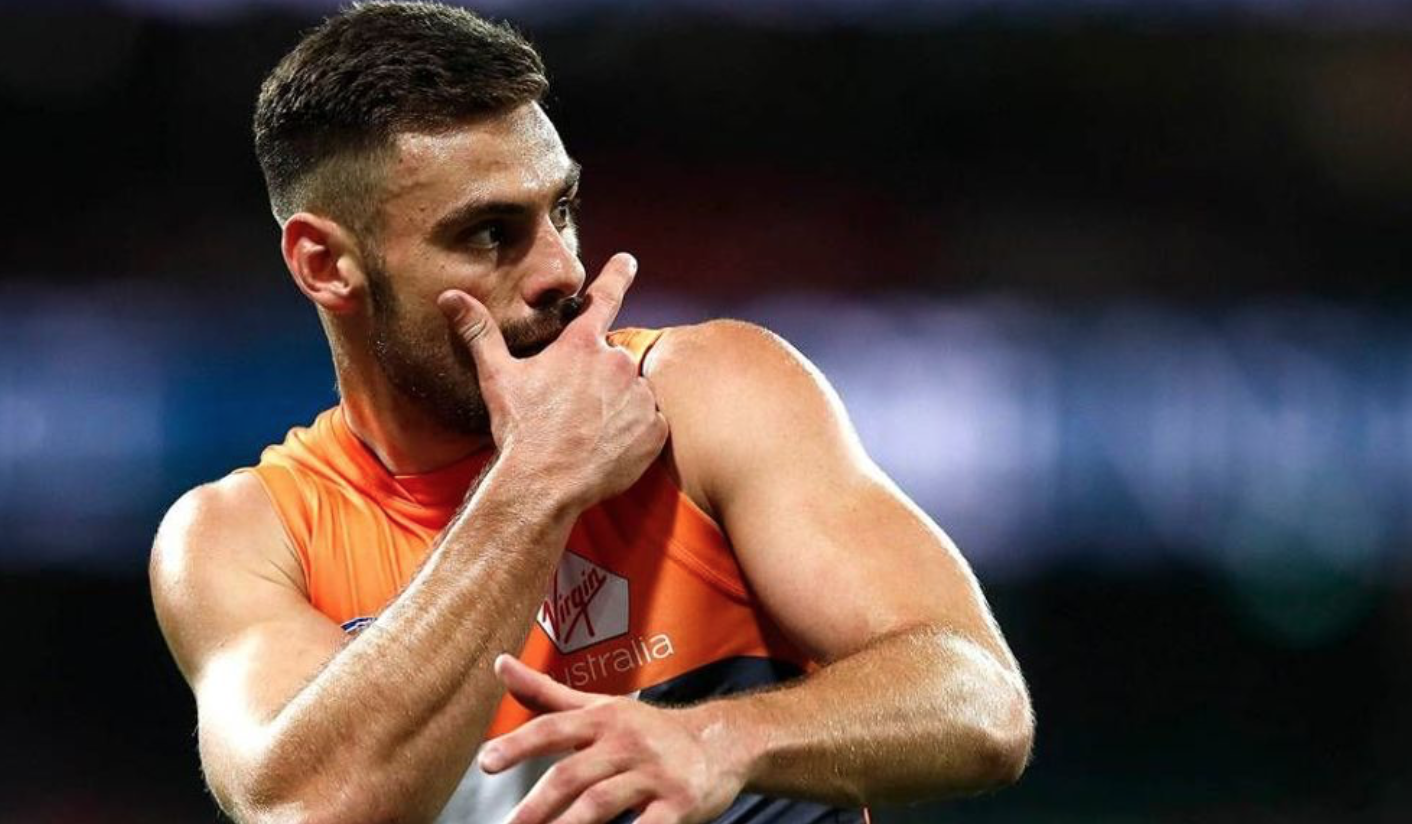 Here we are at our 10th straight day of footy and we close out Round 10 with a matchup between Essendon and GWS. Don’t worry though, because we roll straight into Round 11 the very next day! The daily fantasy platforms have us covered for this edition of Friday night football with a number of massive contests: 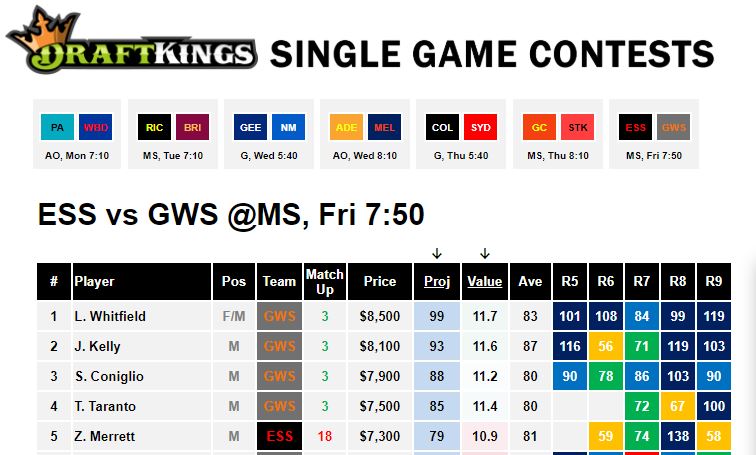 More rain to combat on the Gold Coast tomorrow night with the forecast expecting up to 10mm around game time. As always this should boost rucks scores as more stoppages are created, and inside players who like to tackle should also receive an increase in fantasy scoring.

No surprise given the numbers above that Essendon are giving up points to midfielders. They have conceded the third most points in the league to the position and this holds true when looking at the top three average scorers from the positions who they are conceded a massive 91 points per game to.

This will be an interesting matchup in the ruck with Essendon giving up the most points in the league to the position this year (81 points per game to the number 1 ruckman). However, Sam Draper has taken over duties from Tom Bellchambers this week and he is likely going to be the play given his low price (posted 55 points last week despite splitting the role with Bellchambers).

It is a rare situation where the two chop out ruckman are priced higher than the first rucks on Draftstars, but that is the situation we find ourselves in on this slate. As noted above Draper on debut posted 55 points, while sharing the ruck role with Tom Bellchambers. This indicates he is pretty much a lock and load play at his price on this slate. For context, his opponent Shane Mumford has not scored 55 points all season.

This kid has waited a long time to debut (over two full seasons), however he will come into play on this slate at the minimum price. His natural position is a midfielder, which means he may see a very small rotation through there (especially if rumours are true and Josh Kelly is a late out). But effectively he can also play as a forward and he will likely replace Toby Greene. He has a nose for the football averaging over 20 disposals and 4 tackles in the NEALF in 2019.

Hopper finally broke through to show everyone that ceiling game last week with 107 fantasy points. He continues to be their mainstay on the inside (16 centre bounce attendances last week) and I love his game style if the rain comes (averaging over 4 clearances and 4 tackles per game). As we noted above this is an elite spot for midfielders going against Essendon, particularly those that don’t rely on uncontested marking to score.

Both are solid plays (in either the wet or the dry). Parish has been spending more time in the midfield lately attending 9 centre bounces last week (the third most of any Bomber midfielder). This has resulted in a boost to his fantasy scoring posting 4 straight games of 60+ (including 2 games over 70). Meanwhile Snelling has also the ability to hit a GPP winning score with two games of 82+ in his last four. He would also revel in the wet conditions if they strike as a tackling machine who 6 or more tackles in 4 of his last 5 games (including an 11 tackle performance against Adelaide).

Coniglio attended the second most center bounces last week for any Giant midfielder not named Hopper (with 11 CBAs). It looks like his role has been recemented in the midfield after being thrown forward for plenty of time earlier in the year. This should be even more the case if Kelly ends up as a late out. As I noted above a matchup against Essendon is one of the best in the league for midfielders and Coniglio is an inside beast who would thrive in the wet conditions if they arrive as forecast. 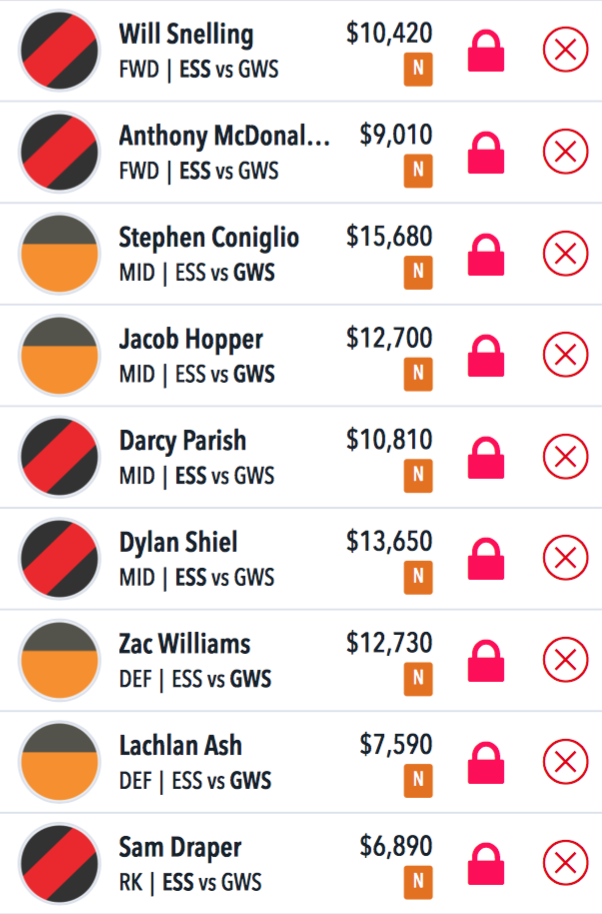 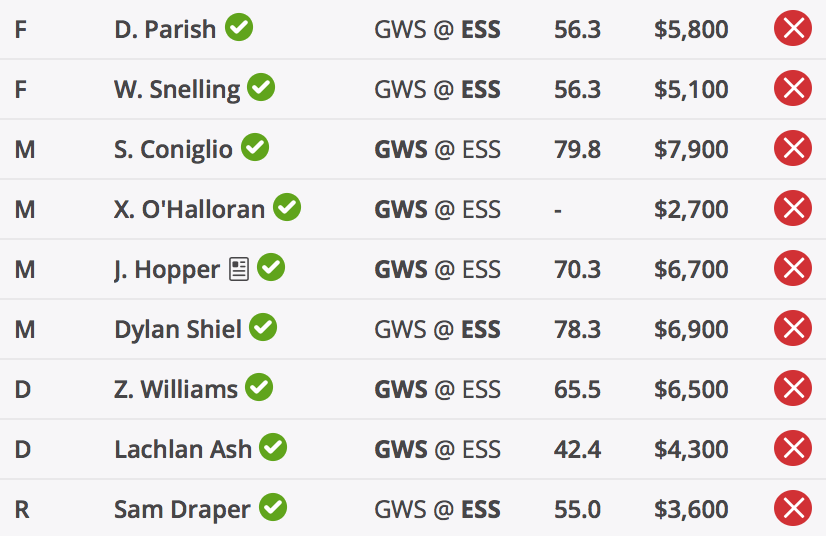