How are we all enjoying the footy festival? Tonight is peak strangeness with two games on a Wednesday night, and I for one am all in for this one. Okay, so these are not exactly blockbusters, but there is also plenty of potential for a couple of upsets from teams that should be absolutely desperate for a win. There are some great fantasy contests up for Draftstars and DraftKings including: 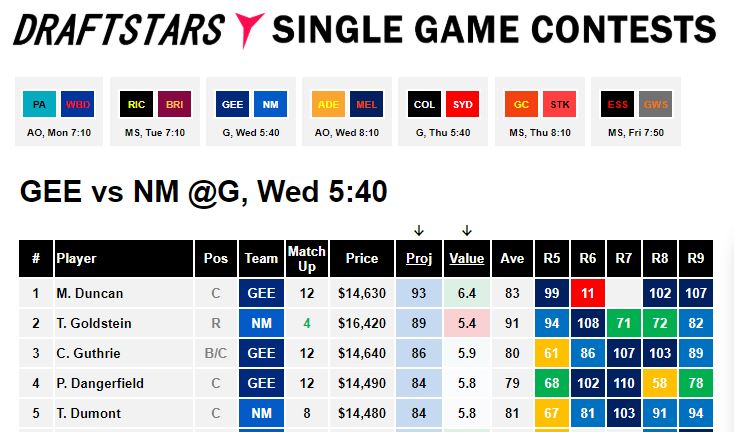 The weather looks good for both games, so we can expect some fairly open footy and good scoring opportunities for nearly everyone. With a ridiculous 21 changes for the four teams, there should be plenty of opportunities to identify some new roles and better scoring opportunities. I don’t know much about some of the debutantes coming in, so I’ll be ignoring them for now.

The first game features two stingy teams, with Geelong in particular able to limit fantasy scoring. They do this by limiting uncontested possession and marks more than any other team, so we need to look to North’s inside brigade if playing any at all. North are also reasonably good at this, and the potential for a dewy Brisbane evening only adds to the idea of targeting contested beasts in this game. One area where Geelong do concede points is in the ruck, while North have been the 3rd easiest opponent for forwards.

The later game presents as a buffet of fantasy goodness, with the two leakiest teams in the league. Adelaide leads by a mile in total points conceded, and are also well ahead in conceding 80+ scores with nearly 5 per game. Melbourne is a little tighter in this regard with only 3.3 per game in their last 5. Both teams are great targets all over the ground, except for being difficult opponents in the ruck. Backs against Melbourne is the only area to be wary of with one of the lowest floors in the league.

FWD: Chayce Jones $6,890 DS / $3,300 DK continues to get a big role in the CBAs, and continues to score poorly. Even with eight team changes, it’s likely he gets the role again. At this point it is not a safe play at all, but hopefully enough people have given up on him that we can catch a big score at low ownership in a good matchup. Tom Sparrow $6,460 / $3,400 is a little cheaper option with an okay chance of 10+ CBAs also, but perhaps higher ownership due to the easy matchup. Other Melbourne players who could relish the easy matchup are Sam Weideman $7,020 / $3,800, Harley Bennell $7,500 / $3,900 and Jake Melksham $8,170 / $4,500. All three could easily get on the end of several goals and give us a slate winning score, so sprinkle them through your lineups.

Those are all good options from the lower end of the price range, but if you have a little extra salary I like taking a punt on Jack Steven $10,740 / $5,600. He was scoring just fine with 60+ scores before taking a break, but at his price tonight we’re looking for an 80. With Parfitt and Constable out there is room for him to play some decent time in the middle and we know what kind of ceiling he has if his fitness has improved at all with the time off.

DEF: Norths defenders scored at will against Adelaide last week, and this week it’s Melbournes turn. You can consider all of their players, with Christian Salem $11,510 / $5,700 the safest scorer in his distributing role, but also the most expensive. I like the chances of Jake Lever $7,640 / $3,900 getting plenty of +6 action and crossing the 60 point barrier for the first time this season in a revenge matchup, more than enough at his price. On the opposition Brodie Smith $13,330 / $6,800 has been getting some tagging attention recently, but if he can escape that this week he has the ability to cross the 100 point barrier in his midfield role.

Cam Guthrie $14,640 / $7,100 (Mid only on DK)  is the most expensive option on the slate, which might be enough to keep ownership low. He’s had an amazing inside midfield role in recent weeks, which is perfect in this game. I’m not afraid to go to him again despite the elevated price, and try to catch a slate breaking score.

RUCK: This seems very clear cut. North Melbourne, Melbourne and Adelaide are all difficult opponents with some of the best ruckman in the AFL, so Todd Goldstein $16,420 / $8,200 against the returning Rhys Stanley $11,050 / $5,500 should be the safest play. If I wanted to do anything funky, it would be Luke Jackson $5,880 / $3,200 in the softest possible matchup as a forward, and having already shown a ceiling of 60. Be warned, his floor is really bad.

Final Word: The logical play is to carefully select around three strong options from the early game, and then bring it home with a stack from the softer late game. That could be an Adelaide stack for all I know, these are two very average teams. I also don’t write off the possibility that Geelong blows North away and has several worthy DFS plays of their own. Good Luck! 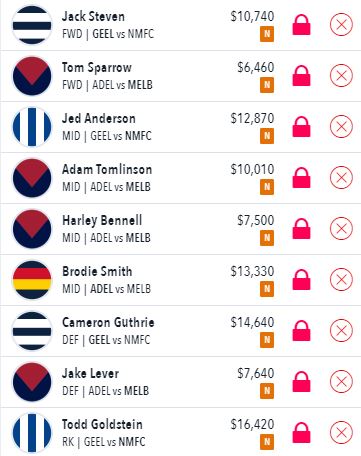 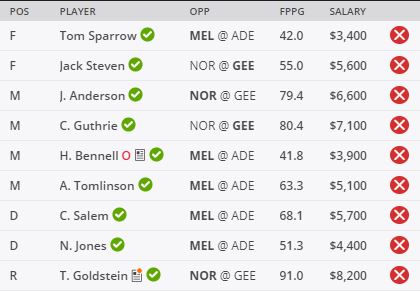