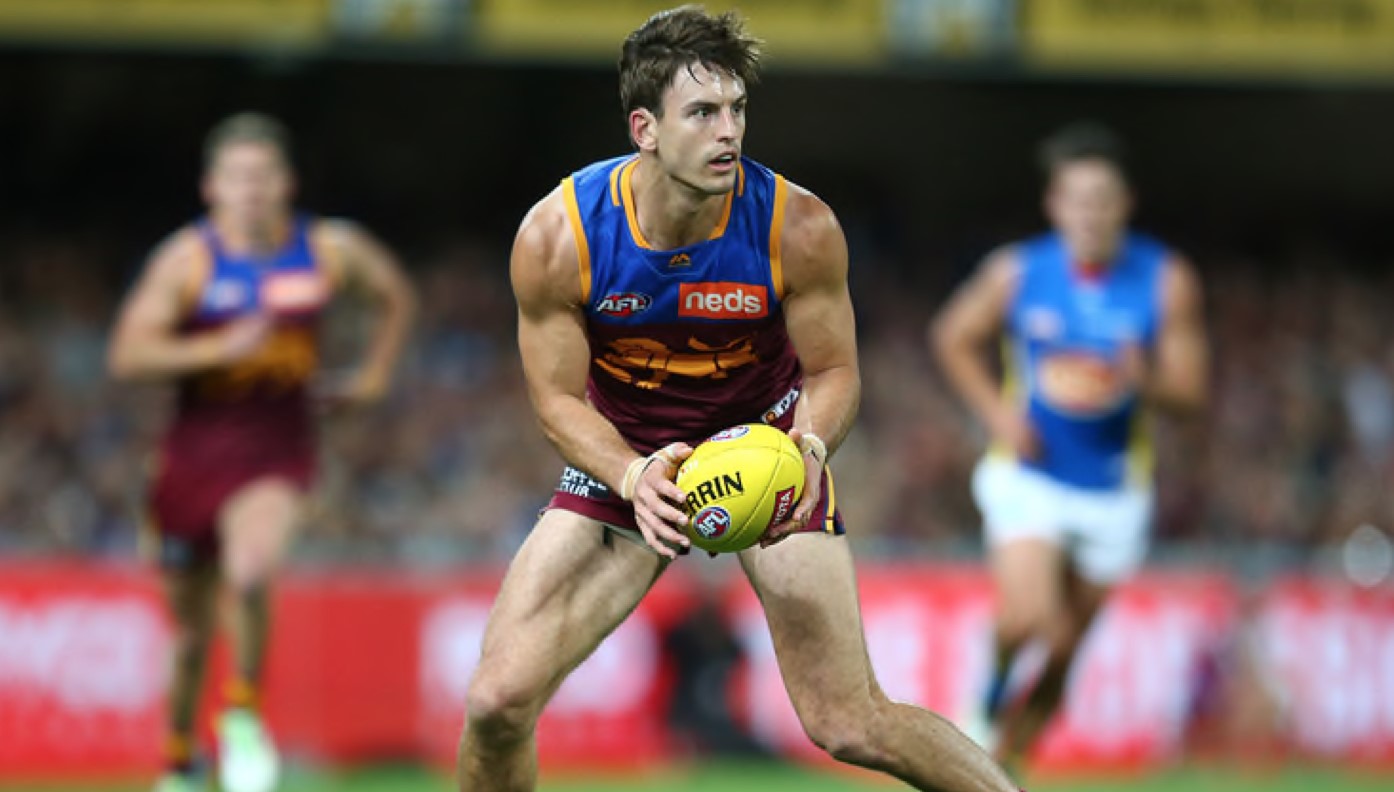 Round 10 ends but there is no end in sight as we move right into Round 11 for a double header Saturday slate of AFL football. The major platforms continue to provide us with a wide range of massive DFS contests: 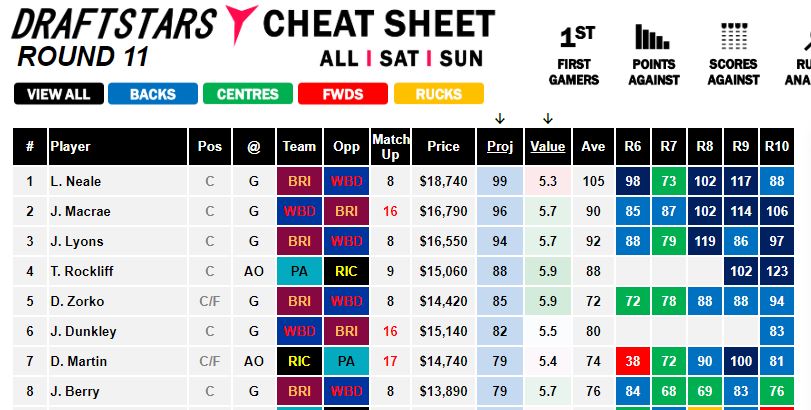 Little drizzles expected at both locations tomorrow, which will be worth monitoring. However, it is likely to come during the morning/day rather than the late afternoon to night time when the game kick off so it should be good conditions for football.

The slate looks relatively tough in that no team gives up significant points to any position. When it comes to defenders it has been an area to target Richmond historically and they are still giving more than league average slightly. The Western Bulldogs are also giving up just above league average at this position.

The bulldogs are the team to target through the midfield, which is a juicy proposition in this matchup against the Lions. We can go to the old favourite Brisbane midfield stack here, particularly playing at home and almost 3 goal favourites.

Richmond stand out as the team to target in the ruck, which has been the cast going on 3 years now. They give up 77 points per game to the opponent’s number 1 ruckman (77 points per game), however unfortunately we are faced with Port Adelaide playing a dual ruck setup. Tim English is the other person to target on this slate. He is not far behind the Tigers giving up 75 points per game.

Value is very light on for this slate, which means we really need to dig deep to find some opportunities (especially for GPPs). Stack is playing a half forward role this year and he had his best game of the season last week against the Lions posting 51 fantasy point (which is a solid return at this price point). Meanwhile, Ross should get more midfield opportunity with Trent Cotchin being rested again, which we saw two weeks ago where he posted 60 fantasy points and attended 67% of the center bounces.

Our only minimum price player is Eagles for the Lions. Not usually the prototype we would be drooling over for daily fantasy but again the options are limited. Eagles has found the football at NEAFL level in this role averaging over 12 disposals and 4 marks per game. The Western Bulldogs do concede above average points to defenders and I would be looking to link Eagles up with other Lions backs to take advantage of any link up play across half back.

As noted above this is quite a difficult slate for rucks with Port Adelaide muddying the waters and having a dual setup. I will be going back to the Big O who didn’t let us down last week as he took apart Ivan Soldo to the tune of 74 fantasy points. On this slate he draws Tim English who he should be able to overpower in the ruck contests.

Gray has sneakily seen an increase in midfield time recently as Dan Houston moved back to defense and fellow forward Connor Rozee has been apparently sacked from the centre square. Two weeks ago, Gray was in 75% of the center bounces and last week that appeared to continue (numbers yet to be released). He posted 68 fantasy points last week and given there is no obvious team changes that we can expect to impact this role I quite like going back to this play.

I continue to maintain that Lyons has one of the safest floors going round these days, rarely, if ever, dipping below that 80 point mark (86+ in 5 of his last 6 games). Even when it looks like he may be in for a poor performance (like the last two weeks) he manages to junk his way to a respectable score. He is a mainstay in the centre alongside Lachie Neale for the Lions and will be the centre piece to my Lions stacks in this matchup against the Dogs. As noted above it is one of the top matchups for midfielders in the league this year. 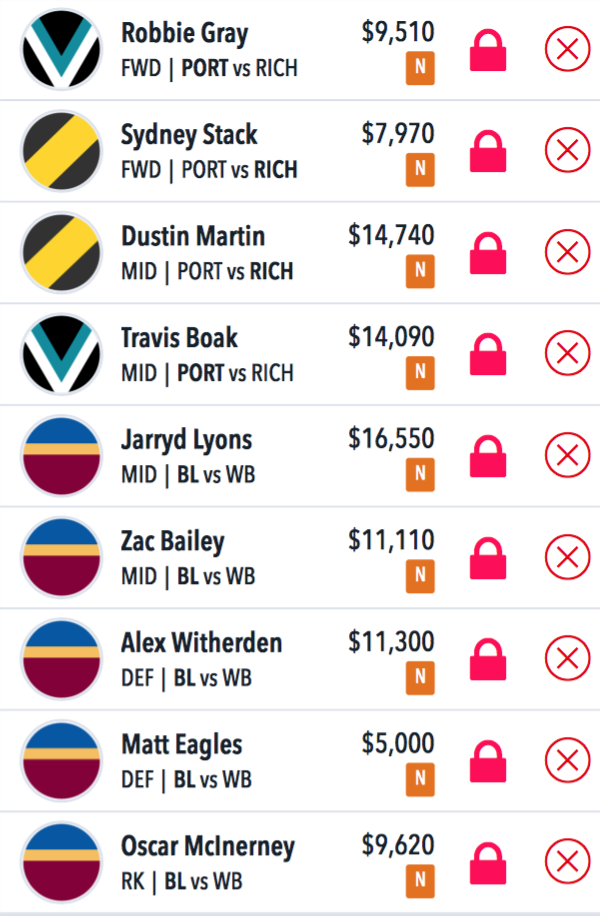 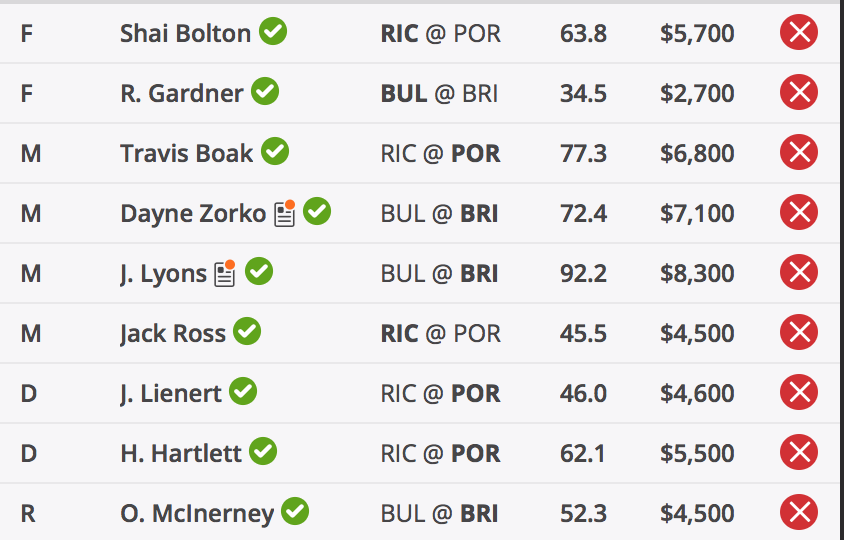