I think we can all agree that if there is one good thing to come out of these crazy times, it’s another standalone Suns game in the middle of the week. No sarcasm, this long suffering Suns fan is genuinely pumped up this season, which now brings us a game against Essendon with Suns as favourites. The weather should be good (Queensland dew aside), and there are three changes for each side, none of which are headline worthy. There is another $60,000 main contest on Draftstars, as well as all the usual options: 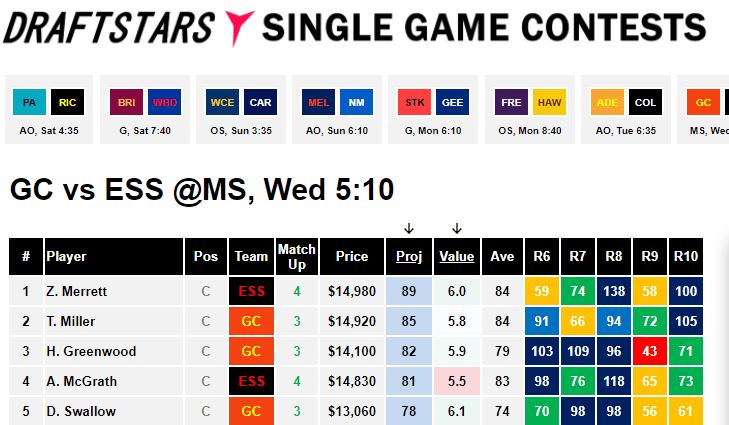 Trends: Both teams concede quite a lot of points, but it’s Essendon that gives up the most 80+ scores in the AFL, 5.2 per game compared to the Suns 4. The key places to attack Essendon are with midfielders and especially rucks. On this slate they’re a little more susceptible to forwards than the Suns. The Suns concede to defenders and midfielders at a decent rate.

FWD: Forwards are a fair matchup against both teams, so this is a chance to pair up players to finish off stacks of either team. Essendon seems to have a bit more value, with the Suns options volatile and/or unproven. James Stewart $5,000 DS / $2,600 DK has been minimum priced 3 games in a row now, and his scores have been putrid. That just means we’re one game closer to a big performance, so perhaps now is the time to jump on hoping everyone is scared off by those bad scores. David Zaharakis $9,330 / $5,300 is another obvious option, his scoring has improved a lot since he struggled earlier in the season, and 70+ is very possible.

All of the suns options are super volatile, so sprinkle them lightly throughout teams rather than going heavy on anyone in particular.

Given that midfield is open slather on this slate, it’s very hard to rule anyone out. With nearly everyone priced fairly and capable of a big score, my main thought is that I won’t be looking at Sean Lemmens $7,480 / $3,700 or debutant Sam Flanders $5,000 / $3,000, both of whom I expect to struggle for TOG and therefore any kind of ceiling. There are better spots to save some salary.

It’s a little harder to get interested in the Suns options, but I have enjoyed watching Will Powell $7,560 / $4,200 recently, and his scores have improved to the point where he could be the best salary saving option on the entire slate.

RUCK: Essendon are the best ruck target, and Jarrod Witts $13,400 / $6,400 is perfectly placed to exploit this. He’s been fairly inconsistent this season, but he won’t get a better spot to push close to triple figures. I can’t in good faith recommend using either Essendon option, so my suggested alternative is Sam Day $6,900 / $3,400. The 47 he scored last time out could be hard to beat in value terms, but his floor is abysmal and it is a proper punt if you go down that route.

Final Word: I hope my Suns bias didn’t come through too strongly in this one. I’m trying to feel confident that the odds are correct and the Suns are winning this one, but I do think some Essendon stacks are in order given we have historically been the fantasy whipping boys of the competition. Good Luck! 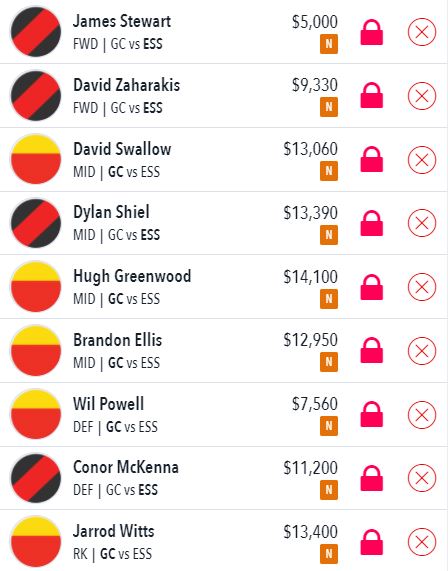 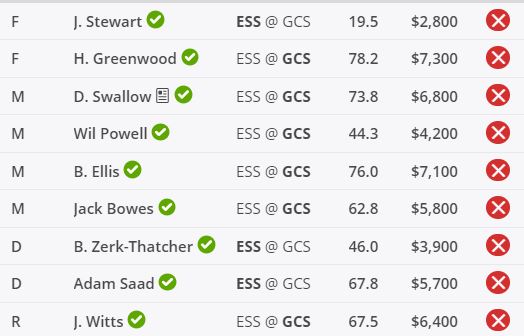