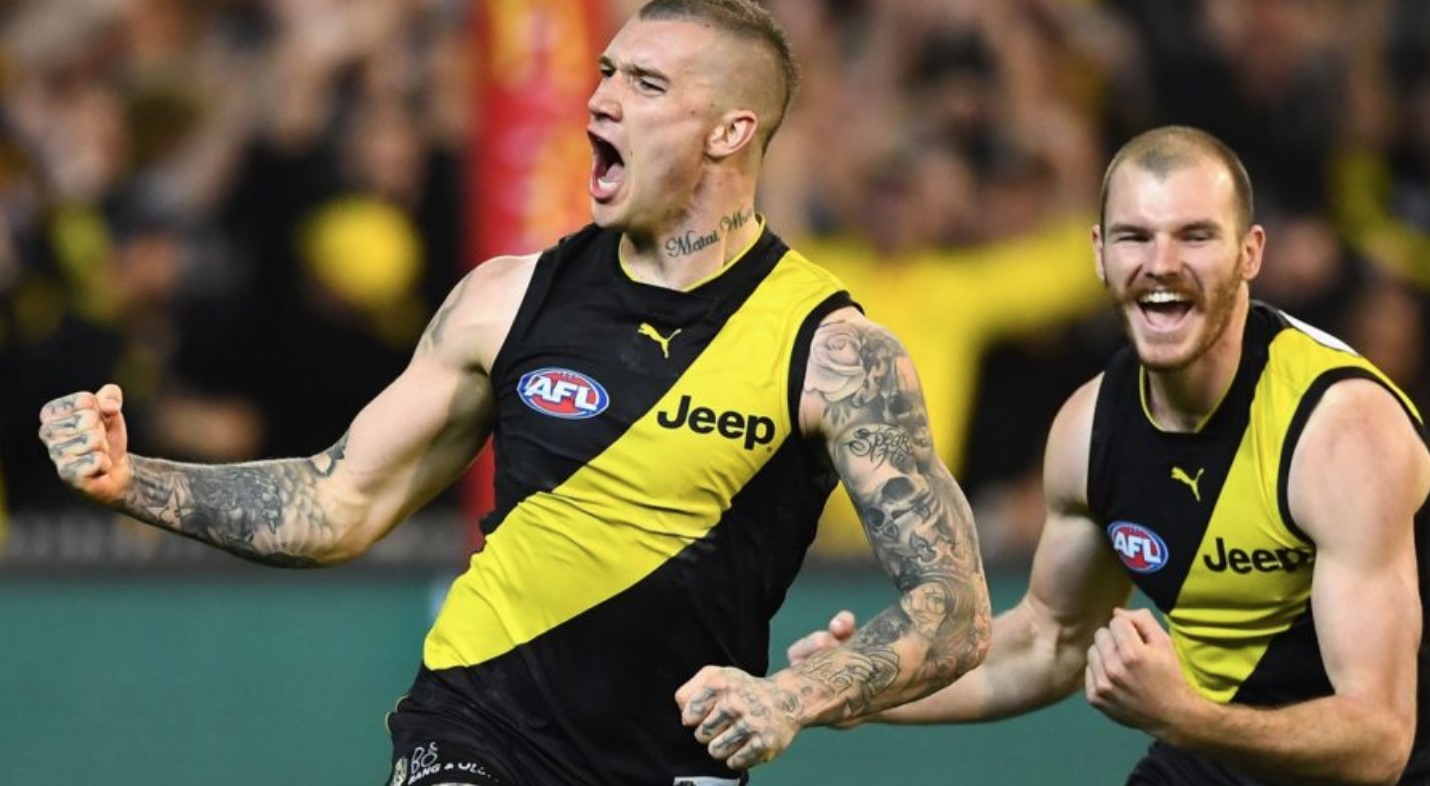 We made it! Day 20 of 20 straight days of AFL football. But we still have one last slate to get through before we can all put our feet up until Friday. This Monday night Richmond take on the Gold Cost at the Gabba and as always there are massive daily fantasy contests on offer: 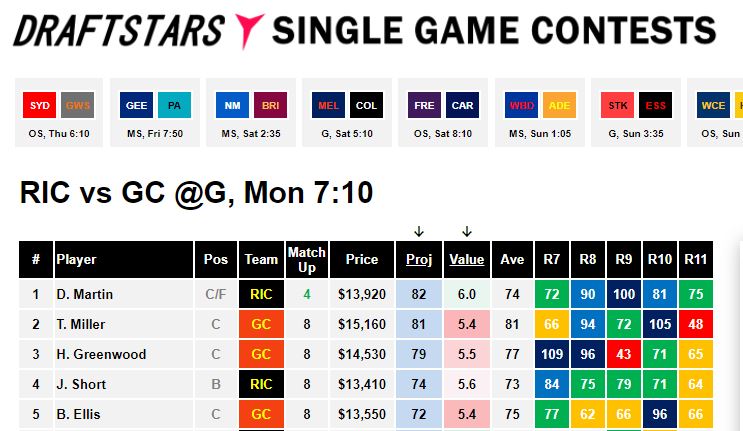 All clear, perfect night for football. Let’s dig in.

Ok backs against the Tigers. In particular premium backs with the Tigers giving up 73 points per game to the opposition's top 3 scoring defenders this year (over 5 points per player above the league average). This has been an ongoing trend and consistent with the fact that the Tigers give up the most uncontested possessions in the league.

Despite an improvement in form this season the Suns have continued to give up points to midfielders. In 2020 that has been 2.7 points per player above league average, which is the fourth highest mark in the league. The best avenue to attack this is via contested possessions with the Suns giving up the 3rd most in the league.

Rucks against Richmond continues to be a trend this season giving up 75 points per game to the opposition's number 1 ruck. In a head to head single slate battle it makes the decision quite easy considering that on the other side of the ball Witts continues to be one of the hardest ruckman to score against this season.

Powell has cemented his role in the team, playing off half back with short stints pushing up to a wing if required. On this slate he makes a solid value play, particularly when you link him with other Gold Coast defenders. As mentioned above the Tigers have conceded the 7th most fantasy points to defenders in the league this season, primarily through uncontested possessions. Powell’s recent form has been solid for this price point averaging 59.3 points per game over the last 3 matches.

If you have been a regular reader you will be aware of my love affair with Shai Bolton. He has transitioned to a consistent role in the midfield this season as the Tigers negotiate the clustered schedule and manage injuries. He has attended over 79% of the center bounces in each of the last five games, averaging 71 points per game over his last three. Trent Cotchin’s inclusion should not impact Bolton’s role given Jack Ross has been dropped and I think pairing these two up is a solid play at this mid ranged price point where both players will take advantage of the Sun's weakness in contested football.

Lukosius is really starting to come on this season and already it is clear that Gold Coast have handed him the keys to the back line in terms of rebounding outside the 50. He takes the majority of the kick ins, which provides guaranteed points and he has posted over 70 fantasy points in 2 of his last three games. As noted at the top, this is a great matchup for defenders and Lukosius will be in plenty of my Gold Coast back stacks.

Weller fits two bills. Firstly, he loves uncontested possessions, which is where the Tigers conceded a majority of their fantasy points. In addition, with David Swallow out of the line he should be in line to see a greater role on the inside. Weller essentially split center bounce attendances last week with Swallow (58%/48%), so with no Swallow playing in this game that role in the midfield will be assumed by someone else. No direct midfielder was included as a replacement; therefore Weller should expect a boost (it is possible that Brayden Fiorini could also play this role).

Dusty’s price looks tasty on this slate. Playing much more significant time in the modified recently (86% center bounce attendances last week) he has averaged over 86 fantasy points per game over his last 4 games. There isn’t much to spend up on from the Tigers on this slate, so it will be more of a balanced attack and slotting Dustin in should round out many lineups. 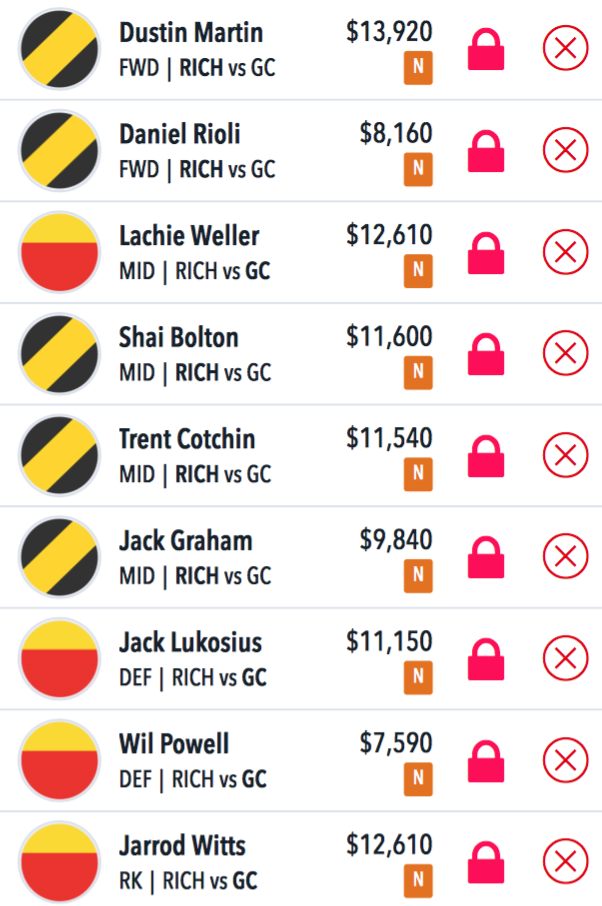 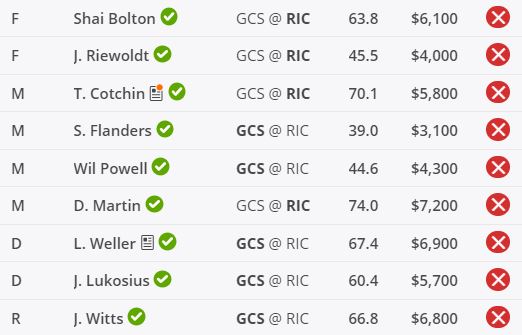