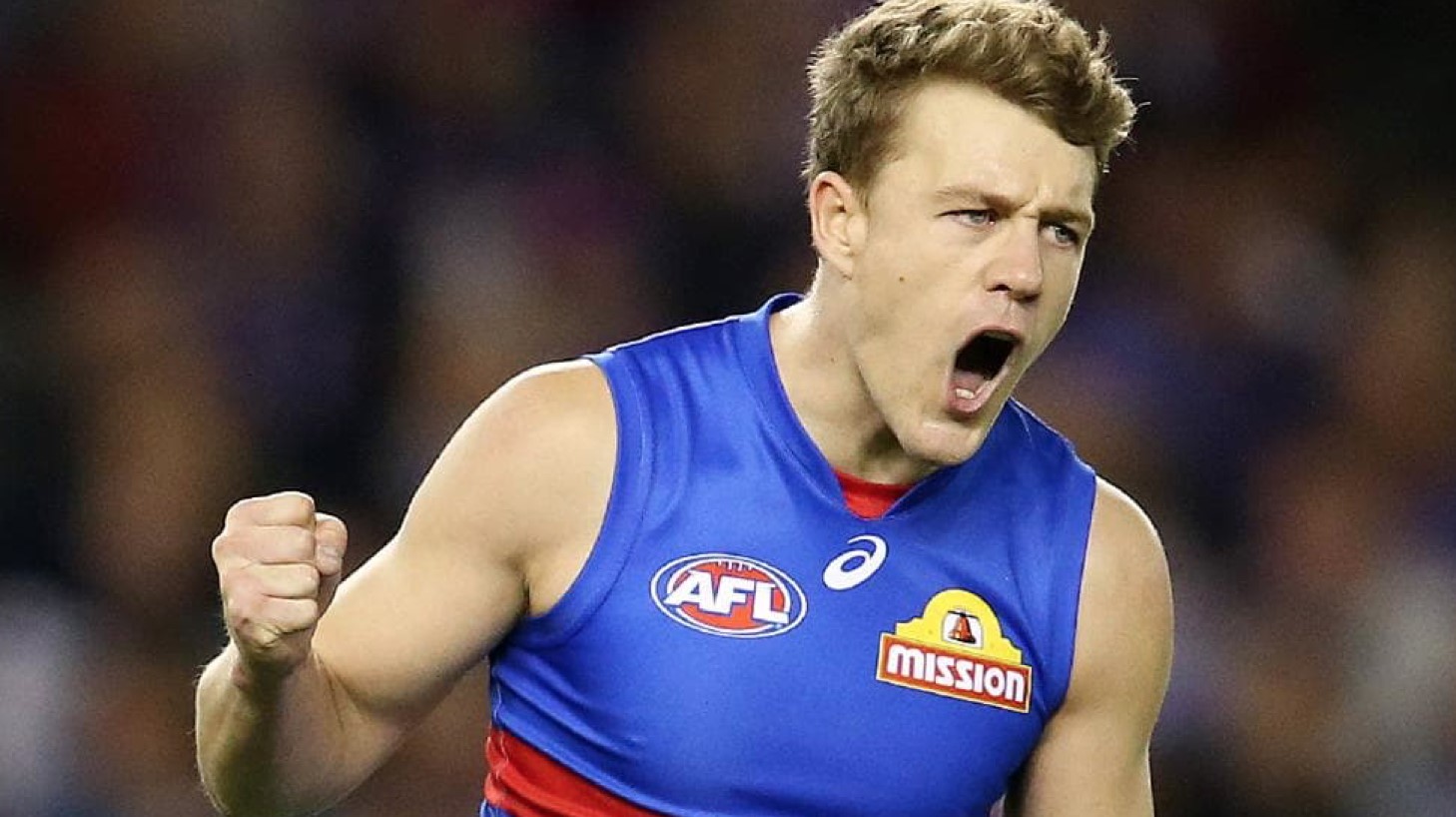 It has been a while since we have had a real super Saturday slate but it is back with a whopping four games of action to go through… Let’s get cracking! As always there are several monster daily fantasy contests on offer across the major platforms:

Overall it is a pretty clear day across the football states for this Super Saturday, which means we don’t have to target wet weather players and can feel free to load up on all the outside players we like. The only game to keep an eye on is Port Adelaide vs Hawthorn with Adelaide forecast to possibly get up to 5mm of rain. If this occurs remember to focus on rucks, tacklers and inside midfielders, but it is unlikely to be enough to heavily impact the contest.

Everybody’s favourite team to target with backs is on this slate with the Hawks clean sweeping this season in points conceded the defenders overall, for top 3 scorers and the bottom 3 scorers. Feel free to link anyone playing in the back line for Port Adelaide in this matchup, but remember that Hawthorn are particularly vulnerable to key backs and this gives an opportunity to snag some value plays at low ownership. If you are looking to go against the grain somewhat Melbourne and Richmond are also top 6 this season or points conceded to defenders.

Despite their recent resurgence the Demons are still leaking plenty of points through the midfield at 74 points per game (second most in the league, and is still at 73 points per game over the last 5 matches). This is perfect for the matchup against the Bulldogs who accumulate the second most disposals in the league, including the second most uncontested possessions (Demons concede the 3rd most). Bulldog stacks through the middle stands out as an elite play for the second week in a row.

This was shaping up to be an all in assault on Max Gawn this round until he didn't get up for the contest. Western Bulldogs still give up the most points to number one ruckman at 81 points per game (89 over the last 5), which is almost 4 points per game higher than the second side. So while Preussy isn't always the most attractive option giving his football capability he will still be a strong play on this slate.

Playing his first game of the season in 2020 for the new club Hawthorn. Hartley will replace James Sicily in the back line and given his fantasy average over the past three years for Essendon where he averaged 52+ in each season, he looks to be underpriced. It isn’t a great matchup, however the Hawks do like to possess the ball in defense and without Sicily in the lineup there is one less option available.

All Port Adelaide defenders are in play on this slate. Literally every single one. I love to target the cheaper key defenders who will typically come in under owned. Tom Jonas in particular is 14th in the league for intercepts this season and the Hawks have been conceding the most intercepts this season. We only have to look at what Tom Barrass and Brennan Cox did over the past two rounds to get an idea of the potential here. Link him up with Lienert who should benefit from Houston being out, or quite frankly play him with Darcy Byrne-Jones, Hamish Hartlett, Sam Mayes or anyone with a pulse in the Power back line. Hell I could line up out there and lob in 75 fantasy points.

Martin has yet to really blow the doors of a game, particularly from a fantasy point of view but there is one number I am absolutely giddy over. Last round he attended 100% of the Tigers centre bounces. Yes 100%... and now he wasn't rucking. This number has been on the incline in recent weeks as the Tigers continue to use him through the middle and more specifically at center stoppages and then pushing forward. Martin averages over 102 fantasy points per game against the Dons throughout his career and is at a nice price point for someone with his level of upside.

Brayshaw has moved back into the midfield more significantly the last two weeks and low and behold if he hasn’t been playing better football in his most natural position (absolutely shocking I know). He has had his highest center bounce attendances of the season in his last two games in returning 100+ scores in both matches. At his current price that return is a slate breaker. Expect him to be popular as the recency bias players jump on board, but with his upside it could be fatal if you miss out.

Let’s watch the field flock to Marcus Bontempelli who had his best game of the season last week while we back it up over Jackson Macrae. There has been a slight price decline after a very subpar performance last round in the matchup of the season, but fortunately we draw the next best thing with the Bulldogs playing the Demons this week (concede the 2nd most points to midfielders). Macrae still saw plenty of centre action last week attending 75% of the centre bounces, so role wasn’t the issue and I expect a strong bounce back game this week at lower ownership. Stack Macrae up with Hunter, Smith, Bont, Liber, the works. Even mix in Josh Dunkley who will likely be the lowest owned of the group given the fact he has not played much midfield since returning from injury. 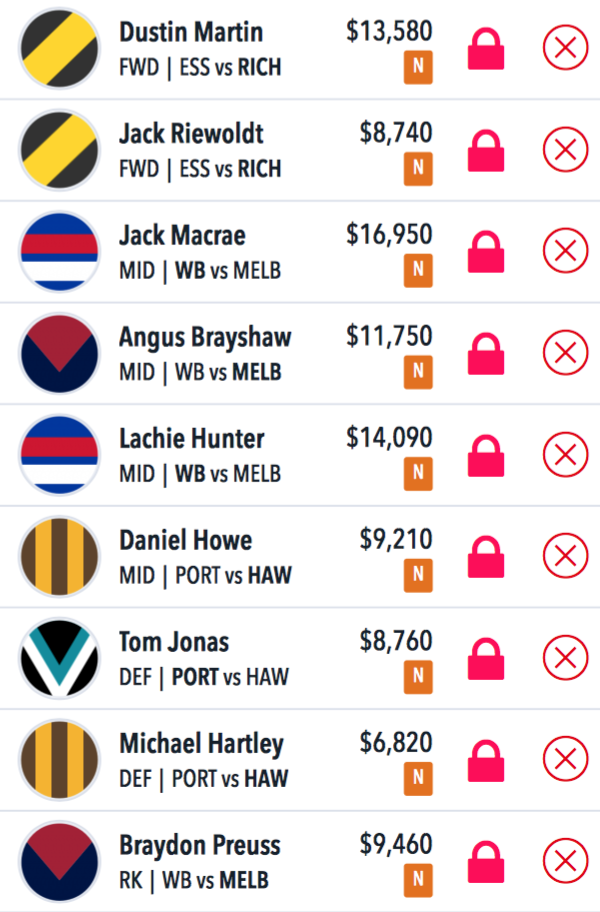 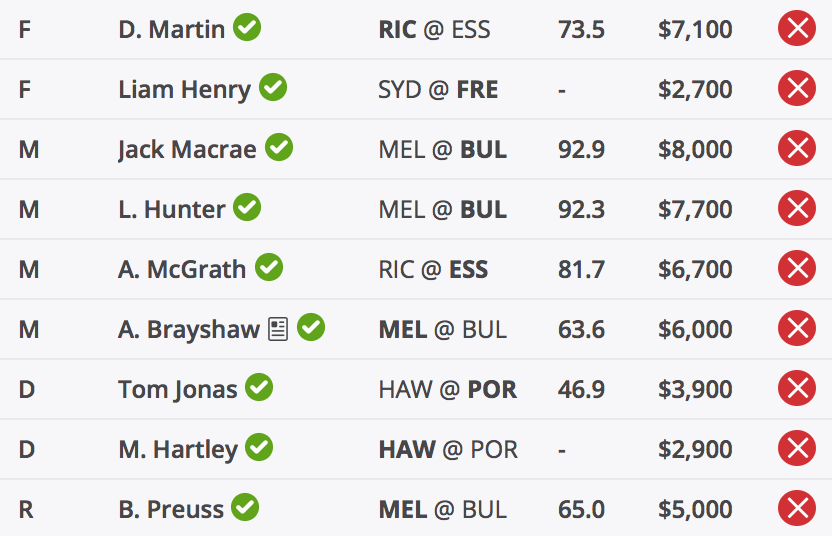