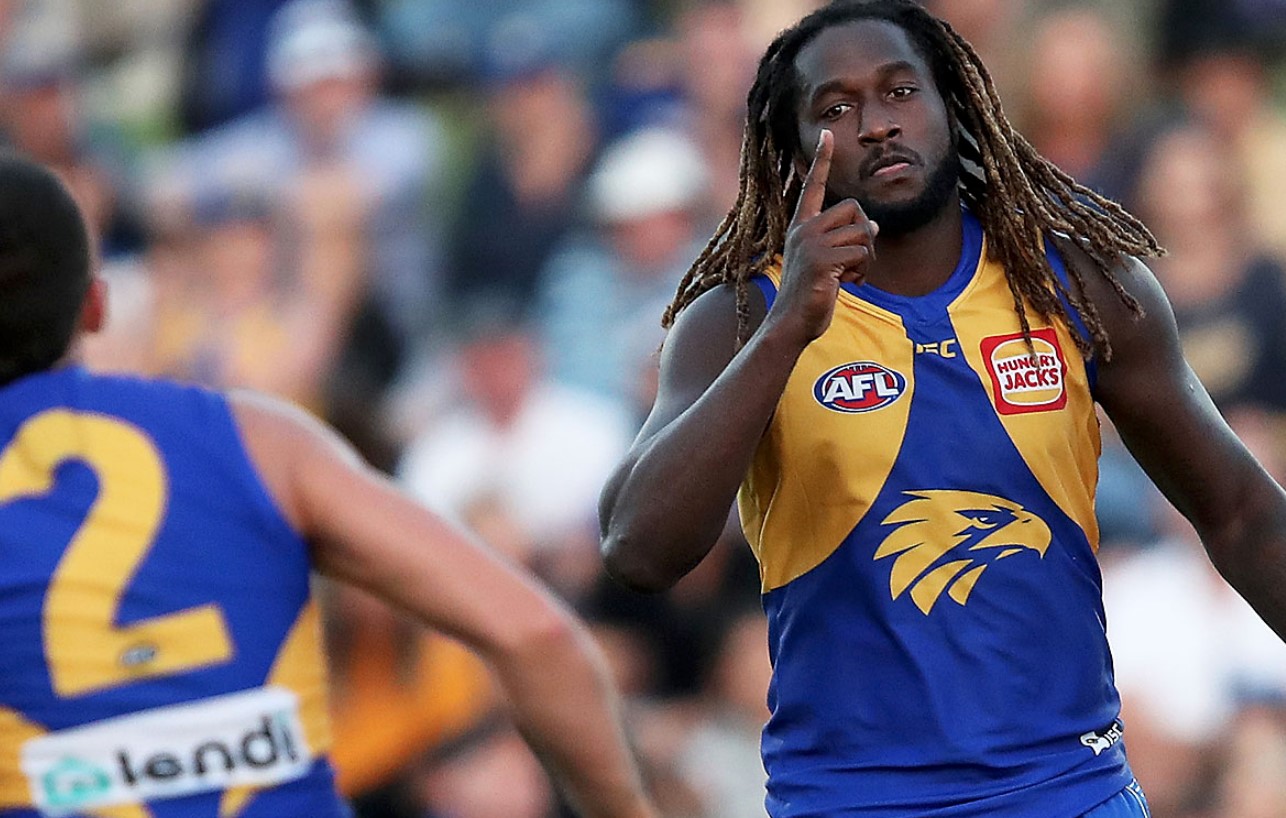 We return to a multi game slate for Sunday with 3 games on the card. As always there is a massive array of daily fantasy contests on offer:

Showers are expected across south east Queensland with a small chance of thunderstorms. This is expected to hit during the evening, which means it will likely be the late game (WCE vs WB) where you ended to consider the impact.

Hawthorn have been our favourite team to target with backs all season. This has been a trend that has continued for years, particularly with key backs. The last two weeks it hasn't paid off and we can see Hawthorn have slightly tightened up over the past five weeks. That is a very small sample size, however, and I will continue to attack it on this slate.

Essendon have given up the fourth most fantasy points in the league to midfielders this season and you would expect that Geelong put them to the sword on this slate. The other team to consider attacking is Hawthorn who have given up the fifth most points when you isolate the top three scoring midfielders (they have conceded the most disposals in the league this year).

No surprise to see the Western Bulldogs giving up the most points to the opponents’ number one ruck this season, by almost 5 points per game more than the next highest. This number has ballooned to 86 points per game over the last 5 as the Western Bulldogs no longer appear interested in using Tim English as the ruckman and now going with an extra midifield as Josh Dunkley handles the majority of the duties around the ground. This should result in an absolute domination by Nic Naitanui.

Greaves is debuting for the Hawks on this slate at the minimum price, which makes him intrigue play as no other viable options at this price point. His role is attractive from a fantasy perspective playing as a rebounding defender off half back he possesses great kicking skills, strong decision making and a high level of endurance. This opens up the opportunity to pick up uncontested possessions, particularly given Hawks do like to play this way. If you are looking to squeeze in premiums and need salary relief, he is an ideal option.

The GPP key back against Hawthorn play. WIlkie has already shown upside this season posting a season high 75 earlier in the year and several scores of 60+. This is effectively the best matchup in the league for a player in his role and I will be looking to stack him up with other St Kilda backs on this slate.

There are some concerns regarding game time now for Naitanui as the West Coast continues to grind out a number of games during a short time frame. That said he should win every single hit out he contests in this matchup and if the Western Bulldogs continue to go with a midfielder at a large portion of ruck contests expect him to just grab the ball and walk it out of the ruck contest over and over. He does have 90+ upside, which would be enough on this slate, however if you are nervous about his scoring potential a great pivot is Rhys Stanley at similar pricing who also draws an elite matchup against Essendon youngster Sam Draper.

After a run of poor scores Clarke has seen a slight drop in his price and is set for one of the top matchups in the league for defenders. Clark’s upside sits around the 90-point mark in the short quarters and this is an opponent where that score is in play. I will be using him alongside players such as Wilkie highlighted above as part of my St Kilda back stacks.

Redden has been a player whose role was squeezed almost entirely out of the inside midfielder this season with the arrival of Tim Kelly, however with the injuries racking up at West Coast he will be required to play significant time on the inside in this matchup. Last game without Elliot Yeo in the lineup he posted an 84 point game, and now Shuey has injured his hamstring there will only be further opportunity opened up. Redden in this role has shown massive upside in past years and looks to be a lock at this mid-range price point.

Hard to have envisioned Guthrie would be a play at these prices before the season started. He has locked himself a role on the inside midfield, however, and he looks to be the safest play of the Cats mids. I will be looking to load up through the midfield as they play an Essendon team that, not only should the Cats defeat handedly, but has also given up a top 5 amount of fantasy points to the position this season. Duncan, Dangerfield and Menegola are also solid plays, however Guthrie has the greatest assurance of midfield time of this group and sports a 120 point upside in the shortened quarters. 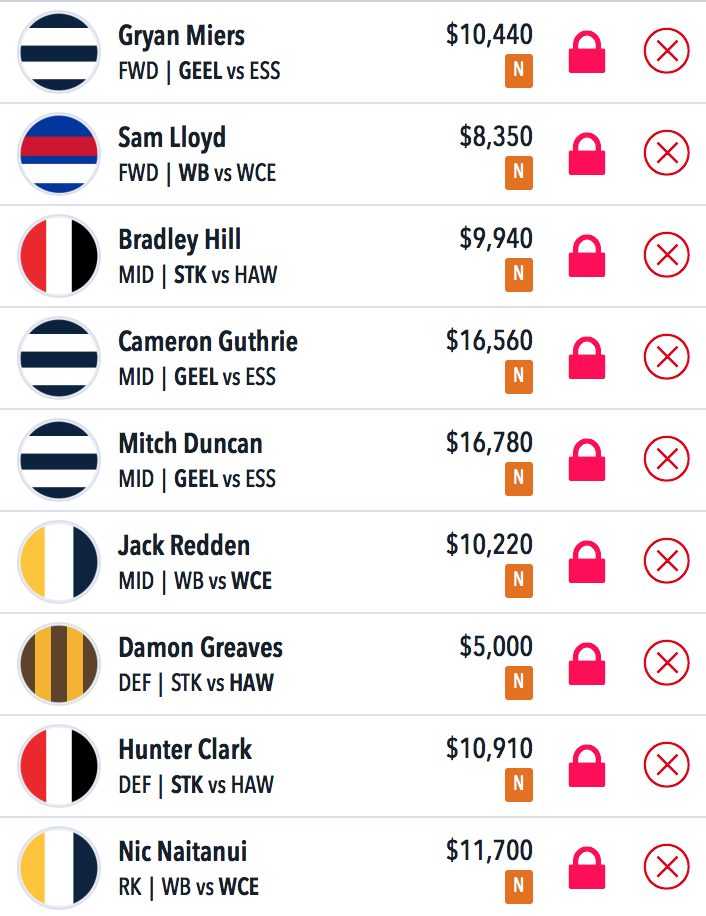 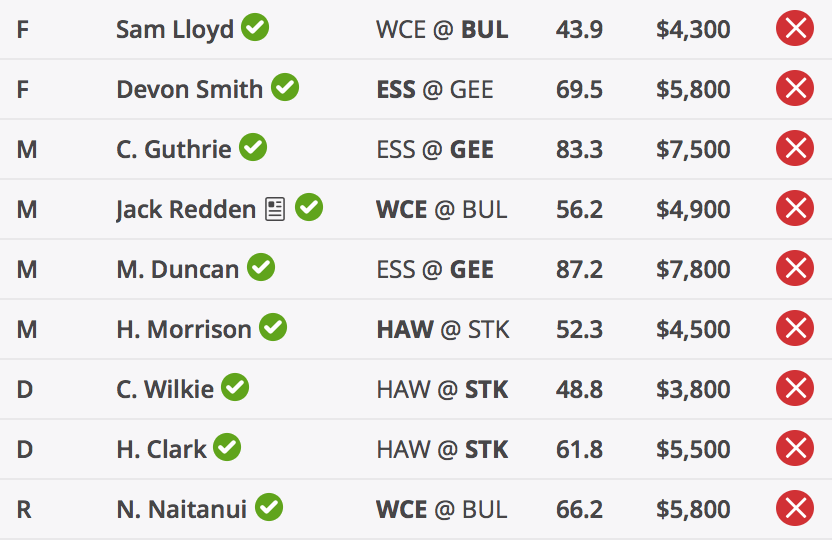