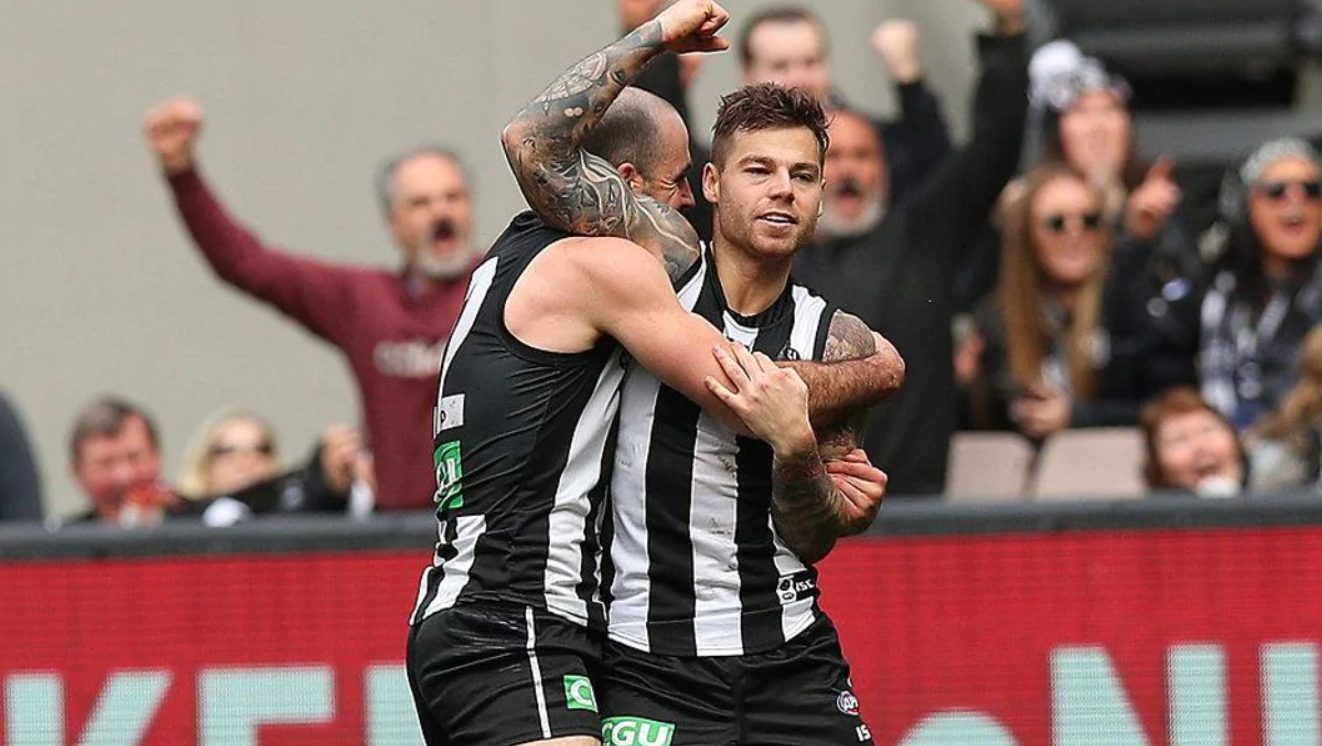 To finish round 17 we have a couple of mid-pack teams slogging it out in the Brisbane dew. Okay, the Suns are slipping down the ladder but I’m trying to keep a positive view of their season. Collingwood need one more win to secure a finals spot, so they should be up and about for this one. 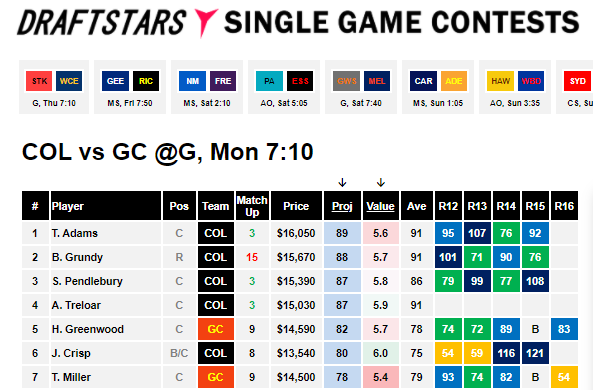 There are some big ins for Collingwood with Jordan De Goey and Adam Treloar back, while Jaidyn Stephenson and Tom Phillips go out. Jarrod Harbrow in for the Suns is the most relevant of 3 changes.

Trends: These teams are hard to separate on total points. The Suns are slightly more generous to their opposition, and over the season have conceded more 80+ scores, but lately they’ve been even so we’d better find some positional advantages. Very simply, we want to play backs against Collingwood, and Forwards/Mids against Suns. That’s perfect for this slate with Collingwood comfortable favourites.

FWD: Let’s start by finding a disgustingly cheap Collingwood forward that can get on the end of some cheap goals and provide great value. Mason Cox and Josh Thomas are both reasonable chances, but maybe we don’t have to dip that low with Brody Mihocek nice and cheap and with a much better ceiling than anyone else in the range. Jordan De Goey hasn’t played for two months, so who knows what to expect from him. The better play is Jamie Elliot, who has been getting lots of midfield time lately. The return of Treloar could threaten that, but I’m still expecting him to have a nice role.

MID: Josh Daicos is the most obvious pick on the slate for me, he’s been solid all season (particularly the last month) and the price just refuses to go up. He should be able to get on the end of plenty of cheap marks on his wing. Other than that, there isn’t much clear value, with the cheap Tyler Brown a potential salary saver as another guy likely to be mostly stuck forward but who could get on the end of some goals. Jack Crisp is the form pick with two massive scores in a row, but he is another who could lose some of his midfield opportunities with the returning players.

DEF: It’s very hard to go past the upside of Jack Lukosius, who is the only Suns back that can give us 80+ points. Levi Greenwood doesn’t really fit the narrative of playing Suns backs, but he’s cheap and could play some midfield time, so he should be a reasonably popular selection. Jarrod Harbrow and Will Powell are two other Suns who’s best is good enough at their prices. They’re far from safe but backs against Collingwood is a strong enough trend to close your eyes and hope for the best.

RUCK: The trends are bad for both of these teams against rucks, so lets just say that cancels out. Brodie Grundy should get a clean run at it without Darcy Cameron around, so he’s my pick as the massive upside pick at an unusually low price. If not him I’ll be taking Jarrod Wiits, no need to go cheap at this position tonight.

Final Word: It’s a bit of a rough slate with no absolute locks at any position, so you can most likely play just about anyone within the confines of the Pies stack with Suns defender’s template. If you want to build some Suns stacks….good luck! 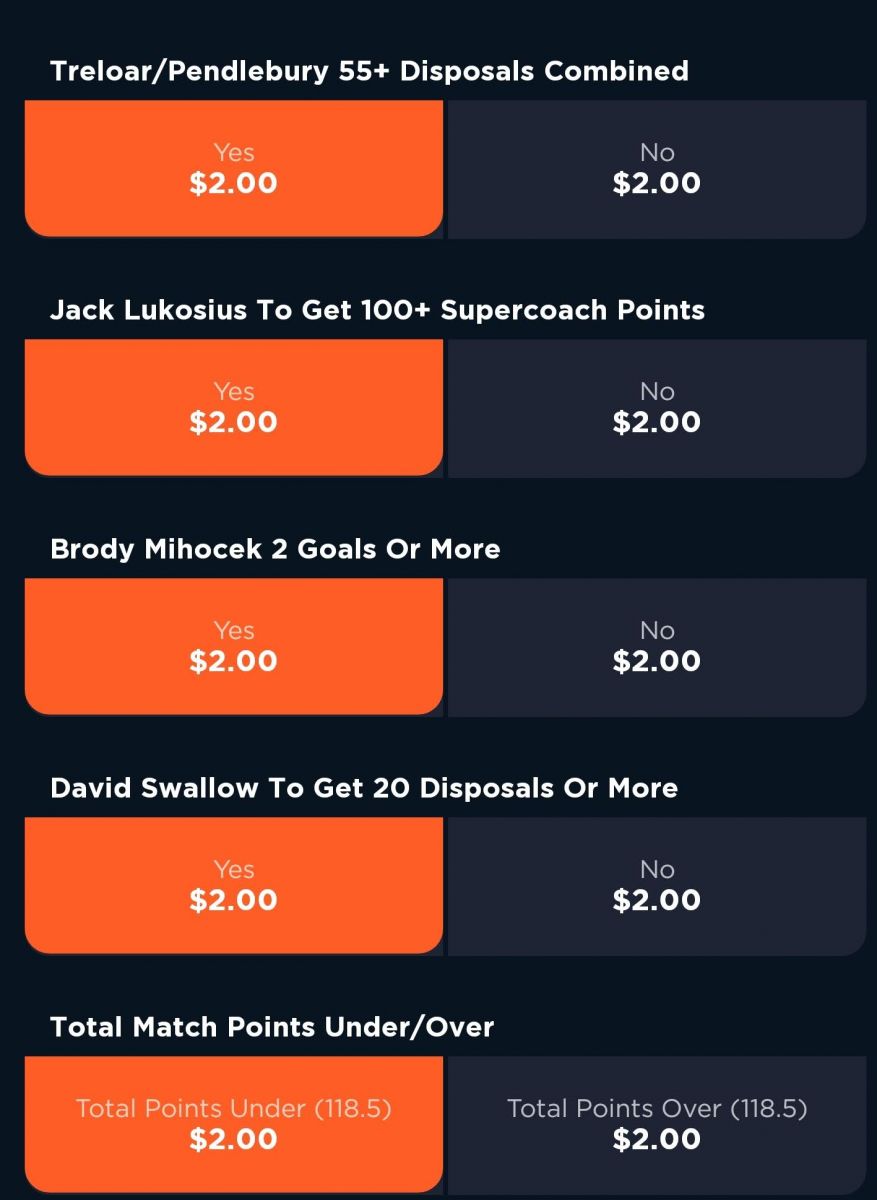 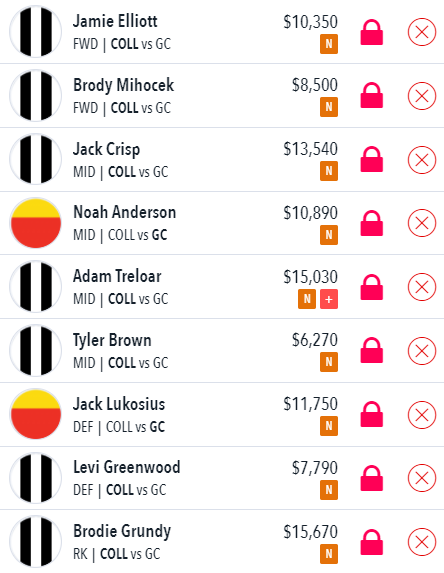