Time to round out the weekend with another beautiful 3 game slate. The DFS platforms continue to offer massive daily fantasy contests:

Perfect conditions in Gold Coast and Adelaide tomorrow for football, which is reflected in the high game totals for each of those contests. Cairns we will expect some showers and all the fun and games of a dewy slippery Northern Queensland night game, however all in all there are no significant weather factors to worry about on this slate.

If Hawthorn are on the slate it means load up on the defenders of their opponent. It has been this way all season (and a trend that has continued on from previous seasons). They have given up the second most points to the position this year and the most when you isolate the bottom three scorers. This means we can hunt some value through Western Bulldogs backs, particularly key backs as the Hawks have been quite susceptible to this spot.

Midfielders against Adelaide has been a thing all season and despite the Crows being far more competitive in recent weeks that trend has not changed. They have given up the most points in the league to the position at over 8 points per player above the leave average. When you isolate the top three scorers that number jumps to over 10 points above league average with the Crows conceding a ridiculous 99 points per player. Spend up, stack up.

Another dream spot here at the ruck position as everyone's favourite target, Tim English, is on the slate. English and the Bulldogs have conceded 78 points per game to the opponents number one ruckman this season, which is the highest in the league and 5 points per game higher than the next closest. Half the contests nowadays aren’t even against English, but whichever poor sap of a midfielder Beveridge is sending to the slaughter.

Sydney have given Callum Sinclair a rest this week and brought in youngster Joel Amartey to help fill the void at ruck. Amartey isn’t a dedicated ruckman but rather a forward/ruck hybrid. He is the bare minimum price and anyone at that cost who will see substantial ruck time is certainly in play. At the NEAFL level he has averaged 12 disposals, 8 hit outs and just under 4 marks. He will almost certainly split duties with Aliir Aliir who can also make for a nice value play when rucking. His season high this year of 66 came when he lodged 10 hit outs, and that is about his ceiling. It is by no means an easy matchup against Brisbane so consideration of a fade is warranted.

Maginness is on debut for the Hawks and comes in as an inside midifielder for a team that has had holes through the middle in recent weeks. They regain Jeagar O’Mearer this week, however he replaces the injured Worpel. As a result, I think there will be room for Maginness to see a few stoppages and centre bounces. Anytime a minimum salary player will be getting a run through the midfield they are a solid play.

Hinge played two games last year and returned a 68 and 41. At almost the minimum they are solid scores and worth consideration. He is a medium size running defender who will have every opportunity to get amongst the uncontested possessions off the back line on this slate. Brisbane are almost 3 goal favourites and if they get on top, we saw last week what can happen at the end of a blown out game when the ball is moved around the back line.

Ben McEvoy returning to the side throws the cat amongst the pigeons somewhat on this play. The last two games McEvoy played he barely rucked beyond minor chop outs, which indicates Ceglar will likely be the lead ruck again on this slate. We highlighted above how good this matchup is and Ceglar has already shown 80+ upside this season.

Scrimshaw’s role has opened up since Hawthorn started facing injury concerns to James Sicily and Isaac Smith. Playing a much looser role across half back while also pushing up onto the wings Scrimshaw has taken advantage putting up 2 games of 84+ fantasy points from his last three. He was heavily owned last week and let down with a 55 point score, however this only means a lot of that ownership will drop away making him an even more intriguing play.

Crouch remains underpriced for his scoring potential. The Crows look to have backed in their senior midfielders in recent weeks and low and behold they have been much more competitive (including their second win of the season last week). It is an amazing concept that playing your seasoned veterans in their correct position gives you a better chance of winning. Crouch piled in over 90 points last game while attending almost 70% of the centre bounces. If he continues in that role, he has 100+ point potential at a very reasonable price.

Playing Patrick Cripps this season has left nothing but a dirty taste in the mouth as he forever battles his way to an 80-point score. Still he is hard to ignore at this price point considering his upside and the fact that he has drawn the best matchup in the league against the Adelaide Crows. If you are looking for a stack, or simply are sick of Cripps burning you and want an alternative, go directly to Sam Walsh. His last three games are 88, 96 and 114, which shows his consistency and upside. Walsh thrives on the outside and the Crows have conceded the most uncontested marks in the league this season and second most uncontested possessions. 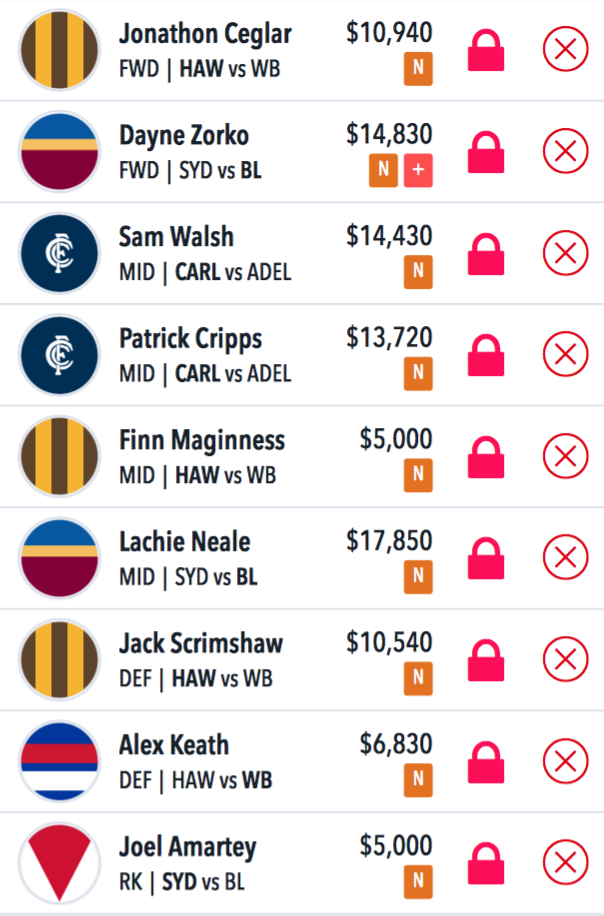 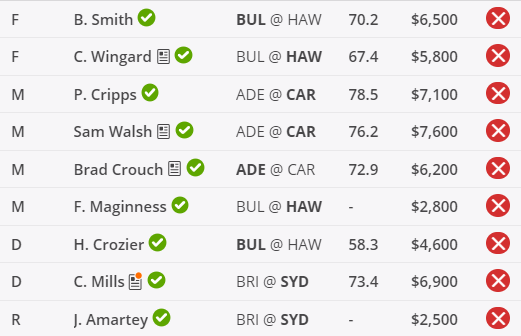