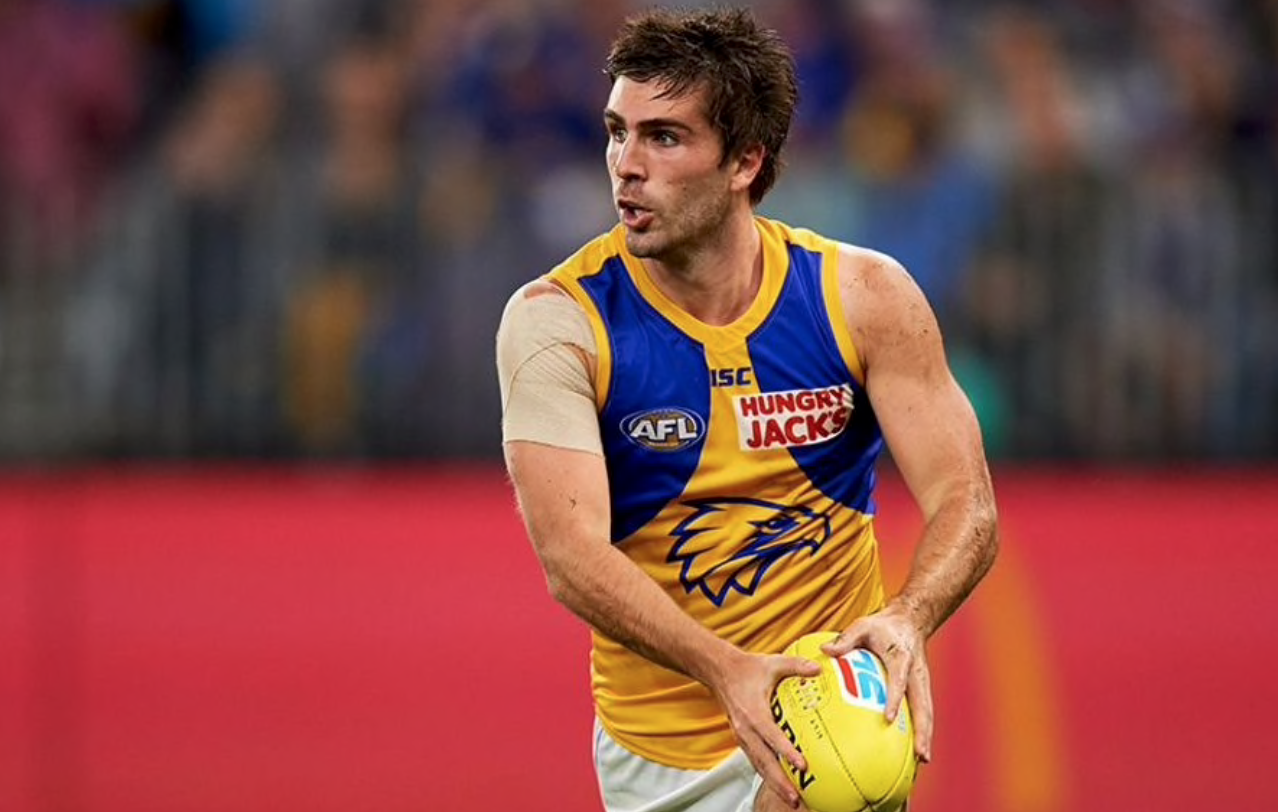 Fresh off a two day break we roll right into the last round of this chaotic season this Thursday night as North Melbourne take on West Coast at Metricon Stadium. The Eagles are still hunting a top 4 spot while North are playing for draft positions and the major DFS platforms have plenty of massive contests on offer:

Looks about as perfect as a Queensland night game can be for football this Thursday with no hint of rain and only some mild dewy conditions to contend with.

It is really no surprise to see the team currently tied for wins at the bottom of the ladder giving up points through the midfield. The key point to note however, is while the Crows have seemingly turned their play around late in the year the Kangaroos look to have totally given up. Over the last five rounds they have given up 76 points per player to mdifielders, which is the most in the league. When we isolate the top three scoring players at the position this amount balloons to 99 points per game. The Eagle middle is still depleted but this looks like a good option to stack up.

Things remain juicy up forward, which suits the West Coast as they have a plethora of options in the section of the ground. All year North have been in the top teams for points given to forwards, particularly the top three scorers where they conced over 5 points per game above league average (second highest in the league).

Foley comes in on debut in what is really the dream matchup with the Eagles trying to secure a top four spot while North are simply waiting to go on holiday. Playing off the half back Foley will be in the running to collect uncontested disposals as West Coast setup their attack across the half back line. He averages 12 disposals and just over 3 marks in the WAFL, which are not jaw dropping numbers but that is all he will need at this level to return value. If the game is a blowout he could collect that in 5 minutes of junk time.

An alternative at similar price is Flynn Perez (DS $5,000, DK $3,200) who burnt a lot of people last week and will go under owned in comparison. North Melbourne will likely lose big but for the back line that can sometimes work to your advantage in the back line, so consider him as a nic pivot.

Last week showed exactly why the Eagles were comfortable paying up in the off season to bring in Tim Kelly. It was his highest scoring game of the season displaying an absolutely monster ceiling in the 115+ range. His price hasn't risen too much and becomes an elite play on this slate given North are giving up the most points in the league to midfielders over the past 5 games. The pivot here at similar pricing would be Dom Sheed (DS $13,290, DK $6,800) who returns from injury and will eat into Liam Duggan’s midfield time.

This guy is really turning into something special. Through this year his field play has developed immensely and it has resulted in more possessions up the field with four scores of 71+ from the last 6 games. This will be the best matchup of the lot with North Melbourne giving up the third most points in the league to forwards this season.

Hard to pickout North players in this matchup, but remember they do average much higher possession totals than the Eagles and have an ability to soak up possessions going nowhere. Simpkin is quite simply underpriced for his capability and the role he has slid back into. Attending just under 80% of the CBAs for North last week he was back to levels similar to early in the season where he posting 90+ point games every other week and had a ceiling of over 100.

Gaff attended 100% of the centre bounces for West Coast last week, which I would guess has to be a record high for him. While that number will likely reduce with Sheed returning I still expect him to play a heavy combination of inside and out. He lodged one of his highest scores of the season in the role at 110 points, and got better as the game went longer utilising his stamina to great effect. As mentioned several times above this is an elite matchup for Gaff (better than last week) so he tops the list of premium plays. 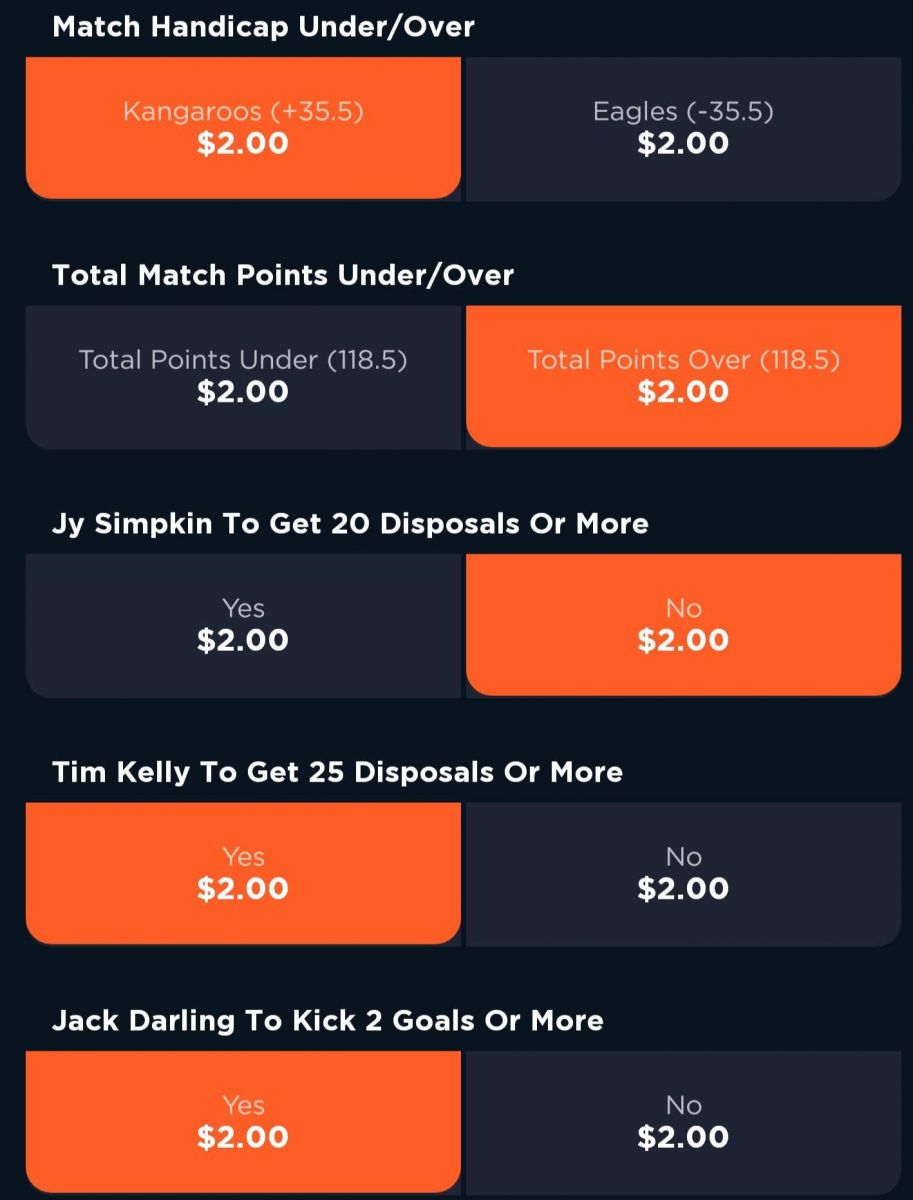 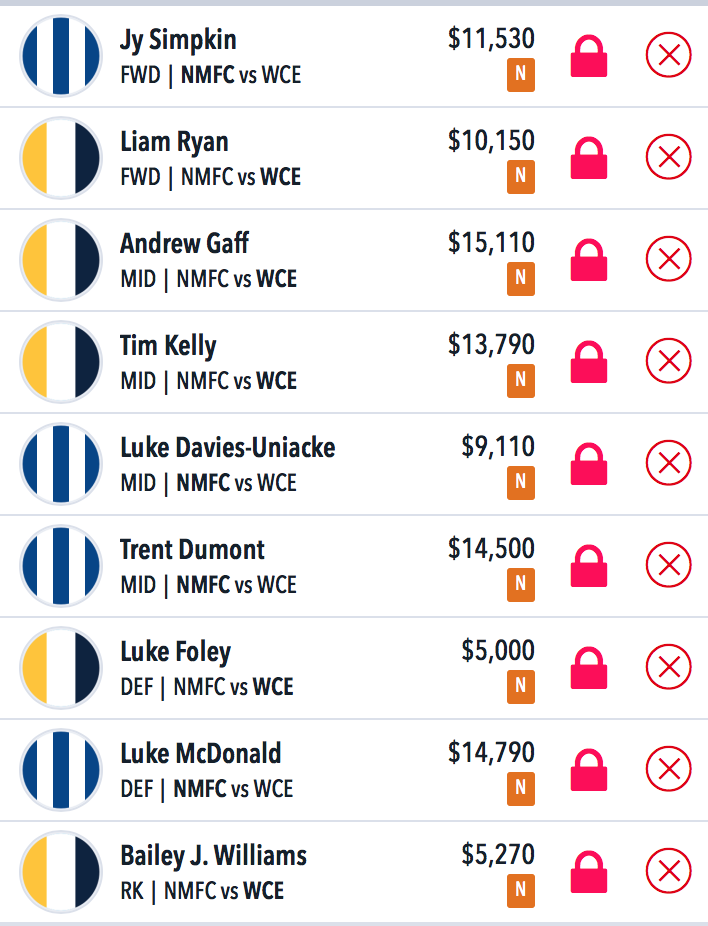 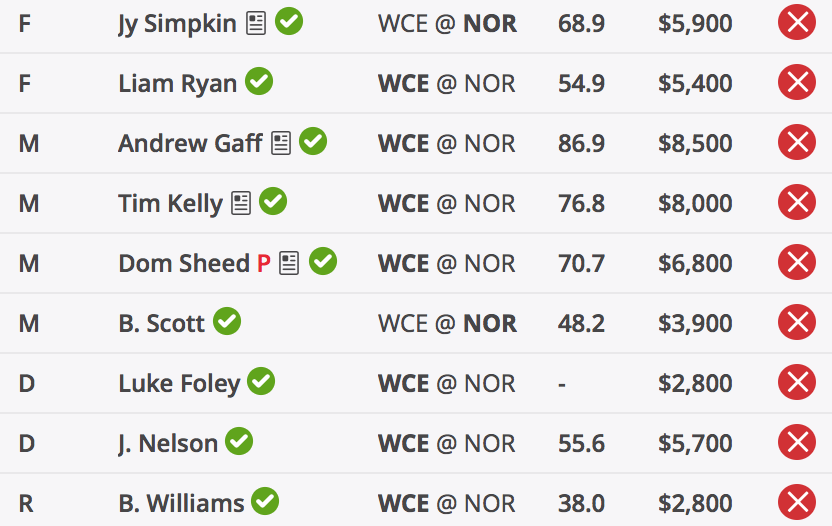