The last Friday night game of the regular season has St Kilda taking on GWS in what is an all but a dead rubber for the Giants unless they can make up an enormous amount of percentage. The Saints on the other hand will be doing everything in their power to avoid the possibility of a trip out West during round 1 of finals.

There are massive daily fantasy contests on offer for this match: 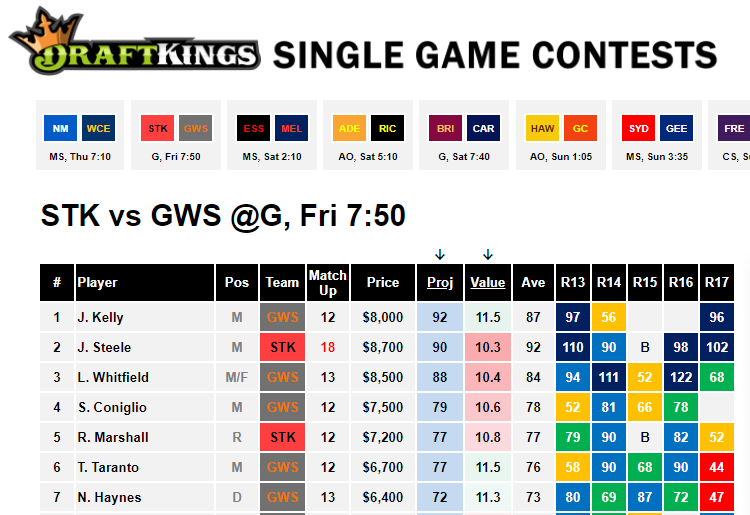 Slight chance of showers through the afternoon and evening in addition to another warm day means we can expect dewy conditions similar to what we saw in Thursday’s game. A slippery contest that will make it difficult for key forwards and great for inside midfielders.

St Kilda and GWS are two of the hardest teams to score against in the league giving up the fourth and sixth fewest fantasy points in the league this season respectively.

Rucks have been the one area across the year where you can attack both sides, however it certainly worth highlighting that Saints have been incredibly stingy recently as they have seemingly got the grasp on managing the dual ruck setup of Ryder and Marshall. Over the last five games they have conceded just 63 points per game to the opposition ruck man. 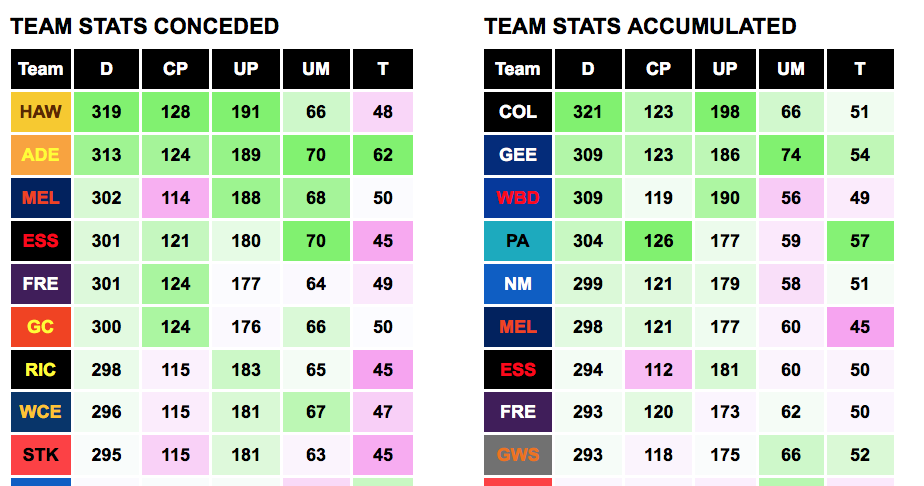 One statistical area to attack the Saints on is uncontested possessions. This year they have given up the 5th most in the league at 181 per game and on this slate I would be looking for Giants who thrive on this stat.

This isn’t really going to set you apart as I expect Greene to be the highest owned player on the slate in this matchup. Fresh off an outstanding performance last week notching up 30 touches (21 contested) and 86 fantasy points he will be more than at home in the slick conditions. He is going to be 80+% owned, so if you are considering a fade save it for GPPs.

Ryder has gradually assumed a much higher portion of the ruck contests as the season has progressed. He has posted 22+ hit outs in each of his last two games while Marshall spends more time playing forward and around the ground. In this matchup I will be looking to take advantage of the fact that GWS give up the second most hitouts in the league this season. This is even more enticing given the expected conditions that will likely lead to a higher number of stoppages.

Clark has been teasing to go into the midfield more all season, however lineup changes have kept him out. Last week he got up to 33% CBA attendance, which was his highest of the year. Zak Jones has been replaced by Dan Hannebery who is more likely to play forward and off a wing in his return leaving more opportunity in the middle. We have seen two 80+ point scores from the last 4 games by Clark indicating he has sufficient scoring potential at this price.

This looks like another split decision as we lose Zak Jones who attended 50% of the CBAS last week and typically is around the 75+% mark. Ross (78%) and Sinclair (50%) should both be on the inside a significant amount in this game and have the capability to post 70 point games, which would be a value return at this price point.

Steele has become one of the most consistent plays in DFS this season. From the last 8 games he has just one score under 90 points and 3 of 102+. As a contested monster and tackling machine he is well suited to these conditions in the Queensland nights and if you can find appropriate value to plug him in you can sit back and be assured that there will be a score over 90 points to follow.

The uncontested king. As noted above this has been the weakness of the Saints this season giving up the 5th most in the league. I expect Lachie Whitfield to take full advantage of this roaming across the half back. While he is not as consistent as Steele, upside is the name of the game for GPPs and Whitfield offers that in spades posting a 122 and 111 in his last 4 games. If you are choosing between the two it is Steele for cash games, Whitefield for GPPs. 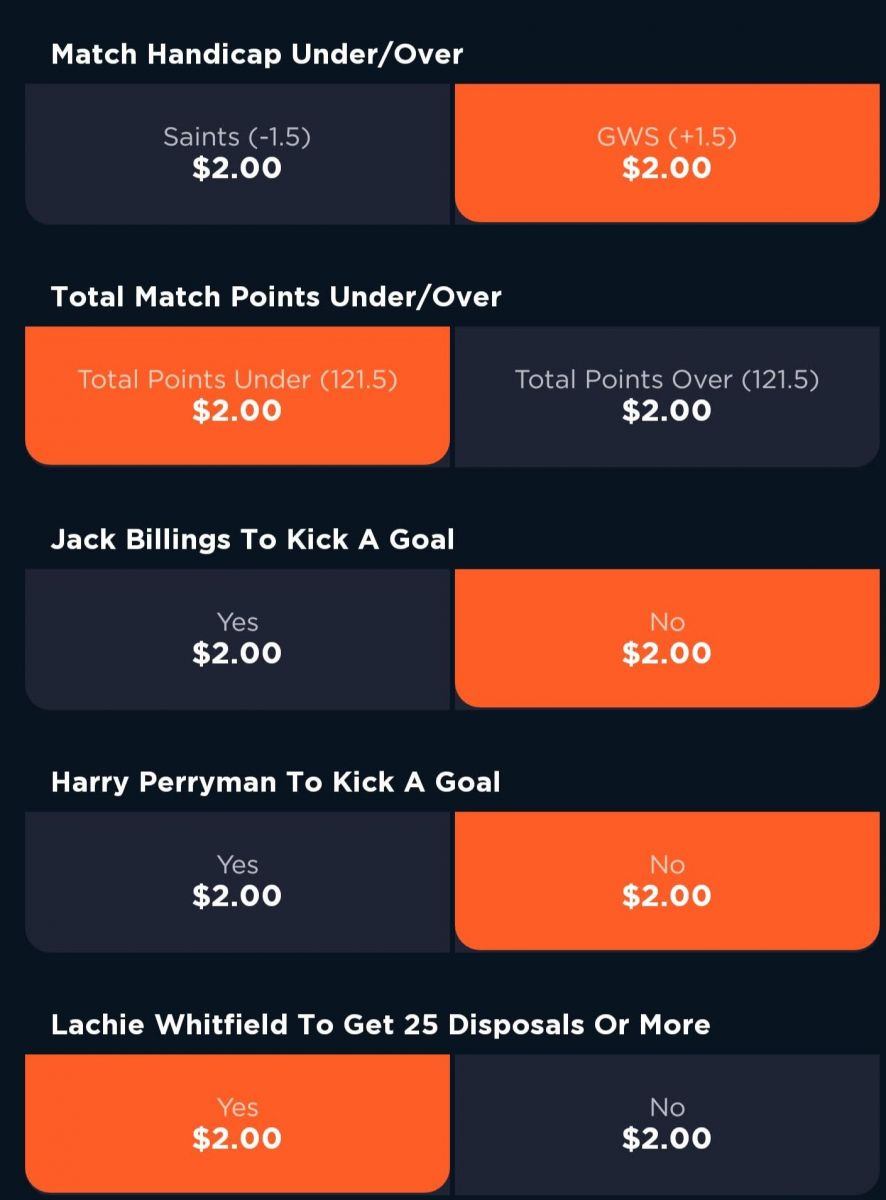 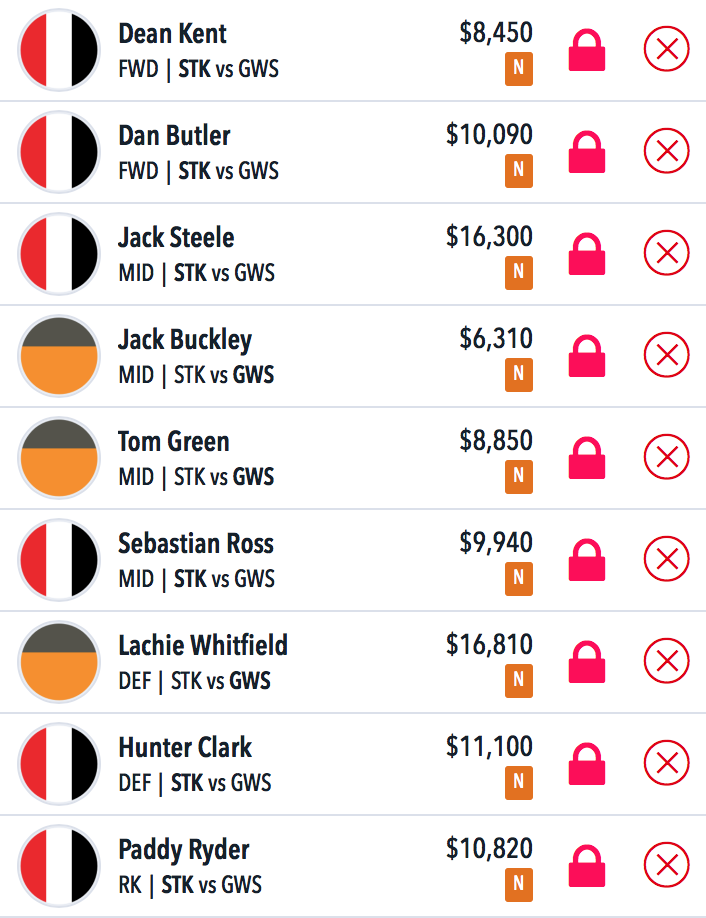 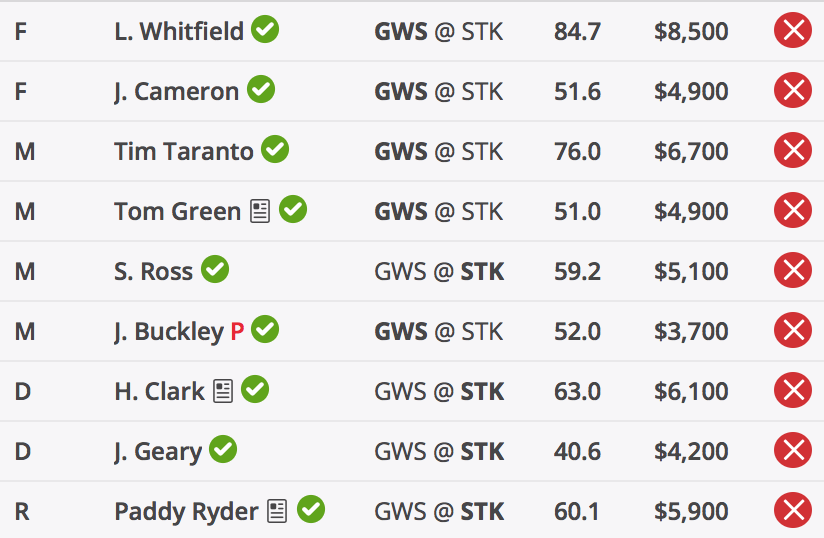