Welcome back! Just short of a three month bye between round 1 and round 2 has been rather unusual to say the least. But that will be the story of the season as we resume the AFL 2020 Premiership Season in a COVID-19 new norm with paper cut out fans and shortened game times. The one constant that will remain, however, is daily fantasy! And I have never been more ready to sink my teeth into breakdowns.

Draftstars have looked after us for Thursday nights opener for round 2 between Richmond and Collingwood at the MCG with a massive $120K contest! Also released by Draftstars on Tuesday:

DraftKings have released their first ever contests for AFL highlighted with the $80,000 Opening Bounce with $20,000 to 1st place (USD)!

Pies coach Nathan Buckley has already ruled out Ruckman/Forward Mason Cox due to his knee injury but is likely to play in the 'scratch' match on Wednesday. Bachar Houli will be given every chance to prove his fitness for the Tigers (Update - Houli will play). UPDATE (Wednesday): Richmond have indicated that Jack Higgins will return to the selected side after his brain surgery in 2019 whilst leaving out Ruckman Toby Nankervis. Ivan Soldo to solo ruck.

It is critical to remember each season is a new year and trends from 2019 aren’t typically going to remain the same. That said, with only one game in the books it is still a great starting point to use last year in gauging what we can expect heading into this contest.

The book on the Tigers' over the past three years from a fantasy perspective has been a fast moving team that doesn’t over possess the football or tag opposition players. This has led to a strategy of targeting the team playing against them. In line with this we can see last year they gave up the most 100+ scores at 4.2 per game, which means we can load up on the Magpies big names.

I will be loading up on Collingwood backs in this matchup. Last year you can see the Tigers gave up the fifth most points to the top three scoring defenders (notably one point less than the Pies), and the trend continued in round one of this season. This is exactly where Collingwood likes to build up their attack and possess the football, I will be looking to link up their defenders in my builds.

Consistent with the trend of conceding big scores the Tigers gave up a massive 110 points per game to their opponents top 3 scoring midfielders last year. This means it is open season on the Pies bolstered engine room. With Adam Treloar out for this matchup, there will be a significant gap to take advantage of as someone will have to pick up his rotation through the middle.

Mason Cox is out, this opens the door for Cameron to play back-up ruckman but his role will be up forward. Cameron scored 107 fantasy points (20 min quarters in pre-season) against Richmond in the pre-season back in March, although Cameron was the main ruckman that day with Brodie Grundy rested. Having Grundy in the side limits Cameron’s ability to score, however, Grundy who is the most expensive player on the slate is a tough player to roster. If we get 40+ then value can be achieved.

If he retains his spot in the side I will go right back to the well on Brown in this contest. With Treloar missing in round 1 and Brown was the only other midfielder beyond the big three (Adams, Pendles and De Goey) to notch up double figures in centre bounce attendances. He had 12 and managed to put 47 fantasy points, which is decent enough production in less game time.

In my round 1 preview I noted that this season could mark the beginning of the long heralded move to the midfield for budding superstar Jordan De Goey. While he didn't set the world on fire from a fantasy perspective with 61 fantasy points, the move was clear. Without Treloar in the lineup, he attended the third highest number of centre bounces for a Collingwood midfielder with 14. Now as per usual De Goey has not covered himself in glory during the layoff, however that doesn't typically impact his footy and at his price point I will be looking at an opportunity to secure an 80+ fantasy point game.

Interesting whispers from the media that Pickett has been given a new role for the Tigers and that is pinch ruck? Crazy as it sounds, many fans will remember Shaun Grigg from a few years ago successfully doing the exact role. If Pickett is around the packs at stoppages then his potential for fantasy cannot be ignored. Pickett's price on both sites is cheap and will find his way into many lineups.

Believe it or not, Mayne-train might be close to a lock and load for me on this slate. He fits the mold of a player who links up across half back and the wing in a matchup that screams out for the role. He correlates well with other Magpies for game stacks and he has absolutely dined out on the Tigers in the past posting 134 and 104 against them in their two contests in 2019. I will be linking him up with a variety of Magpies backs across the majority of my builds come Thursday night.

I am all about match scripts in single game slates and if you are getting the feeling I will be heavily exposed to the Magpies you are right on the money. Adams is the mid who has historically seen the biggest boost from Adam Treloar being out of the lineup posting a massive +19 fantasy points per game in his last 16 games without Treloar. He also boasts a better price point than the other two big named midfielders for the Magpies in Pendlebury and Sidebottom, which offers a lot more flexibility in the lineup. 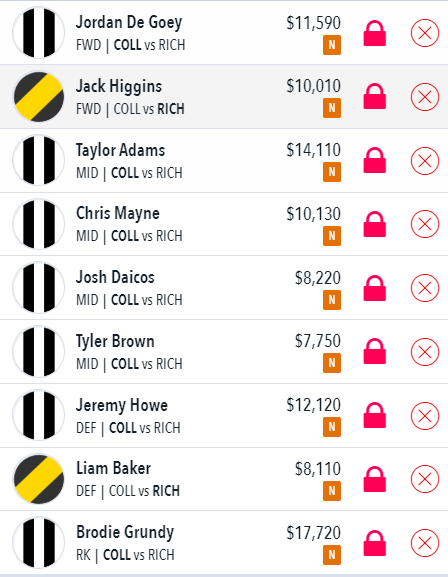