For the second match in Round 2 of the 2020 AFL Premiership Season we are sending Hawthorn down to the tip to face Geelong. The cardboard cutouts should be in a frenzy as these two old rivals face off and us DFS fanatics can rejoice as the monster platform DraftKings will join us in offering AFL contests.

The major contests across the DFS platforms include:

It is critical to remember each season is a new year and trends from 2019 aren’t typically going to remain the same. That said, with only one game in the books it is still a great starting point to use last year in gauging what we can expect heading into this contest.

Defenders against the Hawks was one of the Rolls-Royce plays last season with them conceding the most points in the league to the position. This did not change when you isolated the top three scorers where they were giving up 92 points per player. The sneaky lesser known play, however, is key defenders against Hawthorn. Over the past two years the Hawks structure has continued to give up the most fantasy points to key position backs and I will be piling into that to start 2020.

The Hawks were also liable through the middle last year giving up the fourth most points to midfielders. This is a trend that continued in round 1 of this season where they conceded 100 points per player to the top three scoring opponents through the midfield.

The position to attack the Cats is in the ruck. It is the one position that has eluded them over this recent stretch of premiership contention, and it has translated in a lot of fantasy points for the opposition. This continued in round 1 of this season where Darcy Fort gave up 80 points (the new 100) to the stone aged Sam Jacobs.

Tom Scully (DS $8,910, DK $4,600) has shown flashes of his past self now that he has had a full year under the belt to recover from a catastrophic ankle injury. At this price he is just too cheap, in Round 1 he returned a more than serviceable 58 fantasy points in the reduced game time. The narrow ground down at Geelong is the only question mark for mine.

Mark Blivcas (DS $9,630, DK $4,900) is more a mid-priced play, however it is the correlating I will do with him. As mentioned above I love playing key defenders against the Hawks and with Blivcas you can take some unique options linking him with value plays such as Harry Taylor (DS $7,550, DK $3,900) or Mark O’Connor (DS $8,940, DK $4,200). To give you an indication of what I am talking about last season Blivcas averages 88 points per game in two contests against the Hawks.

Quinton Narkle (DS $9,350, DK $4,200) looks to have moved directly into the midfield from what we saw in the Marsh series and continuing into Round 1 for anyone that can remember back that far. He saw 18 centre bounce attendances in the first match against GWS, and although he managed just 44 fantasy points, I will take that opportunity any day of the week at this price point. He loves the friendly confines down in Geelong and should bounce back in this role.

Joel Selwood (DS $12,580, DK $6,200) is the other player who looks set to return to more of a traditional inside role now that Tim Kelly has fled West. He looked to be moving more like his old self in Round 1 and has since had another long layoff to get the body right. Selwood attended 26 centre bounces in their first game and returned 62 fantasy points in a game where the Cats were choked all night.

Tom Mitchell (DS $15,100, DK $9,000) is hard to ignore at this price (unless you are playing on DraftKings). He was solid but not incredible in his first hit out of the season and since has had another 3 months to get himself right after a broken leg. But with an upside of 140+ I quite like the ground for Mitchell given the narrow size and high amount of contested football we can expect to see. 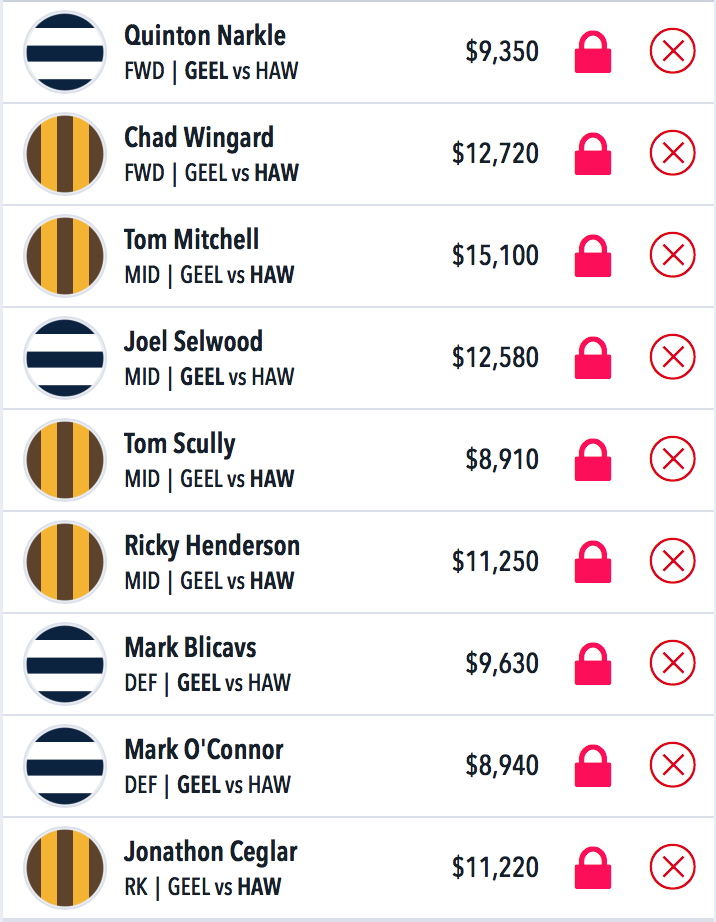