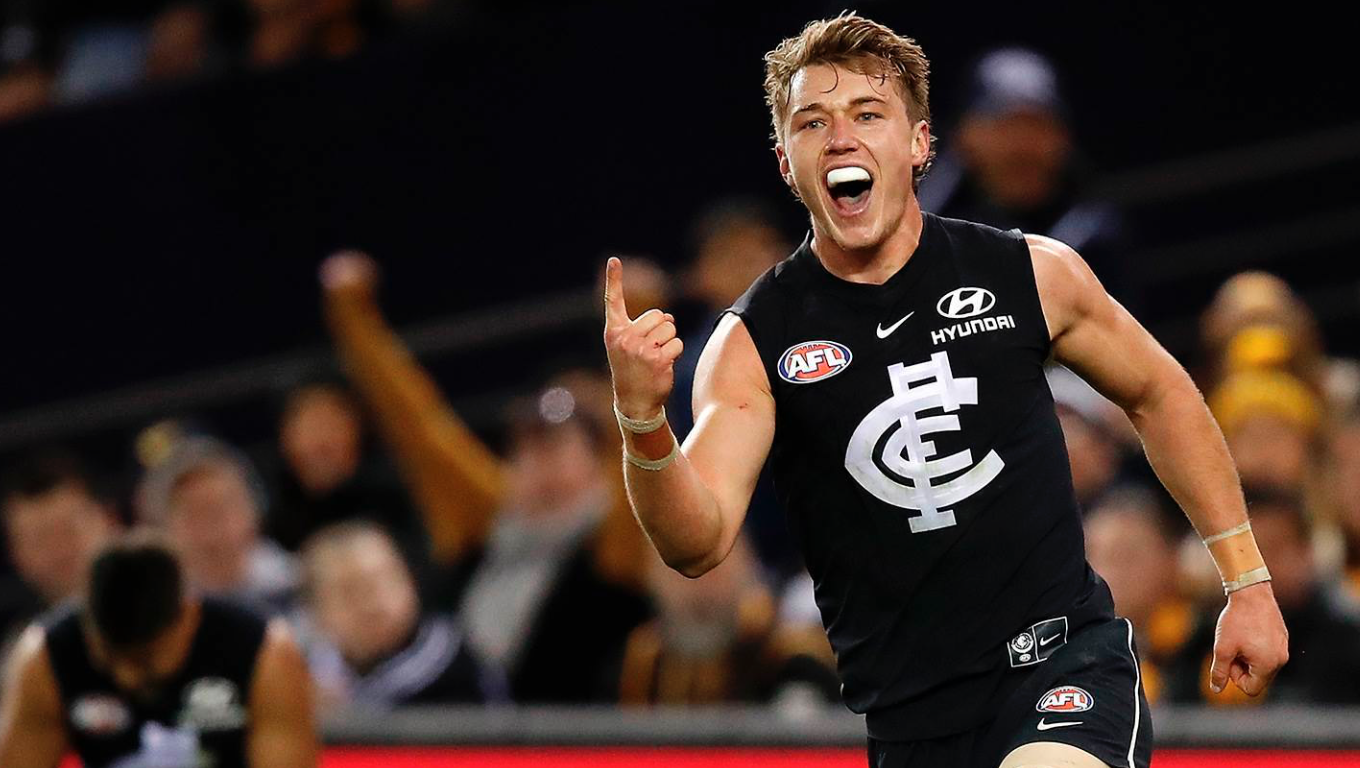 Time to really dig in and get into the first multi game slate post COVID-19 as super Saturday gets underway with 4 games to break down. For all us DFS lovers the major platforms have a number of massive DFS contests on offer: 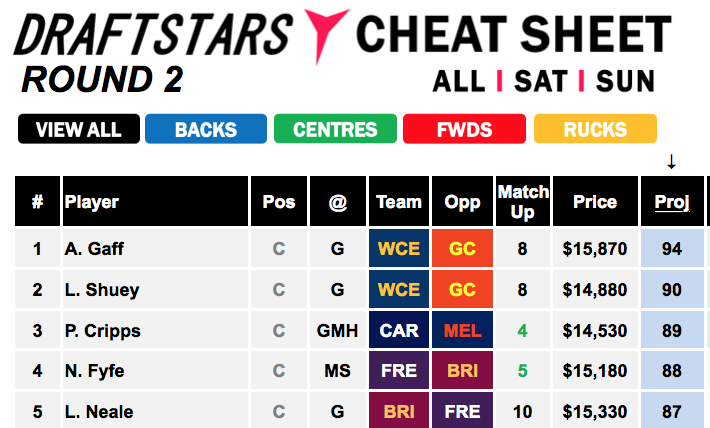 Obviously each season is a new year and trends from 2019 aren’t typically going to remain the same, that said with just the one game under the belt so far it is still a great starting point to gauge what we can expect heading into this day of games.

One factor to note today is the weather in both in Queensland and Adelaide (especially Adelaide). Rain and wind is forecasted in Adelaide whilst Brisbane/Gold Coast could experience showers.

Plenty of the league's best teams to targets on this slate with Gold Coast and Carlton conceding the most fantasy points in 2019. The Suns particularly continued this trend way back in Round 1 this year where they gave up the biggest fantasy score of the round. West Coast are over 5 goal favourites and will be a popular option for game stacks on this slate.

Through the midfield was the place to load up against the Suns and the Blue last year where they gave up a monster 119 and 114 points respectively to their oppositions top 3 scoring players at the position. Don’t be shy in attacking Melbourne through the midfield either, they conceded the third most points to top scoring mids last year, and this trend continued in round 1 of 2020 where they gave up the second highest mark of the round.

Max Gawn in the ruck looks to be the ideal setup on this slate as he faces the Blues who gave up the second most points to opposition number 1 rucks last year. Meanwhile avoid at all costs ruckman facing Melbourne, Port Adelaide and Brisbane, which on this slate doesn’t leave too many options. If you aren’t keen on Gawn, I would be looking to pay down at the position for this slate.

This bloke might be the most popular play on this slate. After a season in the SANFL last year without making his AFL debut he is finally due. He should see some exposure through the middle and has already shown he can score at a senior level averaging 81 fantasy points in the SANFL in 2019. At the bare minimum in short games he won’t need much more than 40 fantasy points to return value.

Appeared to be rated highly pre-draft before falling all the way to 32 it is no surprise to anyone to see Rivers debuting so early. He plays a fantasy friendly position across back where there will be opportunity to rack up uncontested +6’s, particularly with his clean skills the Demons should look to get the ball in his hands at every opportunity.

This will be a trend for me over this round. If you can remember back to round 1 I piled into Hugh Greenwood without much success. However, as always I won’t let that result deter me, rather I will back the truck up over it and pick up the advantage of a lower ownership. Hugh was recruited to play in the pivot for the Suns and in round 1 saw the third most centre bounce attendances with 11. Will Brodie has been dropped this week, which should also bump up the midfield time for Hugh. He also notched up 79% game time, which is higher than his average in the past three seasons.

This is my second back the truck over it. Like Greenwood I tipped Aish in round 1 and he seriously let me down. That said the clear role through the middle was there, he just failed to capitalise. Playing on the wing Aish will be given every opportunity to score fantasy points on the outside, something he wasn’t fully given with the Magpies. Just remember, in the only preseason game he suited up for he had 12 of the 22 center bounces and posted a 100 point game racking up 24 disposals.

Boy oh boy... this man looks to have arrived. He was trialed through the middle during the Marsh series and returned monster results. This continued on into Round 1 where he attended 23 centre bounces and returned 90 fantasy points in a loss the West Coast Eagles who are notoriously difficult to put up fantasy points against (particularly over at Subiaco). This round Petracca will face a much more fantasy friendly opponent in the Blues who gave up the second most points through the middle last season (as noted above). This is a lock and load play for me on this slate.

Cripps is just too cheap on this slate in my opinion. He posted a solid 92 in Round 1 in a loss against the Tigers, and on this slate, he faces Melbourne who as highlighted above sneakily gave up a massive amount of points to the top scoring opposition midfielders last year. He hasn't faced Melbourne since 2018, however when he did, he posted a massive 140 points.

Eagles stacks will be the play of the day on this slate, and my first point of call for these builds will be Luke Shuey. He was absolutely prolific in Round 1 against Melbourne posting a massive 116 points in the short game time. With the newly structured midfield at West Coast, Shuey should have the most certainty over his midfield time. On this slate he faces the Gold Coast Suns who have given up the most points to midfielders in the league for the last two seasons.

Often a popular option in DFS, I will be staying clear of Fyfe on this slate. He has a tough matchup on the road against the Lions who allowed the 3rd fewest fantasy points last year. In addition, Fyfe has been playing significant portions of time up forward through the Marsh (pre-season) and then into round 1 where he posted 89 fantasy points (not enough for GPPs at this price).

West Coast Eagles - they are 5 goal favorites against the team that has given up the most fantasy points in the league over the past 2 years and continued to do so in round 1 this year. The Eagles continue to possess a fantasy friendly game style of possessing the football, with the only risk being the impact of playing away while living in the Hub. 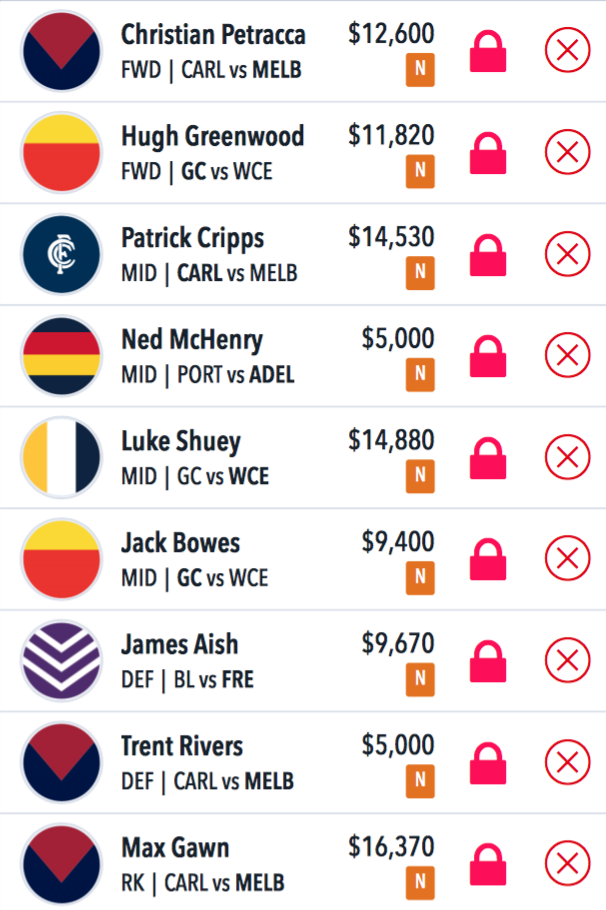