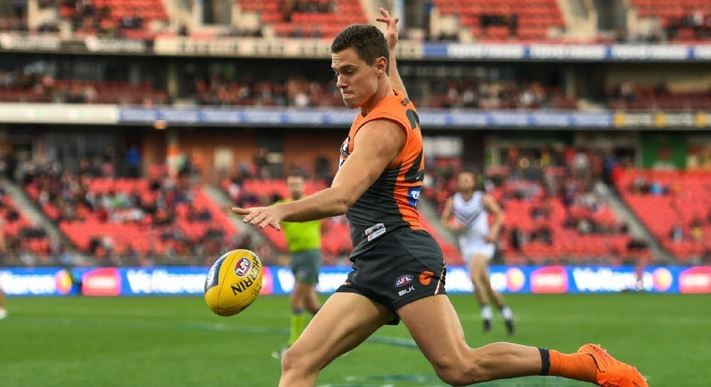 Hopefully you have been tearing apart the daily fantasy this round, buf if not there is still time to turn it around with a 3 game Sunday slate! For all us DFS lovers the major platforms have a number of massive DFS contests on offer: 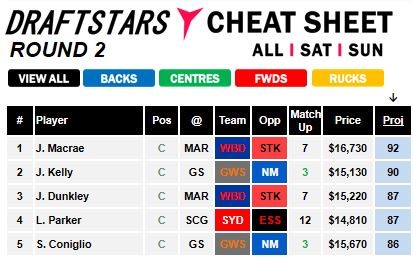 Obviously each season is a new year and trends from 2019 aren’t typically going to remain the same, that said with just the one game under the belt so far it is still a great starting point to gauge what we can expect heading into this day of games.

Targeting the Saints across the back line has been a very tasty proposition going back into last season. This should suit the Western Bulldogs perfectly as they seem to have a team full of half back flankers. I will certainly be looking to link up combinations of Bulldogs backs across the majority of my teams on Sunday. Not only is it a positive matchup, but the Dogs averaged +9 marks per game at home last season, which meant they got their uncontested style of game going much more prolifically.

An unusual slate from the perspective that there really isn't any team that stands out to attack through the midfield. GWS and the Western Bulldogs were the two stingiest teams in the league from a fantasy perspective for midfielders last year. Essendon, Sydney and North Melbourne look like the better teams to attack and I will certainly be heavily exposed to GWS midfielders with the Giants coming in at 19 point favourites (this seems light).

Normally the ruck decision is a given when the Western Bulldogs are on the slate. However, with the Saints adding Paddy Ryder in the off season there is a lot of confusion hanging over how much ruck time either Ryder or Rowen Marshall will play. The Giants gave up the second most points to the position last year, however they brought in Sam Jacobs to sure things up. Targeting the Bombers looks the best bet and I do quite like Callum Sinclair’s price.

Speaking of the half back at the Western Bulldogs, they have brought in another one just in case the 17 they already had wasn't enough. Laitham Vandermeer is a speedy rebounding defender with a laser boot and should be able to take advantage of some slow build up across half back by the Bulldogs. I will use him for cost relief along with Bailey Williams who is playing a similar role and posted a 67 in round one, which is more than enough value at his price point given the shortened game time.

Coffield really stood out towards the end of last season as a player to watch. He posted three straight scores of 82, 84 and 69 through rounds 18-20, before notching up over 30 in less than a quarter and going down injured in round 21. He has returned straight back into the team after this long layoff and this is likely to be an opportunity to get the jump on opponents as I expect him to have a low ownership.

Will likely be a popular value play on this slate. He came in as a high draft pick last year with massive raps and looks to be replacing Tom Green who attended 16 centre bounces in round 1 for the Giants. Now GWS are back at full strength and given how loaded they are through the midfield and the fact they generally use a full time tagger there might not be a lot of opportunity for young Caldwell to run through the middle in these shortened games. That said I fully expect the Giants to smash North Melbourne, which opens up the chance for junk points. He has shown capability to score, notching up 72 points in his first career AFL game last season.

This is a pure GPP play here, with Membrey capable of going for 100+ (even in a shortened game), however we also saw the downside in Round 1 where he posted a score in the 30’s. During the preseason he was pushed much further up the ground, which increases his fantasy scoring opportunities, but I also love playing key forwards against the Bulldogs.

I tipped him in Round 1 and will be going right back to the well again in Round 2. It was not surprising to see Jy attending the third most centre bounces in North Melbourne’s first game with his move the midfield becoming complete. He responded well returning 89 points (massive result for the shortened games) and although this will be a much tougher opponent in GWS I will continue to take the opportunity over the opponent.

I will be looking for a forward to cap off my GWS stacks and Jeremy Cameron will be my most used. He averaged 102 fantasy points per game at GIANT Stadium in 2020 and as I mentioned above, I think the Giants will have a field day against North Melbourne in this matchup.

Kelly has to be one of the league's safest plays week in and week out. He has the capacity to go massive with 150+ point scores, while rarely ever ruining your day. Last year it took 11 games before he went under 100 points and in the shortened game of round 1 his 80-point score is pretty much the floor you can expect.

While I am extremely big on the Giants on this slate we still have to make hard calls. I will draw the line at Stephen Coniglio who will likely spend a lot more time forward given the Giants now have a full array of midfielders to choose from with the return of Callan Ward. 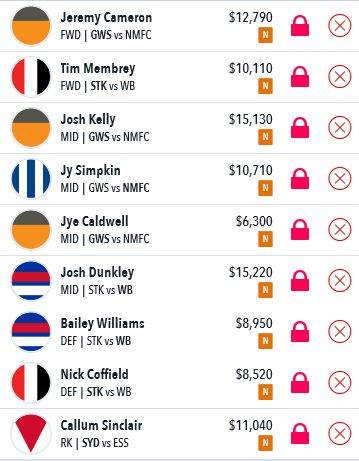