Things are well and truly cooking again after a very successful return to football on the weekend. The DFS competitions went to the moon and the options were plenty after newcomer DraftKings entered the arena! Round 3 of the AFL Premiership Season is here and we kick things off with an old-fashioned Victorian slobber knocker at the MCG between Richmond and Hawthorn.

There are some massive contests for this week’s Thursday’s slate: 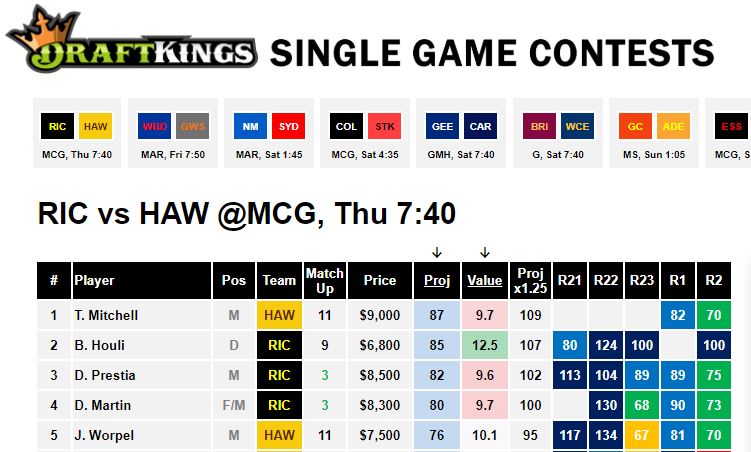 It is critical to remember each season is a new year and trends from 2019 aren’t typically going to remain the same. That said, with two games in the books it is still a great starting point to use last year in gauging what we can expect heading into this contest.

As we flagged last week the book on the Tigers' over the past three years from a fantasy perspective has been a fast-moving team that doesn’t over possess the football or tag opposition players. This has led to a strategy of targeting the team playing against them. In line with this we can see last year they gave up the most 100+ scores at 4.2 per game. This is not a trend that has continued so far in a small sample size for 2020, however, I will back in the past history and still be loading up on the Hawks.

The Hawks were the number one team to target with defenders last year, particularly the high scorers giving up 92 points per game to the top three opposition backmen. Although we have a small sample size for 2020, I will be filling up on Richmond backs, including key defenders as Hawthorn’s setup has continued to give up the most points in the league to bigs over the past two years.

Loading up on the Hawks midfielders didn't work out last week down at the Cattery, however I think back at the MCG they will bounce back. Consistent with the trend of conceding big scores the Tigers gave up a massive 110 points per game to their opponents top 3 scoring midfielders last year. Give me all the Mitchell, Shiels and Wingard I can get!

I will look to Grimes in GPPs to take advantage of key position backs vs Hawthorn. It has become a tried and true method over the past two seasons and last week we once again saw it strike with Harry Taylor popping up for a 64 point game. I will certainly be link-in Grimes with other Tigers defenders from the likes of Bachar Houli all the way down to Liam Baker. Grimes certainly brings GPP winning upside, topping the 100-point mark last season in addition to another 5 games of 67+.

The COVID-19 rest certainly gave the captain no problems as he looked like the Trent Cotchin of old in patches last week against the Pies posting 86 fantasy points and spending the majority of time in the mid field with the second most centre bounce attendances behind ruck man Ivan Soldo. The Hawks gave up the sixth most points to midfielders last season and to start 2020 have continued to look like a team that can be taken advantage of at this position as they got decimated at the stoppages last week losing the clearances by 18.

The Worpedo really became one of the better fantasy players to close last season posting 7 100+ point games from his last 11. He hasn't blown the doors off to start this year, which means we can look to target him at lower ownership on this slate. He posted over 100 points against the Tigers last year and the return of Tom Mitchell has not limited his opportunity as he continues to be in the three most heavily used midfielders (19 centre bounce attendances vs Geelong).

Boy oh boy it is hard to come at this price point for Houli in the shortened quarters. That said, he is truly capable of topping the 100-point mark as we found last week despite games being 20% shorter. This is the top matchup in the league for his position and he has averaged 101 points per game over his last three matches against the Hawks. From his last 12 games at the MCG he has posted an insane 110-point average with just two scores dipping below 100. I will be as heavy as it gets on Houli and linking him up with other Tigers defenders in the majority of my lineups.

Full disclosure… the way my fades have been going you might be better off using this as a lock and load. That said I will be running with the idea that Liam Shiels will go from a hard role on Dangerfield right into Dustin Martin. In shortened quarters it doesn't take much to have your score snuffed out and in this matchup I will be willing to risk Dusty. Martin is out of the Tigers side due to Rib Sorness. If I was going to pick another fade, Tom Mitchell especially at $9,000 on DK is simply too much for his early form so far. However still must be respected on Draftstars ($15,120). 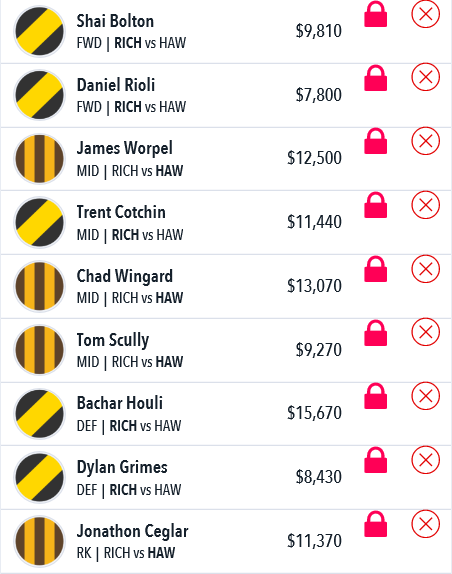 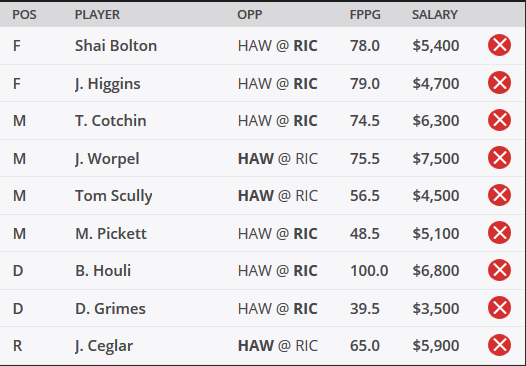