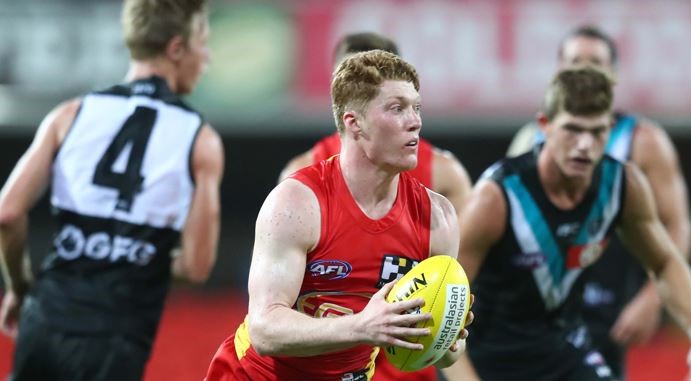 A dramatic day yesterday saw the Essendon vs Melbourne clash postponed due to a positive COVID-19 test. As a result the Sunday Slate has been reduced to just the two games, but that won’t stop us diving into daily fantasy.

There are still massive games on offer across the major platforms:

Fremantle and Adelaide have both been getting decimated by defenders from a fantasy perspective this season. While we are only two games into 2020, this is a trend that has continued on from 2019 where they were both top 5 for most points conceded to backs. I will be looking to load up on Port and Gold Coast defenders through my teams on this slate (take note, this is going to be a trend).

Once again Adelaide and Fremantle have given up a high amount of points through the midfeild, particularly to the opponents top 3 scorers at the position (both 92+ per player). Despite their upset win over the West Coast Eagles last week, the Suns also continue to have large fantasy scores posted against them through the middle, which is a trend that is consistent with last year when they gave up the most points in the league. Port Adelaide on the other hand have conceded the fewest, which means lets stay away from Dockers on this slate (dare I say fade Fyfe again?).

Despite it being only two games I had to highlight how much the Crows have been destroyed by opposition forwards so far this season. They are giving up almost 10 points per game per player to the next highest. The Crows have certainly looked like a bottom four side so far this year and it might be best to jump on this early trend now.

A speedy half back who is playing his first game for the season. He hasn’t been a big ball winner at the SANFL level so far in his career averaging just 10 disposals per game at that level in 2019. That said at basement prices with the opportunity for cheap possessions and only needing 35-40 in shortened quarters I think he is certainly an option to provide salary relief.

The old “cannon” boot has once again popped up at AFL level taking advantage of the injury to Ryan Burton and looking at home in the Port Adelaide back line. McKenzie has often showed capability of scoring fantasy points when getting the opportunity, and I love him in this matchup against Fremantle who have given up the second most points to defenders through 2 games this season (as noted above a trend that has continued on from last year). Through two games this year his low score is 61, which is value at his price in shortened quarters, and this is likely his most optimal matchup so far. I will be linking him with plenty of other Port Adelaide backs through my lineups.

This is my GPP special. High risk here, but Sexton can pour on the goals in the right situation. As I noted above the Crows have been getting smoked by forwards this year, and amazingly the Suns are actually favourites in this game. If you look at last week you will notice that Sexton managed 47 fantasy points while kicking 3 behinds, if he can straighten that up there is the possibility of a real score here.

I have been hammering this drum all season and last week he came off at seriously low ownership, helping me bag a number of big results on DraftKings. I will be right back to the well until that price rises enough. Playing on the wing Aish has every opportunity to score fantasy points on the outside, and he capitalised on that last game with a massive 87 points (a huge score at this price point in shortened quarters).

Once again Lycett will be my ruck choice on this slate. I don’t really want any part of the Witts vs O’Brien matchup as both are tough opponents. Meanwhile Lycett will get the ruck against Rory Lobb who is a slighter build than most ruck man and historically has conceded a lot of fantasy points. As I noted last week Lycett is now free to sole ruck and it paid off with 90 fantasy points against the Crows.

Wow! In what was arguably the best second career game in the history of the AFL this guy absolutely monstered what many considered to be the best mid field group in the league last week. Posting a massive 108 points he now draws one of the best matchups in the league for midfielders against the Crows. Lock and load!

Hard to find tasty premium plays on this slate. If you are just playing the Power vs Dockers game I think I’d look to Nathan Fyfe even though it looks to be a tough matchup. On the entire day, however, I think Crouch will be due for a big score against the Suns who have been the best matchup for midfielders over the past two years. Crouch posted 87 fantasy points in a massive loss last week, this game should be more competitive and it wouldn't surprise me to see a three figure score from him for the first time this season.

Rocky will be popular on this slate as he has started the season in great form. I will be laying off him, however, as with Ollie Wines back in the rotation it is likely that he sees a reduction in midfield time and ball. 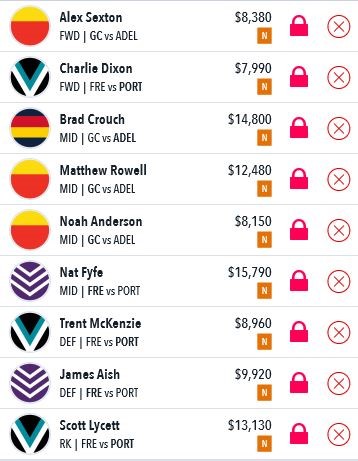 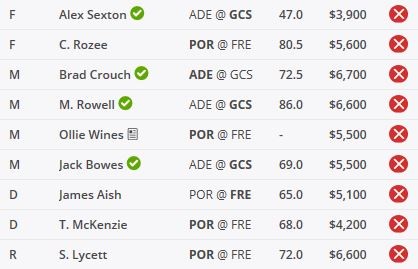