Preseason this Friday night would have been with two of the year’s contenders, however both the Bulldogs and Giants are now coming off major upset losses in Round 2 and will be looking to try and salvage the season. The two sides will meet at Marvel stadium and once again there are a wide array of daily fantasy games available across the major platforms: 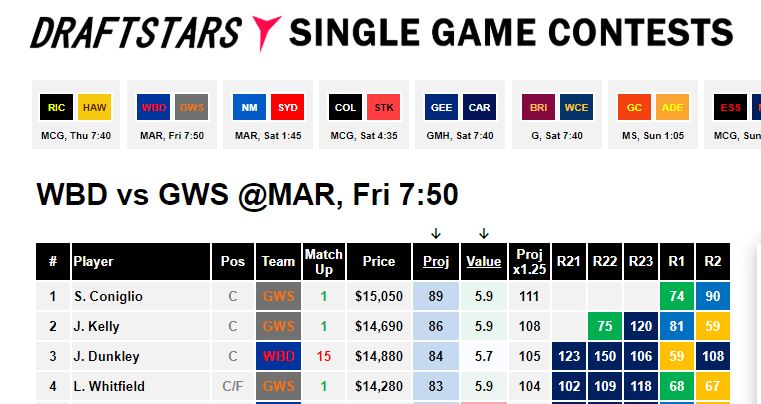 There has been a huge turnaround from the Bulldogs through the first two rounds of 2020 compared to last year. In 2019 the Bulldogs were one of the toughest teams to score against in the league, while through 2 rounds in 2020 they have given up the second most fantasy points. Meanwhile the Giants, who were also extremely stingy in 2019 have been closer to league average so far in 2020.

Not surprisingly based on above, the Bulldogs have been sliced up through the middle this year. This has been especially true for the top scoring midfielders with the top 3 scorers averaging over 100 points per game, which is an enormous score in the shortened games. Meanwhile, GWS have continued on their trend of being tough to score on through the middle despite losing last week to North Melbourne.

One thing that has not changed from last year is that Tim English is the number one player to target in the ruck. Through two games he has given up 96 points per game to the opposition number 1 ruck, which is 10 points per game higher than the next highest. In second place, similar to last year, is English’s opponent in this match, Sam Jacobs and GWS.

Josh Kelly has been ruled out for tonight's game. Emergency Jackson Hately takes his place

Bailey is still nicely priced under 9k for a player averaging 62 points through two games of the shortened season. He has a fantasy football friendly roll across half back and while he didn't blow the doors off last week and I am extremely comfortable to go back to the well as a value play in a single game slate.

I tipped his last round and it paid off with a 54 point performance and I will go back to the well again this week assuming he holds his spot. As I mentioned last week he gets opportunity through the midfield with 7 centre bounce attendances and so far has shown ability to put up points at AFL level. It is looking like a dream matchup for anyone in a Giants uniform at the moment, particularly those playing through the midfield and up forward, which is where Caldwell spends the majority of his time.

The 1st round Draft pick from the Murray Bushrangers averaged 97 FPPG in the NAB League playing across half-back. He co-captained the Vic-Country team in 2019 and is highly touted as a future leader. He racked up intercept possessions throughout 2019 and looks to be incorporated into the Giants setup with the likes of Zac Williams, Heath Shaw and Lachie Whitfield still in the team. Hard to ignore at his opening price.

I hate to go against my boy Tim English, but all signs are still pointing to him being the easiest target for rucks in the league as noted above. Furthermore, Sam Jacobs has recent history against English from when the Crows faced the Bulldogs in Round 23 last season. Jacobs put on a ruck domination with 58 hit outs and 115 fantasy points. He just monstered English in the contest, and unfortunately through two games there has yet to be any evidence that something will have changed in this regard.

So far has burnt me this year, but this isn't the time to get off. If the Giants are able to run riot on the Bulldogs like their opponents have through two rounds I will be after GWS stacks that are rounded off up forward by Jeremy Cameron. He has yet to get hold of a team yet this season, but I love playing key forwards against the Bulldogs and they have given up the second most points to forwards through two games this season.

I love the Hopper play at the moment. He is not as popular as Kelly, Coniglio or Whitefield, however he has a more certain role through the middle at the moment. He has been one of the top players in centre bounce attendances for the Giants this season with 17 in Round 2 (behind only Jacobs and De Boer). He has 100-point upside still in the shortened games and sits at a price point below all the big names. In what has looked to be the best matchup for midfielders in the league across a small sample this season, he is a total lock and load play for me.

This is the obvious call on this slate. Matt De Boer has been the best tagger in the business for the last year and when these two sides met last season, he went to Bontempelli. This happened twice towards the end of the season in Round 22 and then again in the Elimination Final. In the Round 22 game the Bulldogs won by over ten goals, however The Bont was still held to under 100 fantasy points, behind Macrae, Dunkley and Lipinski. In the final he was well and truly squashed in a Giants wind barely going past 70 points. 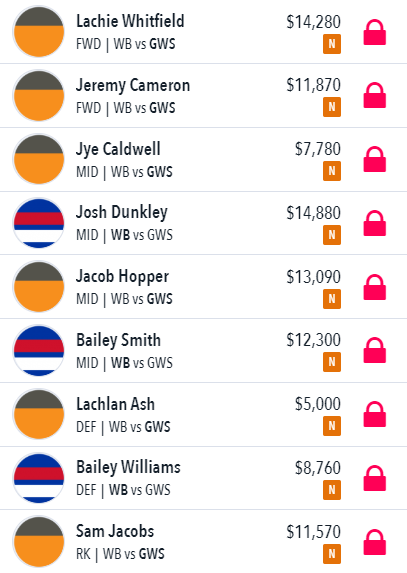