It is almost do or die time for the Giants if they are going to live up to preseason predictions in 2020. GWS host Collingwood, who are sitting pretty in second spot at the moment and have been one of the form sides since the return from the COVID-19 break.

Once again we are loaded to the brim with daily fantasy contests across the major platforms: 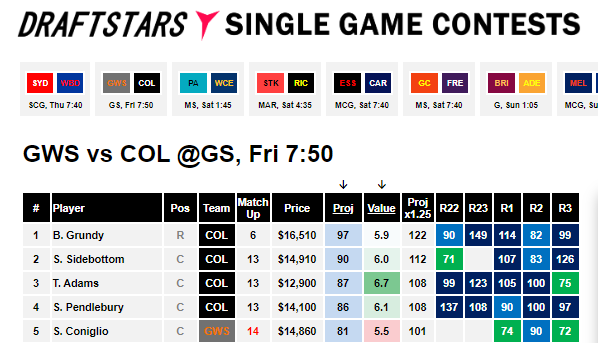 If anyone saw what DFR’s own Fantasy Boss crew did last weekend you will know that defenders against the Magpies is a real thing. They should know, they put together this data and it paid off massively loading the Saints backs last week. This week we can take that strategy and apply it to the Giants, linking their defenders in teams will be the popular way to go.

Both teams have been especially stingy to midfielders this season. This is not surprising as GWS were one of the toughest teams to score against last season. It raises the question of whether spending up in this environment is a bad strategy. With both sides limiting the top three scoring midfielders to an average of 80 points per game, it may be better to target mid priced plays as value for dollar. Save your money for the big fella!!

Oh boy! We got the dream scenario here. While Sam Jacobs was meant to patch up the ruck position that has been a constant issue for the Giants there was just one thing missing. Poor old Jacobs is more cooked than the single dim sim sitting in the bain marie after the last race. Jacobs has lost his spot in the side and that role has gone to Shane Mumford.  Looking back at Mumford's work in 2019 only had 25 FP in Round 19 and then was smashed in the Prelim final by Grundy. On a slate where all signs point to a tough game for premium midfielders, I will be piling into Grundy along with 80% of the field.

This is one of those single game slate GPP specials. Look for the area to target and load in a value play at that position who is not your typical DFS play. It worked last week with Grimes against the Hawks and now we will try it with Taylor against the Pies. As I mentioned at the top Collingwood have been allowing bunches of points to backs this season and Taylor has shown he can put together a GPP winning score (posti9ng a 64 last week against the Bulldogs). I will be pairing him with any number of Giants defenders and hoping they link up as the Giants work it around the back line to setup their attack.

Each week on I am back onto this kid. As I have said week in and week out he looks to be their most consistent midfielder in terms of opportunity. He is regularly number one in center bounce attendances after you take out Jacobs and De Boer and this continued last week where he had 13 CBA’s for 72 fantasy points in a losing effort. Even more attractive is his price, which doesn’t get out of the mid-range tier meaning a lower scoring night won’t hurt you as much and giving you better opportunity to build around Grundy in the ruck.

Set and forget on this one. Grundy posted a ridiculous 181 points last year in a win against the Giants (against Mumford), but the resistance shouldn’t be any stronger this year. This year he is posting 98.3 points per game in shortened quarters (equivalent to 118 per game) and this game environment is an opportunity to set a season high score.

The De Boer effect is always the easy fade on a slate with the Giants. Last year De Boer only played in the final against the Pies and in that contest he went to Pendles and held him down to a degree for 90 fantasy points. So far this season he has conquered the Bont (72), Cunnington (57) and Dangerfield (40), making it an easy call to avoid his opponent. 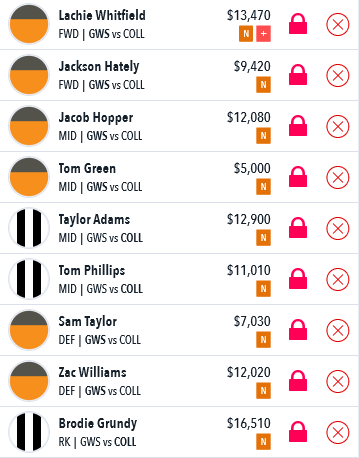