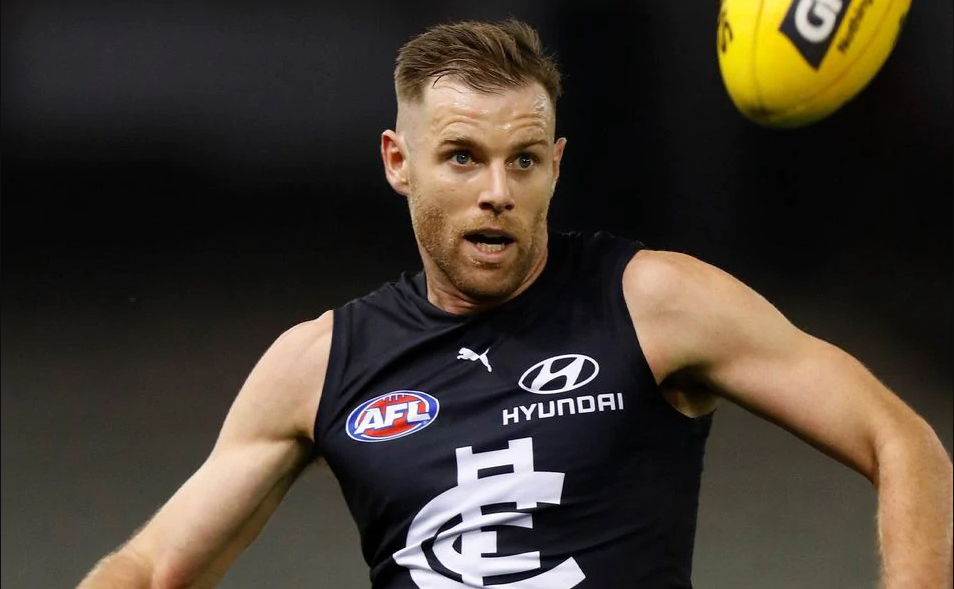 YES! The weekend is upon us, which as you all know means my favourite DFS day of the week is here. Super Saturday features a massive 4 AFL games and a wide array of massive daily fantasy contests on offer:

Richmond and Fremantle are the likely targets on this slate for defenders. Both sides have historically given up points to the position and that is a trend that we are seeing continue this season as they site 4th in 5th for high scores conceded to backs.

We pointed out here that West Coast had been getting smoked through the middle last week and that piling into the Lions midfielders was a priority. That came off as Brisbane midfield stacks cleaned up the day. Once again we should be looking at that angle as the Eagles face Port Adelaide at Metricon. As usual there is a slight possibility of a shower, which would suit the Power. But overall it just appears like the hub and COVID-19 break has taken a significant toll on the Eagles. They haven’t been able to get their possession game going and as a result contested midfielders are getting on top of them.

The Tigers will return Toby Nankervis this week to try and turn the ruck situation around. As we know from the past, however, it should not make much difference as the Nank has been a big conceder of fantasy points over his career. The challenge in targeting him will be the fact that the Saints are splitting the role, so the upside really isn’t there. This leads us onto Fremantle who are slightly behind the Tigers giving up 78 points per game to the opponent’s number 1 ruck, meaning it might be a Witts weekend!

If you pay attention to the winning lineups you would have noticed that this combination worked wonders last weekend. Carlisle notched up a huge 88 points, while Howard had 67. The Saints follow up from the Magpies with another positive matchup for defenders against Richmond so it we can certainly go back to the well. I like linking either one of these guys to other St Kilda defenders as well such as Nick Coffield or Hunter Clark.

Making his debut for the season Hill certainly looks good value at this price point. He has been playing across the half back for Fremantle through the preseason and apart from an injury decimated season in 2019 he hasn’t averaged under 70 points since 2012. Hill be one of the chalkier plays on the slate and almost looks like a lock and load play at the moment.

Alongside Hill will be rookie Caleb Serong making his career debut for the Dockers. He was a drafted with the 8th pick and had massive wraps throughout the preseason turning several heads in interclub games and the Marsh series. In their two preseasons games he was able to rack up points quickly despite limited game time (46 in 56% game time, and 17 in 20% game time), which indicates he should be able to pay off his near minimum price point.

This is a lock and load on this slate for me. I know I mentioned attacked Toby during at the top, and while this is generally a good approach, when you see his price he becomes a no brainer. His last three seasons have seen averages of 78, 89 and 87, and this round he will have the ruck duties to himself, which means we should see somewhere in the vicinity of 100% game time. In addition, despite going against two rucks the Saints have still conceded their fair share of fantasy points this season at 77 per game to the oppositions number 1 ruck.

I think I have said everything I can say about Aish already this season. I am more than comfortable playing him as a wingmen at this price. I think you can get a great ownership this week after he failed to really hit expectations last round and despite the fact Gold Coast are at maybe their high point of franchise history it isn’t stopping teams from being able score fantasy points on them.

Wines returned with a boom last week posting 86 points in a relatively low scoring encounter fantasy wise. He took ownership of the center square and inside role for the Power and on this slate, as I mentioned at the top, he faces an Eagles team who is getting absolutely decimated through the midfield. Wines is also the type of contested beast that gives the Eagles trouble as seen by the 35 touches and 116 fantasy points he gave them last year in wet and slippery conditions.

Docherty has returned and got right back to fantasy consistency. Posting 3 scores of 95, 88 and 97 so far you can almost guarantee a 90+ game and I love him at the MCG. Like the Suns, Carlton are probably as high on things as they have been in some time and will be coming out all guns blazing in this rivalry matchup against the Dons. It is a solid matchup for defenders as Essendon have conceded the 6th most points to top 3 scoring back this season. 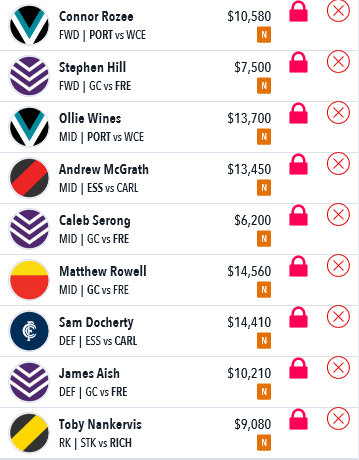 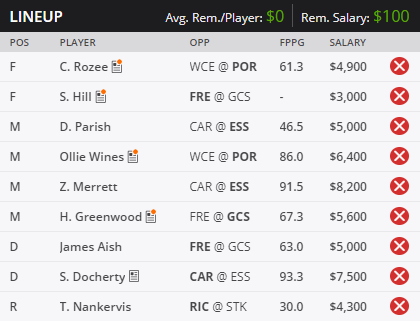