Let’s get it going again as we make it to Round 4 of the 2020 AFL Premiership Season. Kicking things off this Thursday night we head off to the SCG where the Sydney Swans will host the Western Bulldogs. Once again, we are loaded to the brim with daily fantasy contests across the major platforms:

It is fantastic to see the growth of DFS pools on Draftstars and the site has gone another step higher with the introduction to the $10,000 prize pool for the $2 mini. The contest is for casual players only, yet the entry limit has been increased to 50 max. This is a great move considering you can play with players at the same skill level!

Premium midfielders aren’t much different with the Bulldogs conceding a massive 96 points per player to the top three scorers. In the shortened quarters that is a monster score. Against looking midfielders that rack up uncontested possessions is the goal.

No surprise to see forwards also feasting against the Bulldogs. This has been a long time trend, particularly for key forwards.

Blakey has been pushing up the ground a bit this year, however he is yet to totally take advantage. So far this season he has yet to kick more than a single goal, however the Bulldogs have been one of the better teams to target for forwards over the past season and bit. This is particularly true for key forwards.

Please note the pricing difference between the sites, particularly when looking at value options. On DraftKings I like James Rowbottom ($4,600) and Mitch Wallis ($4,800).

Timmmmy! He started to build a bit of form against the mummified Sam Jacobs last week posting his highest score of the season with 78 points. On this slate he draws another plus matchup against Callum Sinclair who was absolutely destroyed by Todd Goldstein last week. He is much better priced on DraftKings where I will be locking and loading!

McLean will likely be chalky this week, which means there is certainly scope for a fade as his floor is in the basement if he is not played in the right role. He played a forward role last week but certainly pushed up the ground and looked in solid form posting 62 fantasy points (died in the second half after 50 in the first). With Josh Dunkley now out the Bulldogs will need someone to replace their most frequently used midfielder in the centre (13 centre bounce attendances last week). McLean is a possible option and we have seen his fantasy scoring potential when he is set loose after averaging 94 points in 2018.

Florent is the man of the future at the Swans. He has fast become their most commonly used midfielder in the centre with 19 CBA’s last week. His scores are naturally rising as well, averaging 77 points in the shortened quarters, with a season high of 90. The Bulldogs have given up the most uncontested possessions in the league this year and Florent feasts on these averaging over 14 per game.

Continuing with the theme of uncontested possessions we turn to the absolute master. Lloyd has averaged 16 per game this season (80% of his total disposals). If the Bulldogs continue this trend it should give Lloyd the opportunity to absolutely fill up. Furthermore, the Dogs have given up the 2nd most points to opponents top 3 defenders through three games this year. I will be linking Lloyd up with other Swans backs throughout a huge number of lineups.

Macrae is another player likely to see a boost from the Dunkley injury. So far since the return of games post COVID-19 he played a significant portion of time on the wing to cover the loss of Hunter to suspension (0 CBAs in round 2 and just 9 in round 3). Last season he spent most of his time in the middle and averaged a massive 115 points. If Beveridge lets him get back to that role, he could easily pay off the massive price tag (although you may as well play the lotto as predict what Bev will do).

Whilst we love him as a player, but it is hard to trust Bontempelli against another potential tag from Sydney’s George Hewitt. Hewitt went to Kangaroos Shaun Higgins and kept the North midfielder to only 41 fantasy points. Without Dunkley in the side it would make sense to send Hewitt to Bontempelli who managed to scrap a 72 fantasy points against Matt de Boer from the Giants. Purely a GPP play only. 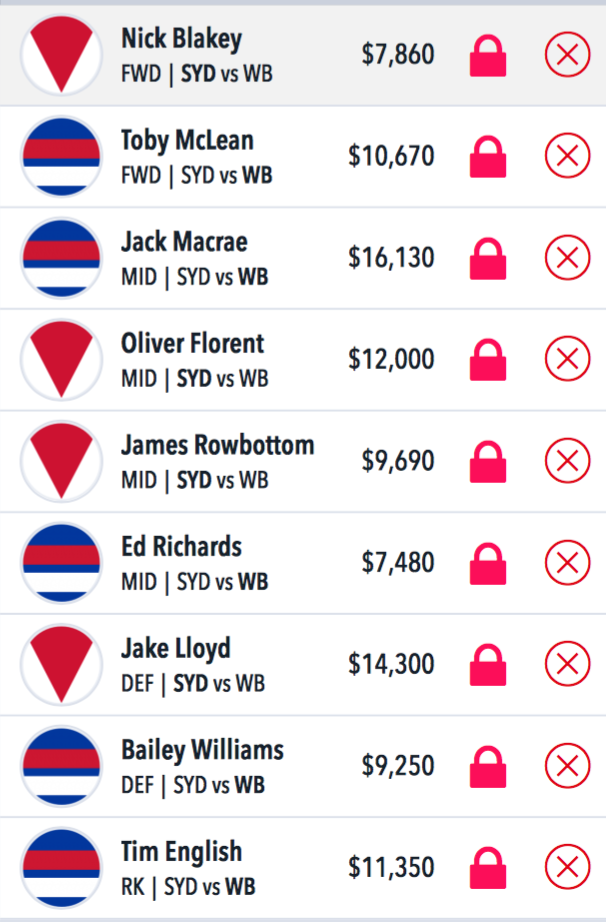 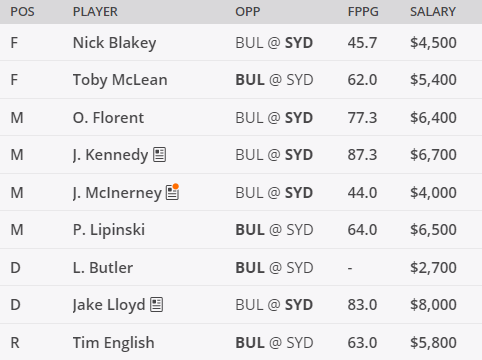