More COVID-19 craziness has led to more schedule rearranging, but the season survives again. We will see Carlton vs St Kilda at Marvel Stadium this Thursday night and the major platforms continue to being the heat with a variety of massive DFS contests:

It is clear that attacking St Kilda through the midfield on this slate is the way to go. They have conceded the fourth most points in the league this season to the opponents top three scoring players at the positions, which is consistent with the fact that they have conceded the most uncontested disposals in the league. I will be looking at Carlton mids who love to get to the outside.

An unusual metric to consider, however we can see both Carlton and St Kilda give up a high amount of points to the lowest scoring forwards of their opponents. This means you can possibly count on a higher floor, particularly from the more fringe players and thus spending down at the position could be the strategy.

Remarkably St Kilda have given up the second most points in the league this year to number 1 rucks despite having a two headed monster of Ryder and Marshall for the majority of the season. Meanwhile Carlton have conceded the third fewest. Ryder is out again, which means all signs point to Marshall, however if you go by the data Pittonet would be a lock and load play on this slate.

Last week I was all over the Saints cheaper backs and if you linked up Coffield with Carlisle you would have been sitting pretty. There has been plenty of possessing of the football across the back line for the Saints this season (who are third in the league for uncontested possessions). Coffield is starting to realise the promise he displayed early in his first season posting back to back 73 and 61 point games, which is huge value at his price point in short quarters.

Members finally got on the end of a few last week against Richmond and paid off his salary with 85 fantasy points (3 goals). On this slate he draws an elite matchup for forwards, a position where the Blues have conceded one of the highest averages in the league this year. Membery has historically correlated well with his midfielders and I will have him capping off a most of my Saint stacks.

Walsh finally joined the rest of his team in the 2020 AFL season last round breaking out for a big 90 point score. Despite this, his price has not really bounced back up and he has an elite matchup on this slate. The Saints have given up the most uncontested possessions in the league so far this season and Walsh’s 13 of 19 touches per game have been uncontested. He also benefits from playing at Marvel where he has averaged 96.4 points per game over his career.

Even though Steele will go to Cripps that hasn't stopped him finding the football himself. He has averaged 113 points from his four career games against Carlton and 95 points per game at Marvel stadium. In their last matchup while tagging Cripps he posted 108 points (including 14 tackles as he gets drawn to the ball) while holding Cripps to 69. This year he has been solid as a rock with only one game below 82 points in the shortened quarters format.

Marshall finally got the ruck role back to himself last week with Ryder being a late out. He didn't miss the opportunity either, getting back to his 2019 form posting 89 fantasy points. If Ryder is out again this week (could be unlikely given it was just soreness) Marshall becomes a lock and load play against Pittonet.

Putting it all on the line with this one. The double fade of a team's two biggest fantasy scorers on a single game slate. Firstly, Jack Steele should go to Cripps who hasn’t really been his devastating self this season anyway. During round 22 last season he held Cripps to just 69 points. Meanwhile I think there is a real chance they use Marsh on Docherty. There isn't a stand out intercept marker that warrants a forward tag, however Docherty has been in sensation form spearheading the Blues attack from defense the last two games. This could backfire miserably, but high risk high reward is the name of the game in GPPs. 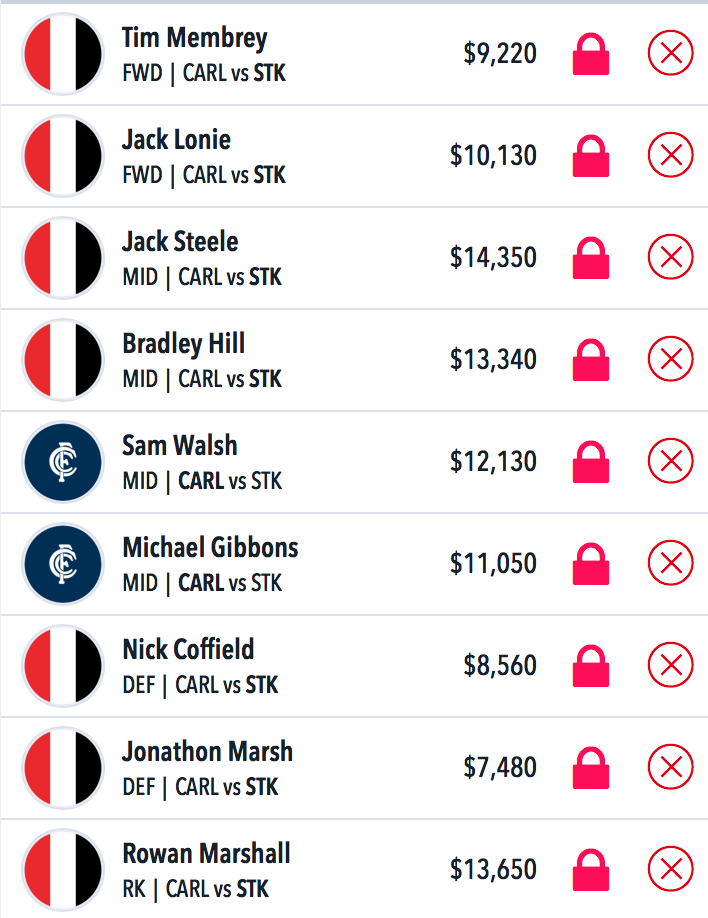 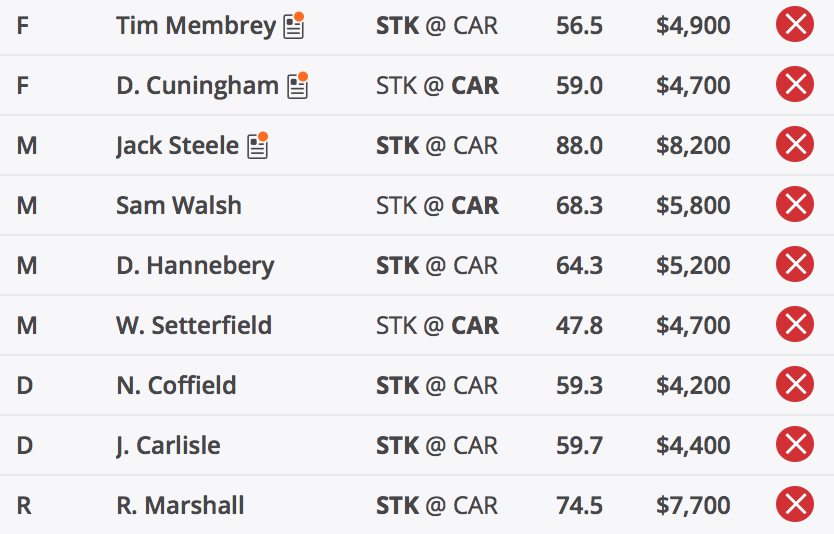