Wowee! COVID-19 will impact the AFL season yet again with Collingwood superstar Steele Sidebottom being suspended for multiple matches after breaching protocol. Circumstances are somewhat fishy at this stage, however from a DFS perspective all eyes turn to what that means for Pies from a fantasy perspective. We break it all down and more to get you ready for the monster contests on offer: 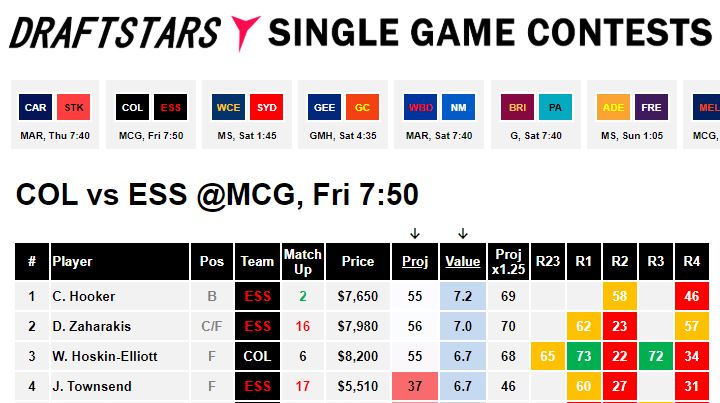 Collingwood are nightmare to put up a big fantasy score against. They love to possess the ball themselves, leading the league in disposals while sitting around league average for disposals conceded. They strangle the opposition through uncontested play (lead the league in uncontested possessions) and won’t let them win it at the contest either giving up the second fewest clearances. Meanwhile Essendon have given up the 6th most points to the oppositions top three scoring midfielders this year. The answer looks simple… Pies stack!

The one position to target Collingwood at is via defenders. They have given up the second highest score to the top three scoring opposition backs this season at 76 points per game. The only quandary is they are just 1 point per player ahead of their opponent Essendon, which means you can really go either way in this matchup.

Next to no help here by the numbers with both Essendon and Collingwood being stingy to opposition number 1 rucks. There are other options on this slate and considering paying down for a Mason Cox or even going with the wild card Shaun McKernan is looking like a solid alternative, particularly in GPPs.

Has seen his midfield time take a boost this season and it peaked last week starting in 10 centre bounces. It has yet to really boost his scores as he only managed 43 fantasy points last week. However, if he can keep up this role he is bound to start increasing his scores and on top of that he hasn't kicked a goal in two of his last three games, meaning that there is certainly a lot of upside that is yet to be tapped into. With Steele out of the lineup there will also be more midifled opportunities either on the inside or out on the wing.

Like the Magpies, the Bombers are also short in the middle playing without Heppell and now losing Merrett to a suspension. This should open up further opportunities, especially on the wing. Last week it looked like Smith picked up extra midfield time with 6 centre bounce attendances and he took full advantage posting an 86-point game. The other juicy prospect from a GPP perspective is Darcy Parish. He has been chained up forward all season except for one quarter of action against Sydney where he went into the middle and unleashed. He has the capability to score if given the opportunity and I will be taking a flier or two that he benefits from the Bombers lack of midfielders on this slate.

Is a lock and load for me on this slate. Playing a significant amount of time forward this season he has managed only one solid score all season (a 101-point game against Richmond). We know he has the upside and given Sidebottom was playing primarily on the wing, Phillips is the logical option to slot right into that role. As we mentioned at the top the Bombers have been giving up points to midfielders this season and I expect Phillips to be in the majority of my teams and all my Magpies stacks.

The Bombers barely have a premium play available with only McGrath topping the $14k mark on Draftstars. The prices on the Bombers are likely to lure us in even though it doesn't appear to be a great matchup for them. I will personally be piling into the Magpies, headed by Taylor Adams, who has taken full advantage of Treloar being out this season averaging 94 points per game despite the shortened quarters. It is an ideal matchup for him playing at the MCG (where he has averaged over 98 FPPG over his career) and against Essendon where he has posted 120+ over his last two games against them (and an average of 101 for his career). 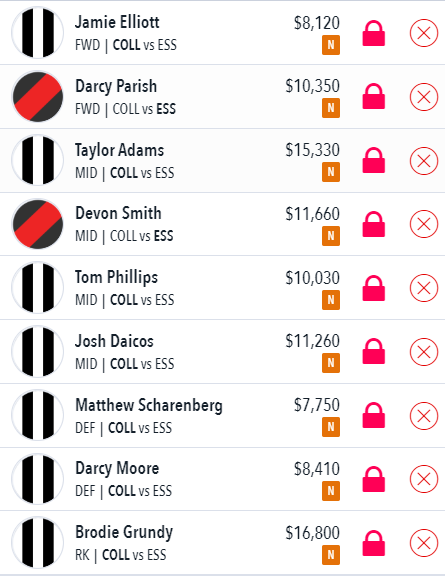 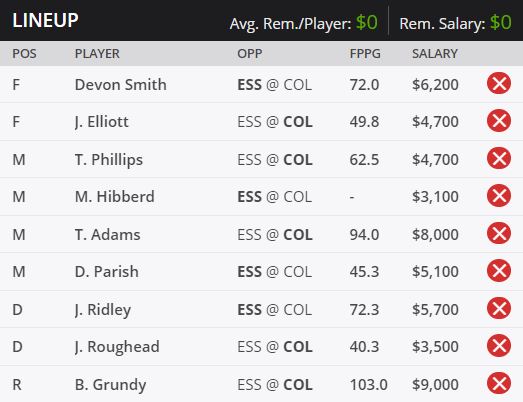