Round we go again with round 6 of the 2020 AFL Premiership season set to kick off this Thursday night. Geelong will face Brisbane on neutral territory at the SCG in a marquee matchup between two of the league's top 3 teams right now according to the ladder. The major daily fantasy platforms haven't let us down either with a range of major contests on offer:

This game isn't going to give us a lot of obvious avenues to attack with Geelong and Brisbane both bottom three for points conceded this season. The Cats have starved the opposition by playing slow possession football (4th in uncontested possessions), while the Lions are contested monsters, applying an incredible amount of pressure and moving the ball as quickly as possible.

Consistent with above, neither the Lions or the Cats have given up points through the middle this season, which means we have to make a choice. To me it will be heavy on the Lions as I believe their setup will restrict the Cats game style and they will beat them at the contest.

Geelong continues to have their troubles in the ruck. This year has been no different after Rhys Stanley went down with an injury, they are now relying on young Darcy Fort. They have given up 79 points per game to the opposition's number 1 Ruckman, which is the 6th highest mark in the league this season. The Lions give up 10 points per game fewer but are splitting the duties between two which has seriously limited their ceiling this season.

This is going to be the chalk play of the slate, so it is going to come down to a call on whether you want to be over the field or under. Simpson is a mature age recruit, which are typically the type of minimum priced debutants you want to pile into. He played a single game in 2018 for Geelong (7 disposals) and 5 games in 2017 (11 disposals per game), which does not jump off the page. However, since then he was moved into the middle at VFL level where he won the competition best and fairest. He has been brought in to replace Jack Steven, which means he should get an opportunity on the flanks and wing to score enough to return value at this price point.

Narkle has seen a price drop after a 41 point performance against the Suns last week. That said he is still averaging 57 points per game this season including two games of 64+ points, which would be value in shortened quarters at this price. Typically, I prefer Narkle at home only, however this slate is looking extremely tight for value so I will be happy to pile into a player who is seeing 10 centre bounce attendances like he did in round 5. This play is made even more attractive by the fact that the Lions give up points to forwards (about the only position where that is the case).

Rayner is ever so slowly edging his way towards a role that sees him receive more midfield time. He had 5 centre bounce attendances last week against Port Adelaide and managed 58 fantasy points. From his last four games he has posted 52+ 3 times despite only kicking 2 total goals. If he can top 50 on this slate it would be sufficient at this price given the last of value. If he can hit the scoreboard a few times he has 60-70 point upside. Both sides on this slate do a great job of limited key forwards, so I will be looking at the smalls.

Nothing easy about identifying the plays on this slate and the ruck is no different. Geelong have been giving up points to rucks all season (and the past few seasons). Unfortunately trying to pick between Stefan Martin and Oscar McInerney who effectively split the position down the middle and both battle to return value is not a promising option. I prefer to roll with Fort, who is cheaper and will spend the majority of his time in the ruck. He posted 65 from 25 hit outs last week against Witts who has historically been difficult to score against.

Lyons has been a fantasy monster this season averaging 94 per game in the shortened quarters. I will be all over stacking the Brisbane midfield on this slate as in my opinion they will likely destroy the Cats. The first point of call will be Lyons as Lachie Neale is priced way up with limited value available.

It is hard to ever call Dangerfield sneaky and it isn't like he will be low owned on a single game slate. That said he certainly burnt a lot of people last week with a dismal 68-point game while everyone was on the Cats stacks against the Gold Coast. The fact is Danger is playing a decent amount of time through the middle this year, with 16 centre bounce attendances last game. He still has shown 90+ point upside this year and if he isn't on the receiving end of a tag (which is unlikely in this matchup) that should always be on the cards.

Neale has been on another level compared to the rest of the competition this season. He is yet to go under 100 fantasy points, which is totally ridiculous in the shortened quarter format. That said his price is through the roof on this slate with what looks like little value at this stage. Eventually someone is going to go with a tag on Neale as well, and in this matchup it could be Cam Guthrie who does the job. Way too much risk for me. 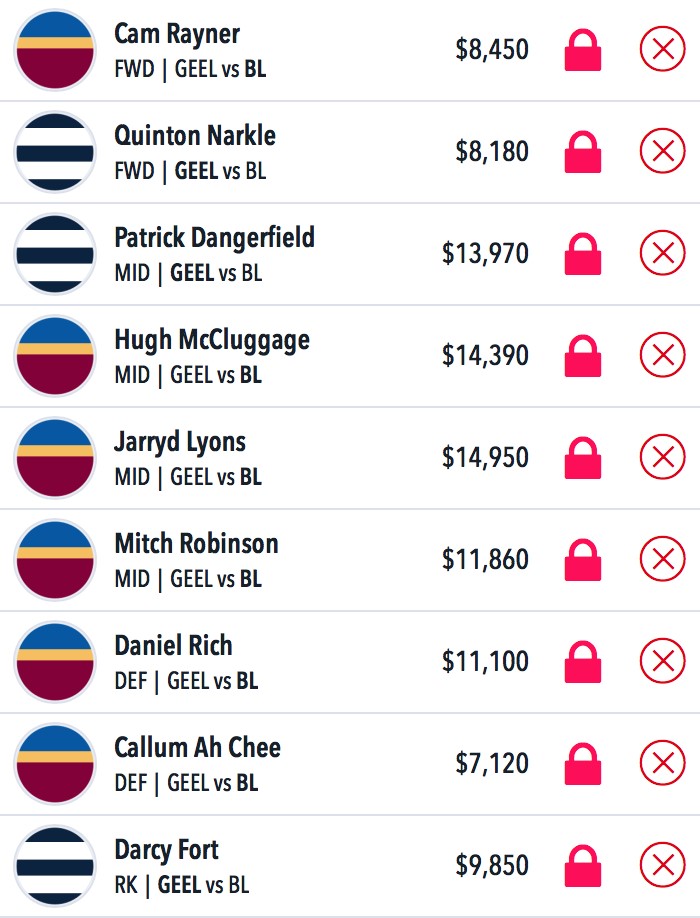 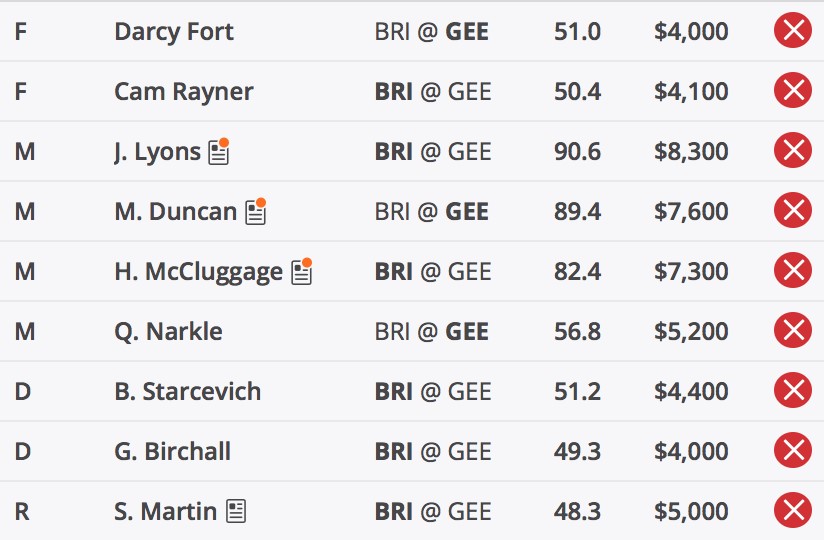