Let’s get up and about to close out another round of the 2020 AFL Premiership season with a ripping 3 game slate of Sunday football. As usual both Draftstars and DraftKings have a wide range of massive daily fantasy contests on offer for us to dive into:

Melbourne have been far and above the best team to attack with defenders so far this season. They are giving up the most points in the league to the position and massive 82 points per game to the top three scorers (6p per player more than the next highest). This number wasnt helped by the way the Cats played last week, however it still looks to be a great spot to load up on Tigers backs.

Next on the agenda we have midfielders against Adelaide. Everyone has seen the Crows getting totally destroyed this season and the bulk of that from a fantasy perspective has been through the middle. They are giving up a ridiculous 101 points per game to the top three scorers at the position (the equivalent of over 120 points per game in full quarter games). This will be an interesting test for the Dockers who don’t necessarily have a star-studded midfield, particularly with no Fyfe. However, there should be some solid value plays we can take advantage of.

Targeting the Giants at ruck is usually a layup when they are on the slate. However, it will come down to whether or not you trust Jonathon Ceglar. If you are nervous with that play it is quite easy to move along to the Tigers who give up the third most points to number 1 rucks this year and load up with big Maxy Gawn for the second Sunday in a row.

Plenty of value on this slate to work through, which means that we can have at it with our choice of premiums as well. Harry Jones is debuting for the Hawks after being highly rated through the preseason before we got hit with the lay off for COVID-19. He has shown the ability to score fantasy points at the lower level averaging 21 disposals and 6 tackles for Box Hill. His opportunity in the midfield at the higher level will obviously be limited, however the ability to find the football is always a positive and he is certainly viable at minimum price.

Pretty much my favourite value play on the slate and I suspect I won’t be alone. In his debut game last week at this level Serong was given responsibility right off the bat going into the midfield in the second half (10 centre bounce attendances) and notching up a huge 60 point fantasy game. This week with Fyfe out I expect his midfield opportunity to still be there and as we noted above this is the best matchup in the league for that position. Lock and load!

Hamill looked like he was on the way to a solid score for his price last week before he was struck down with injury early in the game. Backs against Fremantle have been a solid play historically and at the minimum price there is certainly opportunity to pay off that salary.

My weekly GPP special, key backs against the Hawks. As we broke down last week it has paid off week after week this season, and last week was no different with Robbie Tarrant returning a solid 59 fantasy points despite missing the better part of a quarter with a lame shoulder. Davis is near minimum price, so we won’t need much, expect him to get involved in “chippy chippy” across the back line and stumble his way into a 60 point game.

There isn’t much to say here except for the fact that Cameron is too cheap. He is going to hit fire one of these days and I am going to be on it when he does. We have all seen his upside (north of 150 points in full timed games) and if the Giants can get on top of the Hawthorn Cameron makes a perfect option for GWS game stacks.

Max Gawn has been priced out of this stratosphere so I will be going down to Ceglar on this slate. Ceglar has been owning the hit outs and averaging a solid 75 fantasy points per game this season as the sole ruck for the Hawks. On this slate he faces Shane Mumford who can barely get around the ground and last year was one of the leakiest ruckman in AFL history from a fantasy perspective. Ceglar is forward eligible on Draftstars so consider a dual ruck setup.

An easy choice to attack the Demons via defenders. Houli has a low score of 85 points this season, making him as safe as they come. Given it is the best matchup in the league for his position a ceiling score of 100+ is certainly on the cards. He can be linked with other Tigers backs, or played solo.

He is a bit pricey for my liking generally, however, as I mentioned above there is plenty of solid value on this slate so we can be a bit more liberal with our spend ups. Walters has already shown 100+ upside in the shortened quarters this year and has been receiving a solid dose of midfield time (12 centre bounce attendances last week). Without Fyfe in the lineup they will likely need more experienced players in the engine room, which should open up a bit more time for Walters. The Crows are also the top matchup in the league for midfielders and forwards, which covers every area that Walters will be playing on the field. Giddy up! 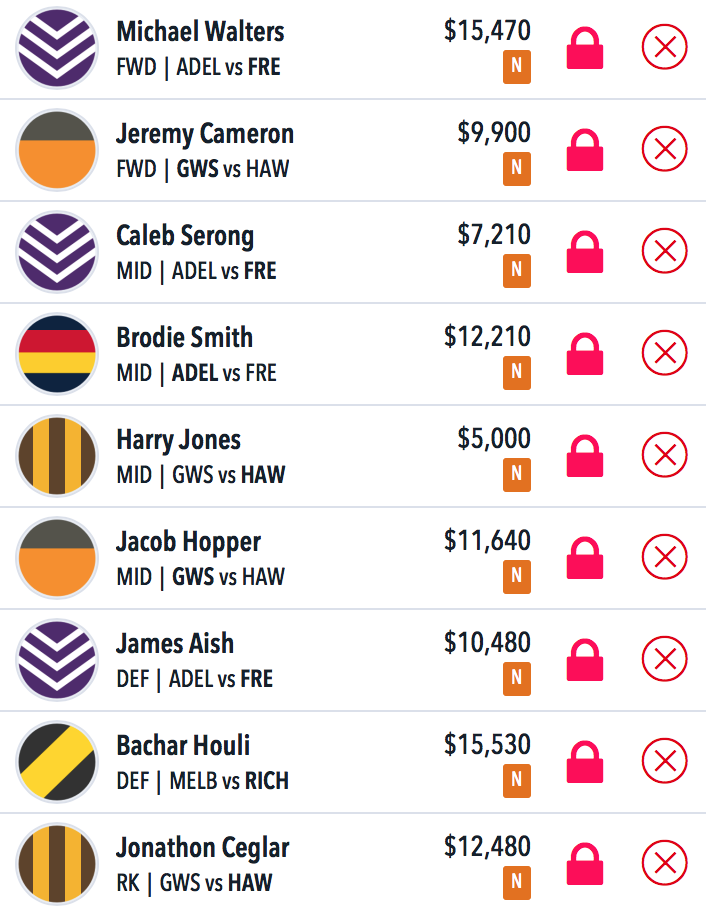 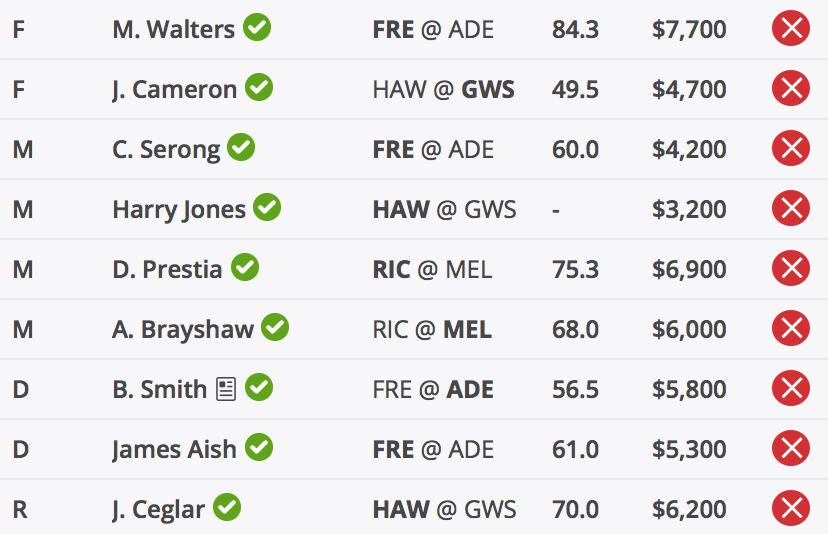