Time to close out Round 6 with a perfect little 3 game Sunday slate for daily fantasy lovers. It will be an all Queensland affair with the three games being held in what is expected to be wet and slippery conditions at both the GABBA and Metricon Stadium. “Hublyf” and “DFSlyf” are both well and truly on with major contests across the platforms:

The Tigers and the Bulldogs stand out as the two teams to target on this slate. Richmond have long given up points to defenders and once again this year they are giving up the fourth most points to the top three scoring defenders at 74 points per game. The Dogs are just 1 point per game behind them at 73, which makes for an attractive target to load up with the league's top rebounding defender in Sam Docherty.

Nothing obvious stands out from a midfield point of view on this slate. I will be avoiding Port Adelaide midfielder as the Giants continue to be one of the stingiest teams in the league giving up the second fewest points to the position. Once again it is the Bulldogs who appear to be the best option to go after.

This is where things get really juicy. The Tigers continue their trend (4th straight year now) of giving up boat loads of points to the ruck position. Conceding a massive 93 points per game to the number 1 ruck they stand 4 points per game above the next highest, which coincidentally is the GWS Giants. Everyone's favourite target, Tim English, is also on this slate and he has been conceding a healthy 81 points per game this season (fourth highest mark in the league). 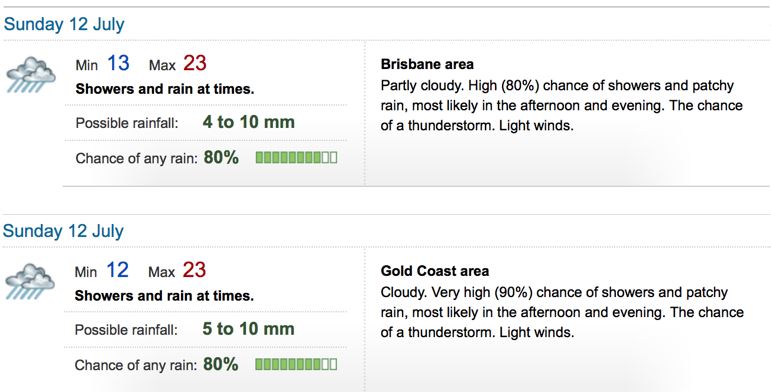 With all three games in Queensland we must point out the expectation of significant rain for both Brisbane and the Gold Coast. It is not likely to hit until the afternoon/early evening, which means it will have a greater impact on the Richmond vs Sydney and Carlton vs Western Bulldogs games.

In these contests focus on rucks, as wet weather will typically result in greater number of stoppages, as well as contested players who love to tackle.

Aliir Aliir took the lead ruck for the majority of the game last week, while Hayden McLean played up forward. He was in 85% of the center bounces and while he managed just 31 fantasy points and 5 hit outs it was against one of the toughest opponents in the league to notch up scores against (Nic Naitanui). This week, however, he draws the easiest matchup in the league in Richmond, the weather is to be wet and gives you a value option with the flexibility to play as a defender that should bring a very safe floor in this game.

Stephens is making his debut as pick number 5 for the Swans in the most recent draft. He was a prolific ball winner in under ages, which is what we want to hear! He also had significant experience playing at senior level with 13 matches last year in the SANFL where he continued to show capability to find the football averaging over 18 touches en route to 78 fantasy points per game. With both inside and outside capabilities he projects as an elite play on this slate for the minimum price (expect him to be very highly owned).

While the data might not point this out, Soldo will be getting one of the top matchups in the league for his position against Aliir Aliir. Plain and simple, he is not a natural ruck by position and as such Soldo should dominate the ruck contests and if the weather hits there will likely be many!

There is some threat here that Curnow goes to ‘the Bont’ who has been a fan favourite of the taggers this season. Last week most of us were caught totally unaware as North Melbourne brought out the tag and totally squashed Bontempelli to the tune of just 48 points. Curnow doesn't typically apply a hard tag and I expect a bounce back game on this slate. His upside is 100+ and is very attractively priced.

He’s a mudda! His mother was a mudda! His father was a mudda! That’s right, we are expecting wet conditions and a contested game style that will suit Graham down to a tea. Typically, his best scores are characterised by a large number of tackles and this matchup should lend itself to that. Furthermore, with Prestia and Cotchin out of the game, Graham should see a significant amount of midfield time.

The wet conditions may be a worry, but Lloyd has an elite matchup against the Tigers on this slate. As mentioned at the top they have been one of the best teams to target with defenders for some time, particularly the elite scoring defenders. Lloyd has shown huge upside in the shortened quarters (already going for over 110 points this season). If the Tigers start hemming the Swans into their back line expect a large number of +6s through little chips across half back. Lloyd’s recent history against the Tigers has been ridiculous - last four games include 135, 125, 91, 131.

I love the conditions and the matchup for Cripps on this slate. Wet and slippery, leading to a contested game style will suit his attributes completely. In addition, as noted at the top the Bulldogs have been one of the better teams to target through the midfield this season.

FADE OF THE DAY - Josh Kelly

Cam Suttcliffe has come in to do a job on someone - I suspect Josh Kelly. If not him, Lachie Whitefield. Be wary on either. 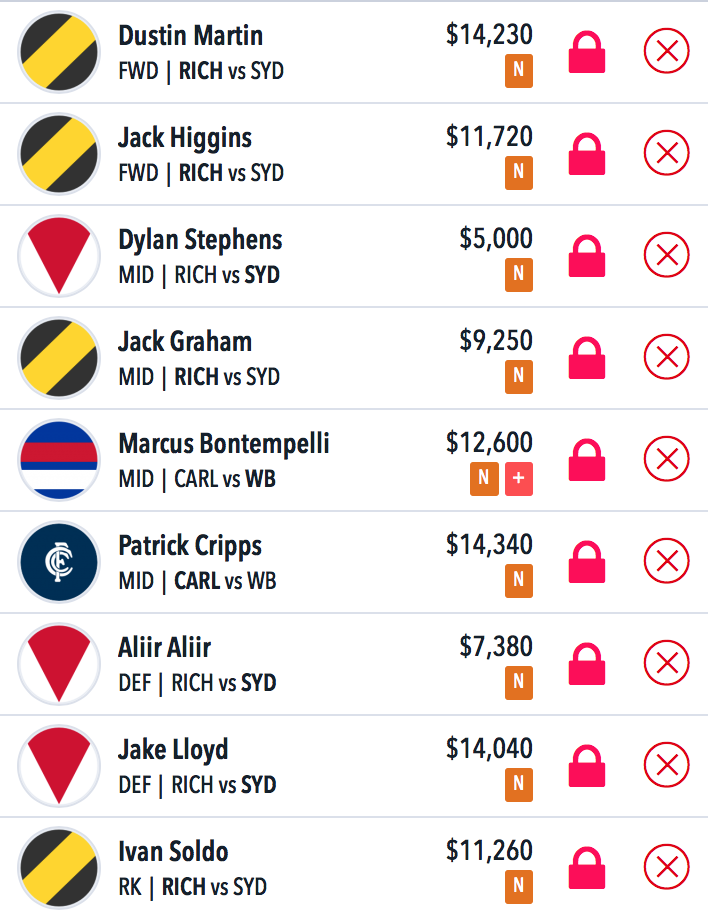 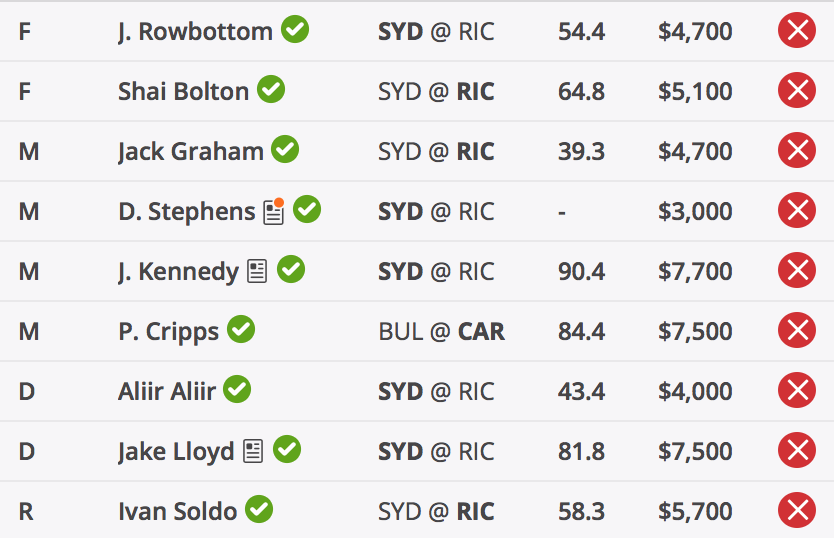