All clear on the Gold Coast for this matchup, which means we can finally ignore the weather for the first time in a while.

Backs against the Tigers continue to be a thing this season with them giving up the 6th highest mark in the league overall. It stands out even further for the top scoring backs where the Tigers sit behind only the Hawks for points conceded to the top 3 scoring defenders this season (at 6.3 points per game above the league average).

Neither the Bulldogs or the Tigers have employed a tag this season according to our taggers tool. That is always a good sign for playing midfielders and we can see that the Bulldogs are 5th for points conceded to the position, while also giving up one of the highest floors in the league (3rd highest bottom three average).

This is where things get juicy. Tim English has blown the doors off this season (before falling right back to earth last week against Witts in difficult conditions). This should be the perfect bounce back matchup as the Tigers have given up 81 points per game to the number 1 ruckman this season, which is the 3rd highest mark in the league this year.

After an absolutely sensational rookie year last season it appeared that maybe the COVID-19 layoff had gotten the better of Stack this season. However, after being dropped for a number of weeks he has worked his way back through the scratch matches and the Richmond camp has been raving about the improvements he has made. But the real reason Stack becomes so attractive on this slate is that he has reportedly been playing through the midfield during the scratch matches with impressive results. Given the Tigers are so depleted through the midfield he will likely get the opportunity and in that case his price point is simply too low for this role.

Bolton once again had difficulty going on with things int he second half last week but was able to push the score higher than the previous two weeks with a 61. That is still around par for his price points, but as we mentioned in the preview last week, we have to love his role through the middle.  He topped the entire Tigers team in the last match with a massive 17 centre bounce attendances. While Trent Cotchin will return to a midfield role, he replaces Jack Graham who was also playing plenty of time in this position, so I don’t expect there to be much change for Bolton. He brings a massive ceiling as we saw last year when he played a midfield and was able to top the 100 point mark.

Liberatore is firmly in the four midfielders used by the Bulldogs currently. With 12 centre bounce attendances for 71 fantasy points he makes the perfect play from around this price point.

Before last week’s 41 point performance last week in wet and slippery conditions against a stoppage beast in Jarrod Witts, English was absolutely on fire. With a 5-game average of 94.8 points (in shortened quarters) he was beginning to put on display the potential (especially from a fantasy perspective) that we had all seen the last few years. On this slate he draws one of the top matchups in the league for his position and if they don’t run with a similar ruck tag type role that the Suns employed last week he should be free to rack up touches around the game.

Anytime you can be 100% certain that Bontempelli will not be getting a tag or substantial defensive attention applied he almost always becomes a lock for me (especially when his price isn't maxed right up). His last three games have been 88, 81 and 86 and against the Tigers who have not tagged for 3 years a score in a similar range should essentially be a lock. 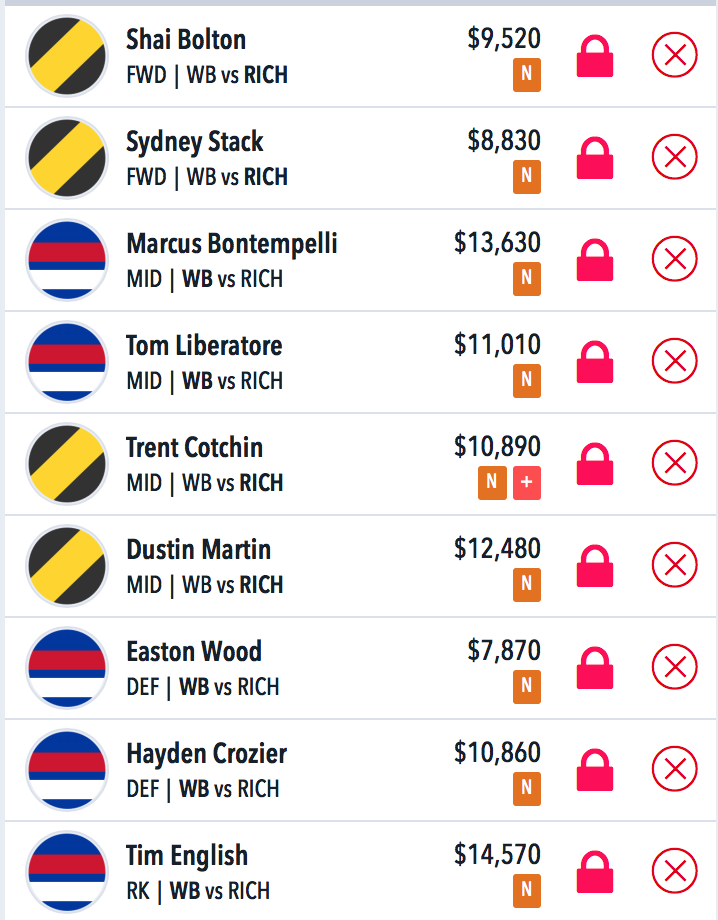