Well the AFL season is still currently set to kick off under extremely unusual circumstances (with the decision to be made on Wednesday). With the cloud of COVID-19 hovering over everything in the world now, including the start of the AFL season, we really don’t know anything for sure as yet except there will be no fans in attendance and the season will be shortened. But as it stands Richmond and Carlton are still expected to kick off the 2020 AFL Premiership Season at the MCG this Thursday Night.

For all us DFS lovers the major platforms have delivered in spades with some monster contests on offer:

Obviously, each season is a new year and trends from 2019 aren’t typically going to remain the same, that said it is still a great starting point to gauge what we can expect heading into this contest.

Throughout the Tigers' run over the past three years they have been synonymous during the season as a fast moving team that doesn’t over possess the football or tag opposition players. As a result they often conceded large fantasy scores. As we can see last year they gave up the most 100+ scores at 4.2 per game, which means we can feel free to unleash the Blues big scorers, starting with Patrick Cripps in this matchup.

On the flip side the Blues were often destroyed by opposition midfield, giving up the second most fantasy points to the position in 2019. This is no real surprise given the Blues finished 16th and were arguably the worst team through the first half of the season. As a result, we can obviously load up on Tigers through the middle, particularly thinking the mid-range priced players.

Pick your poison here as both Carlton and Richmond were beaten up in the ruck last year. A lot of this will come down to selection, particularly if the Tigers go with the dual ruck approach.

Liam Baker (DS $8,220) was one of the young group of Tigers that really came on strong in 2019. He took full advantage of his opportunity as the Tigers battled injuries to start the year, playing 19 games and becoming a premiership player after playing in just 3 games the season before. He showed a high ceiling with four games of 88+ (including one 100+ game) and has also settled into a fantasy scoring role across half back with stints up on the wing. Through the pre-season he started on the wing 8 times in the first contest, and then 18 times in the second game. At this price point I love that role for Baker in this game.

Zac Fisher (DS $7,850) something to get used to at this point in the season is the focus on players' roles heading into the season. Zac Fisher is a player that looks to be set for an increased role through the midfield this season with the Blues. Through two preseason games he averaged 11.5 centre bounce attendances and returned an average of 20+ possessions to go with 70+ fantasy points. He is a great option to help find salary relief on this slate.

Shane Edwards (DS $11,900) was critical in the Tigers 2019 premiership season, with a late move to the midfield he was unleashed averaging 90+ fantasy points over his last 7 games. This included two ceiling games of 127 and 118. His only preseason game didn't dispel the notion that he was going to play a different role this season with Edwards starting in 13 centre bounces,

Josh Caddy (DS $9,970) has finally made the move from a stay at home forward to the middle of the ground. One of the wings at Tigerland will be his, with Caddy starting there an average of 21 times per game during the pre-season. We saw the possibilities of his fantasy scoring from this role in the grand final last year where he posted 100+ fantasy points and I will be locking him for round 1 at this price point.

I will be spending up on the Blues through the middle. As we noted in the breakdown above, despite being four goal under dogs I expect the top Blues midfielders to notch up fantasy points as the Tigers certainly won’t be tagging either player. In the single-entry contest, raw points are the target, Patrick Cripps averaged over 110 in the two games against the Tigers last year, while Walsh is fresh off one of the best rookie seasons of all time. I will be locking these two in and rounding out my team with the mid-priced Tigers. 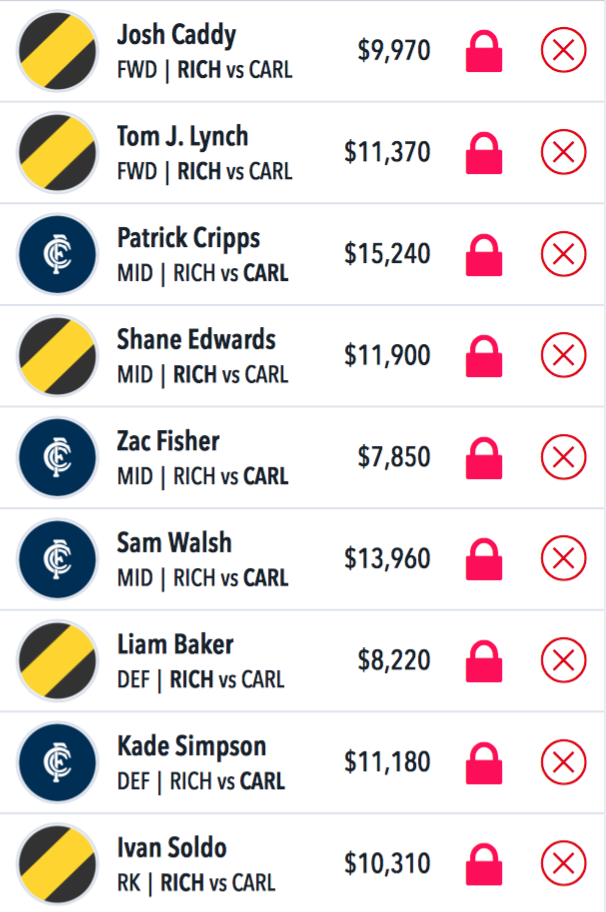